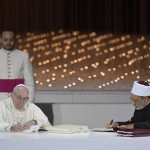 Nothing is born out of nothing. Not even Pope Francis’ trip to the United Arab Emirates. The first Pope to travel to a country in the Arab Gulf, Pope Francis brought back home a joint declaration with al Azhar university that underscores that no violence can be applied in the name of God; that citizenship is something not connected to religion; that freedom is everybody’s right, and includes religious freedom.

These are not issues that can be taken for granted, when it comes to the Islamic world. Because citizenship, in Islam, is always connected to the faith you profess. Because, where Islamic law is understood and applied literally, conversion to another religious confessions is still considered apostasy and condemned. And because acts of terrorism have often been justified as part of the “jihad mandate”.

These are not issues that can be taken for granted, though there is a path within Islam to overcome these notions, and even to go beyond the literal application of the Quran. This path led to the Marrakech declaration in 2015, to the Beirut Conference in 2016, to the International Conference for Peace of Cairo in 2017, to the Islamabad Declaration in 2018, and finally to the conference on Human Fraternity in the Arab Emirates.

A main blazer of this path is the Council of the Elderly, established in 2014 and led by Ahmed al Tayyib, Grand Imam of al Azhar. While not all of the Islamic world is in this path, it is anyway a beginning.

It must be said that, back in 2006, few would have thought that Islamic scholars could sign a declaration like the Abu Dhabi one. During those years, a dialogue with Islam was feared, or carried out with a sort of inferiority complex. There was a fear to spell out with the Islamic world the real nature of the issues.

Then, in 2006, with Benedict XVI’s Regensburg lecture, everything changed.

The lecture generated some turmoil, which is still reverberating. The turmoil was focused just on an excerpt of the conference, which was a quote of a quote that stated that Islam had done nothing but violent and evil things.

That quote was just part of the lecture, and Benedict XVI used that quote to launch another big topic: that of the impossibility of faith without reason. Being at the university of Regensburg gave him the idea. He taught theology in that university, and this showed, Benedict XVI said, that “even in the face of such radical skepticism it is still necessary and reasonable to raise the question of God through the use of reason.”

In Western civilization, Benedict XVI noted, reason was becoming detached from God, and he criticized that. He also pointed the finger at the secularization of religions, and questioned the abandonment of the idea that “not acting reasonably is contrary to God’s nature.”

The lecture was not an exercise against Islam, thus, but rather an indictment of the Western world, and on a wider scale of the radicalization of religious thought, an outcome of the withdrawal of reason.

That passage of the lecture is still criticized, because it is not understood. But many did understand it. It was understood by the 138 Muslims that sent an open letter to Benedict XVI, “A common word,” which started a Muslim-Catholic dialogue that had not existed before.

That passage was also understood by intellectuals, and by countries. Some numbers help to explain it . Benedict XVI inherited a Holy See with full diplomatic ties with 177 States. In seven years of pontificate, the Holy See opened diplomatic ties with Montenegro (2006), the United Arab Emirates (2007), Botswana (2008), Russia (2009), Malaysia (2011) and South Sudan (2013). None of these six States is Catholic. Three of them are Muslim, two Orthodox and another one mostly Anglican-Methodist.

Of these States, the United Arab Emirates began under Benedict XVI a path of dialogue that led them to host the conference on human fraternity.

Benedict XVI also shaped all of his diplomatic activity around the notion of truth. The diplomacy of truth was a slap in the face to many. And it was also for al Azhar University, that broke relations with the Holy See after Benedict XVI denounced the 2011 Alexandria bombing, that targeted the churches of Coptic Christians.

Relations with al Azhar were restored in 2016. But this was not just because the dialogue maintained with Pope Francis. It was also because the same al Azhar started rethinking itself, and this path began under Benedict XVI. The establishment of the Council of the Elderly, in 2014, can also be considered part of a conversation that, in fact, began with the Regensburg lecture.

Benedict XVI described the issues, saw the danger coming and faced it. The uprise of the Arab Springs was incredibly anticipated by a special Synod for the Middle East in 2010. This is clear by reading Ecclesia in Medio Oriente, the post Synod exhortation that Benedict XVI gave in Lebanon, during the last trip of his pontificate.

Over these last two years, Pope Francis has multiplied contacts with the Muslim world. His approach is different from that of Pope Benedict. He does not set the gaze on the wide issues, but rather fosters the so called “culture of the encounter” for the most. Pope Francis’ approach to issues is pragmatic.

Even this approach, as well as the sympathy credited in advance to the Catholic Church in this dialogue, is an outcome of that harsh discussion that dates back more than 10 years. The accusation raised against Benedict XVI that he did not respect Islam came, in fact, from the secular world Benedict XVI criticized.

Benedict XVI understood that decades ago. He wrote about it, shed light on it and finally clearly denounced it in the Regensburg lecture. Large parts of that lecture were dedicated to the fact that theology was always more disincarnate from reason.

The Abu Dhabi declaration in the end reiterated the principle of faith supported by reason. We finally got to the big issue. In the end, when it turns to real issues, Benedict XVI is always a reference point. Even the diplomacy of truth came back on stage when the Pontifical Council for Interreligious Dialogue issued, in August 2014, a declaration against the Daesh.

These are the reasons why Pope Francis’ trip to the Emirates is Benedict XVI’s great vindication, as it harvests the fruits of a dialogue that began long time ago, was strengthened through reasonable discussions, and supported by strong faith identities.

Six years after the historic Benedict XVI’s renunciation, though, it can be said that Benedict XVI and his pontificate were not understood at all, since it was really larger than its time, and identified trends before they clearly emerged.

Now, retired on the mountain, held in great esteem by Pope Francis —who recently underscored again his merit in countering the sex abuse scandals— Benedict XVI intercedes for the Church. From that far position, despite all the limits imposed by the current situation, he can begin to see part of his work flourishing.