Synod of Bishops, hope in the peripheries Pope Francis, a romanticized papacy?

Indeed, Pope Francis is right: Benedict XVI still has much to give to the Church 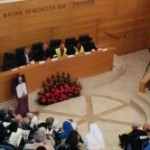 A text Benedict XVI sent on October 21 to the Pontifical Urbaniana University of Rome has shown that, indeed, Pope Francis is right when he underscores that the Pope emeritus is an institution the Church must not fail to benefit from. In four pages – sent to thank the University for having named its Aula Magna after him – Benedict XVI summarized the challenges the Church faces today. Furthermore, his words may sound like a response to proposals and ideasfor the Church that many – especially the secular media – promote. As if the Church were a democracy which doctrines may be set asideby public opinion.

Benedict XVI’s intent was certainly not that of addressing the current debate. On the other hand, when thoughts are so well articulated and reach a peak, it is natural to apply them to daily life, and to try to understand daily life through the lenses of that thinking.

The Urbaniana University being the university of missionaries (run by the Congregation for the Evangelization of Peoples), Benedict XVI reflected in his text on the notion of mission. He himself was among the experts called to re-draft the Second Vatican Council document on missions “Ad Gentes”.

The Pope emeritus stresses that many question whether «mission is still a current challenge» and their skepticism drives them to wonder if it would be «more appropriate to come together in dialogue among religions to serve jointly the cause of peace in the world.»

Benedict XVI goes even further. He asks whether dialogue can replace mission, since «nowadays, in fact, many think that religions should respect each other and, coming together in dialogue, become a common force for peace.»

The text reflects a very current situation. Recently, the former Israeli president Shimon Peres, on the heels of the historical prayer for peace in the Vatican Gardens, asked Pope Francis to endorse the promotion of a “United Nations of Religions”. Wisely, Pope Francis asked the appropriate Vatican dicasteries to study the issue. Pope Francis has always wanted to promote a culture of the encounter. But he also knows that an organization like a United Nations of religions (and in any case there are already many such type of organizations) would lean towards secularizing the role of religion.

Benedict XVI’s consideration of the question of truth is specially pertinent in this regard. The notion that religions should be in a constant dialogue with each other, as equals, for the sake of peace has as its premise that «the different religions are variants of a single and equal reality,» and that «religion is a common genre that takes on different shapes according to cultures.»

This way – Benedict XVI reflects – «the issue of truth which,more than anything else,originally moved Christians is now put in brackets.» So, the truth is put aside, since it is deemed impossible to get to it, and this renunciation appears as «realistic and useful to peace among the religions of the world.»

However – Ratzinger admonishes –renouncing to the truth is «lethal for faith. If everything is reduced to ultimately interchangeable symbols, only capable ofstaring from afaratthe inaccessible mystery of the divine, faith loses its binding character and its seriousness.»

A risk that the Pontifical Council for Interreligious Dialogue has tried to avoid with a strongly-worded declaration issued in August stigmatizing the horrors of the self-proclaimed Caliphate in Iraq and asking religious leaders, especially Islamic, to take a strong stance against the massacres and discrimination perpetrated against religious minorities. That declaration represented the change of pace of Pope Francis’ diplomacy: from the diplomacy of prayer and dialogue to that of diplomatic activity founded on the truth.

Benedict XVI starts from his favorite topic, that of the search for the truth, to shed light on the direction that Christian thought should move toward. He provides two starting points, both of them full of insights to understand today’s reality.

What’s the mission of a Christian today? Benedict XVI says that there are religions that are expectant – i.e. religions that are living their historic moment and yet they are waiting for a bigger encounter that would move them to their fullness. «As Christians, we are convinced that they are silently awaiting the encounter with Jesus Christ, the light coming from him. The light that alone can completely lead them to theirtruth. And Christ awaits them. The encounter with him is not the irruption of a foreigner that destroys their culture and history,» explains Benedict XVI.

He then reflects that «while in the countries where it has a long history, Christianity has become somewhat tired and some of the branches of the big tree which grew out from the Gospel’s mustard seed have become dry and fallen off, the expectant religions encounter with Christ gives birth to new life. Where before there was just tiredness, new dimensions of faith arise and bring joy.»

It is striking that the just-concluded synod of bishops has really shown that the hope for the Church lies in the peripheries, and that these peripheries are the most unexpected, those of Eastern Europe and Africa.

Another aspect of the discussions at the synod of bishops is also striking: the debate was often polarized, moving completely to casuistry or to popular piety, as if the theologian Karl Barth axioms had been turned upside down. Barth contraposed religion and faith, underlining that the former was an arbitrary behavior of man trying to grasp God. For this reason, he theorized about the need for a faith without religion. But in the synod of bishops it seems that religion took the upper hand, since what it always stressed was the need to go to the encounter with the faithful the way they are, without even trying to explain the truth of faith.

Ratzinger considers Barth’s axioms «unacceptable,» and it is easy to reach the conclusion that he would find the turned-upside-down axiom equally unacceptable. But he also criticizes «the position of those who want to convince us that religion as such has been overcome» because «only critical reason should guideman’s actions.» This is not a victory for the purity of thinking. Benedict XVI underscores that «the human person is diminished, not made greater, when there is no longer space for an ethos that, on the basis of its true nature, transcends pragmatism; when there is no longer space for turning our sights to God.»

This was exactly one of the criticism of the Synod’s midterm report, which was a quite accurate snapshot of reality but almost without any reference to the Gospel, deprived of an expectation of Christ which is now deemed almost irrelevant for evangelization. It is the sign of a Christianity which hasgiven up shaping the world.

Perhaps, the last synod of bishops lacked the joy of communicating the Gospel – which lives on, in the more unlikely of peripheries. Perhaps the debate has somewhat reduced the Church to a political-like body in a dialectic between a majority and an opposition. Many issues were at stake, but in the end it is as if it was all about a referendum about Catholics divorced and civilly remarried, and about homosexual couples. It was undoubtedly the media’s fault, but it was also in part the fault of bishops, not really aware of the issues. And the fault of Catholic communications, which has been jaded on thesetopics. This calls for self-reflection. Communicating and discussing just some of the issues, speaking above all of casuistry, has led to failure in transmitting the joy of the Gospel.

Like Francis, Benedict wants a Church able to transmit the joy of living according to the Gospel. Pope Francis often speaks about an outward-looking Church. But an outbound Church that is shaped by the language of the world risks to become a Church which adopts the mechanics of the world, but fails tochange hearts through an encounter with Christ.

Ratzinger clearly states it: «We will be announcers of Jesus Christ only when we truly find him in the depth of our existence, and when, through the encounter with him, we receive the gift of the great experience of truth, love and joy.»

This joy has been missing in the missionary effort inrecent times, as the long standing missionary Piero Gheddo has explained. This joy is at risk of being left out of sight in discussions about the way, and tools, to communicate the Gospel. The inner sense of the Gospel and the Gospel itself seem to be out of the discussion.

This short text by Benedict XVI brings us back to the fundamental issues, which are needed for man to understand his faith. Reaching the core of the issues, Benedict XVI does not set aside any of the current challenges. He looks at the roots of them. He does not propose any “emergency bandage” solution borrowed from earthly realities. He provides a very precise ideal.

This ideal should be at the forefront, but seems instead to have been left aside.It happened with the synod of bishops, but also in all the discussions on the future of the Church that have been proliferating since Pope Francis was elected.

While the Christian doctrine has been watered-down in a political-like discussion, while the missionary effort and the wish to search for the ultimate truth seems to be lost, Benedict XVI shows he can still give a lot to the Church, and Pope Francis is perfectly right in stressing it. This is the Benedict XVI who serves Pope Francis as a hidden advisor. In the spirit of service to the Church that has always characterized him.

4 Responses to Indeed, Pope Francis is right: Benedict XVI still has much to give to the Church