Is Pope Francis at risk in the Vatican London trial? 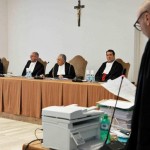 An old juridical principle is that “Prima sede a nemine iudicatur,” i.e., the head seat cannot be prosecuted by anyone. And it is the principle that the Vatican prosecutors seem to invoke when, in the interrogation of Monsignor Alberto Perlasca, whose audio was leaked, they say that no, Monsignor Perlasca would not want to contradict the Pope.

The same promoters of justice (the Vatican prosecutors) did not fail to use the decisions of the Pope to modify the rules of the trials with four rescripts in the process in progress, in a procedure that would be invalid in any country. And the same promoters of justice, in the first hearings of that process, had emphasized that, after all, the Pope’s decisions had to be accepted because he was an absolute monarch and even divinely inspired.

For this reason, they explained, the Pope cannot be considered a witness, even if on some things he certainly made statements to the promoters of justice. For this, they stressed that the Pope could not be guilty, not even when photos show that he was at least aware of the most controversial details of the financial transaction.

It was, however, a reasoning that was not based on solid legal bases. To highlight the problem was Marco Felipe Perfetti, who noted how the new Fundamental Law of the Vatican City State promulgated on November 26, 2000, had changed how legislative, executive, and judicial powers were exercised, which remained firmly in the hands of the Pope.

In short, the Vatican remained an absolute monarchy. Still, John Paul II had established that legislative power should be exercised in an ordinary vicarious form by the Pontifical Commission of the Vatican City State, except in cases that “the pontiff intends to reserve for himself or other instances. ”

This does not mean that there is an actual separation of branches in the Vatican, but rather that there is now a different distribution of functions.

Furthermore, since the 2008 law, canon law is no longer one of the primary sources of Vatican law but “the first normative source and the first interpretative reference criterion.”

It was, Perfetti notes, a necessary evolution to integrate even better the sources in the legislation.

This principle, however, holds in canon law. The Pope does not have the same “position of primacy over temporal sovereignty which, by his own undisputed and recognized moral authority, he enjoyed at the time of medieval Christianity,” notes Perfetti.

It was, continues the canonist, Pope Francis himself who laid the foundations for the activity of the State to be “supervised or judged” by other authorities, such as the Convention on the Rights of the Child or the Monetary Convention with the European Union. The Convention, in particular, allows the European Commission to examine the State’s work in this matter.

The power of the Pope himself – explains Perfetti – is not unlimited, but “limited within limits set by divine law, natural and revealed, and by the needs of the Church which, in the various historical circumstances, determine the way the Petrine ministry acts.”

These issues are thought-provoking. If combined with principles of international law, we can better understand the cul de sac in which the Holy See has gotten itself into with this process. It is worth noting, for example, that with the Monetary Convention signed with the European Union, the Holy See agrees to refer disputes to the Court of Luxembourg.

In short, the fact is that the Pope and the Holy See can and must be tried by international courts in temporal affairs. The Holy See is not above the parties but is a party to the dispute within a more extensive global system. And the Holy See has always been aware of this.

With his rescripts, with his decisions that directly influenced the trials, Pope Francis has instead shown that he does not fully understand that it is no longer the era of the Pope King, not even for the Holy See. Therefore, his absolute powers must be placed in a context.

Paradoxically, while he criticized the mechanisms of wielding power created in the Curia and acted to try to break them, Pope Francis nevertheless created an even more absolute power for himself. He centralized the decisions and did not consider the legal framework in which many decisions occurred. This process, after all, is a clue. Moreover, it presents a more significant problem, a legacy of the pontificate that any successor will have to deal with.

The Pope leaves a situation to be rebuilt, not simply amended. And everything, after this pontificate, will have to be called into question. Meanwhile, the Papacy as an institution will find itself at the mercy of the secular powers it has fought for centuries, judged by international courts that will have no scruples in trying to subject the Holy See to their will.

There have already been experiences of undue pressure, including on the doctrine of the Church, in the past years, in the UN committees overseeing the implementation of the Convention on the Rights of the Child and the Convention Against Torture. There will be others.

At that point, it may be too late to fix.

5 Responses to Is Pope Francis at risk in the Vatican London trial?