Is Pope Francis Really Under Attack? 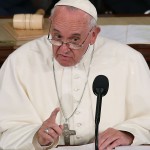 The case of Fr. Thomas Weinandy, OFM Cap., provides food for thought. Consultor of the Commission for the Doctrine of the Faith of the US Bishops’ Conference, Weinandy was asked to resign from his post after a letter he had sent to Pope Francis was made public. In the letter, Weinandy criticized the Pope for “demeaning” the importance of doctrine and having committed “calumny” against some of his critics. The letter, however, also affirmed a faithful adhesion to the papacy and a love for the Pope – Fr. Weinandy said he prayed for the Pope every day.

What happened is not striking, though it should be. A well esteemed theologian offers a firm and thorough critique to the Pope. This theologian is then asked to leave his post for reasons of inopportuneness. However, the bitterness of the reaction gives us a clue of just how advanced the debate over the Pope has become.

Every situation in the Church now creates two opposing sides: the Pope’s supporters and the Pope’s critics. From both sides, the tones of the discussion have often become harsh, and the result is that of a cold war. In the end, in a war there is almost always a side that loses, and then complains about the defeat. What never happens during war is a lucid look at the past. The past, in the end, helps to relativize the issues.

Currently, one hears the narrative about an unprecedented attack against Pope Francis. This narrative notes that Pope Francis’s critics exploit every detail of the Pope’s actions in order to criticize his behavior, his words and his teachings. The truth is that criticism of popes is nothing new. It became somewhat more public once the mass media jumped in. But even this media pervasiveness is not new, in the end. It’s just that now the media has a wider reach.

Let us look back to history.

Blessed Paul VI was profoundly criticized during his pontificate, and critics mostly came from within the ranks of those Catholic who enthusiastically hailed his election. The Pope of the Second Vatican Council was in fact called to balance the post-Second Vatican Council period in the Church. Paul VI endured many demonstrations of dissent, the most clamorous one being the (secular) media campaign built to criticize his encyclical Humanae Vitae.

Paul VI was also attacked by critics from the inside – like that, for example, of the historian Franco Bolgiani, close to Cardinal Michele Pellegrino, Archbishop of Turin. The story is told in a paper by an Italian veteran Vatican watcher, Luigi Accattoli. During an Italian Ecclesial Conference, Bolgiani delivered a lecture in which he insisted that “Paul VI’s election meant, for the whole Catholic world, and particularly for Italian Catholicism, a great promise,” but Bolgiani added that the pontificate included “signs of corrections and changes of direction” – this is how Catholics described the situation, while secular media used to refer to “turnabout and failure.”

Vittorio Gorresio, in a 1973 book called “The Pope and the Devil,” observed that “the 10 years of Paul VI’s pontificate are a never ending attempt to establish a dialogue with the contemporary world. In this dialogue, Paul VI was not able to succeed.” The reason was – Gorresio said – that the Pope introduced the ancient idea of the devil into the dialogue.

In the end, which was the model of the Church that Paul VI’s critics were looking for? It was that of a secularized Church in dialogue with the contemporary world, using the latter’s secular language.

This model of Church was at the basis of the many criticisms against St. John Paul II during his pontificate. The 62 theologians’ and Catholic scholars’ recent letter to Pope Francis, which criticized his position in Amoris Laetitia, is not an exceptional case. St. John Paul II had to face much tougher attacks.

Following the publication of the “Ratzinger Report,” the book-length interview of the then Prefect of the Congregation for the Doctrine of the Faith, a strong reaction arose in 1989, in the midst of a discussion of the appointment of the new Archbishop of Cologne, which was not welcomed by German theologians. The latter wrote a sort of open letter co-signed by 162 German speaking theologians. The letter eventually spread to The Netherlands, where it garnered another 17,000 signatories. The letter was welcomed by more than 100 Catholic groups, and there were similar reactions in Belgium, France, Spain, Italy, Brazil and the USA.

The letter should be read in its entirety, since many of the issues it raised are still current.

It describes the Second Vatican Council as a “radical and irreversible” turn in the “understanding of the ecclesial faith.” It says that the deposit of faith “has not an absolute value,” but gains value because of its “pastoral connotation” that makes possible “the faithful interpretation of truth within the historical existence of community.” The letter also described the Holy See as conditioned by a “mentality of privilege,” while it should make room for an “idea of the Church as a communion of Churches.” The letter also asked for a rethinking of the function of the Magisterium.

These issues are still current, and many of them are even suggested in some parts of Pope Francis’s apostolic exhortation Evangelii Gaudium, especially in the parts on the autonomy of the local Church. A push for a major autonomy among local Churches can be also noted in the letter that Pope Francis sent to Cardinal Robert Sarah, Prefect for the Congregation of the Divine Worship, on the correct interpretation of the motu proprio “Magnum Principium,” that gave more freedom in liturgical translations to the bishops’ conferences.

The issues of the Cologne letter were even reiterated by Italian theologians in the so-called “Document of the Sixty Three”, dated May 15, 1989. That document was born out of the “discomfort experienced by some over the attitude of the Church’s central authority in the teaching, disciplinary and institutional fields,” and of the “impression that the Catholic Church is “teeming with regressive impulses.”

These forms of dissent gave birth to the movement “We are Church”. The Holy See reacted with several documents: Donum Veritatis in 1990, a document authored by Cardinal Ratzinger on the ecclesial vocation of the theologian; Veritatis Splendor in 1993, an encyclical of St. John Paul II on the primacy of truth; and above all the revision of the Profession of Faith with the document Ad Tuendam Fidem (1998), which contains the formal exposition of the concept of “definitive truth.”

Pope Benedict XVI was also subject to criticisms, but – incredible but true – these criticisms came not only from liberals, but also from the traditionalist sector. Veteran Vatican watcher Sandro Magister recounted the traditionalists’ criticisms of Benedict in an article dated April 8, 2011. He noted that Benedict’s announcement that he was going to Assisi to celebrate one day of “reflection, dialogue and prayer” to commemorate the 25th anniversary of the first meeting at Assisi created a certain turmoil in the traditionalist sector – so much that a public appeal against Benedict’s decision was signed. Traditionalist criticisms of Pope Benedict – Magister noted – had “grown in intensity,” thereby reflecting “a growing disappointment toward the restorative expectations of the pontificate,” since the Pope limited “his criticisms to the post-conciliar degeneration in the Church, and did not address his criticisms to the Second Vatican Council as a whole.

These are just a series of examples demonstrating show how there have always been criticisms and even rebellions against the reigning pope, and how sometimes they have also been seen as violent.

What is striking is how the criticisms of Pope Francis are now exacerbated, to the point that they are even sometimes described as a plot to delegitimize the Pope.

It is true that in the past there have been harsh debates, and many complained about St. John Paul II’s decision making. And every pontificate carried on a spoils system, during which people closer to the reigning pope’s thought took over positions of power, while others where marginalized.

However, the debate these days has become poisoned. So poisoned that the Pope thought he had to respond directly to one Cardinal in a letter, even asking him to send his letter to websites that had described the actual situation in other terms. And this was not the first time that Pope Francis hammered his critics. It also happened during the Synod, after a letter signed by 13 cardinals expressing deep concerns about the Synod’s procedures was delivered to the Pope.

In general, any criticism of this Pope is interpreted as an act of treason. It has happened in many cases, and almost exclusively in regard to Amoris Laetitia, Pope Francis’ post-synodal exhortation that still generates debate. Cardinal Gerhard Ludwig Mueller, Prefect Emeritus of the Congregation for the Doctrine of the Faith, underscored once more that there is one only way to read Amoris Laetitia, and it is through the lens of tradition. Professors José Granados and Joseph Kampowski, did the same in a book titled “Amoris Laetitia. Guidelines.”

These kinds of interpretations are suffocated by a narrative that attempts to mark a discontinuity even bigger than what the Pope himself has claimed, while the media carry on an agenda that sometimes seems to be pursued behind Pope Francis’s back.

How much the Pope is aware of this agenda, is yet to be seen. In the book “LatinoAmérica” – a book length interview that the Pope granted to the Argentinian journalist Hernan Reyes Alcalde – one can find many of the topics of the 1990s Catholic dissidents, and some of them are taken up by the Pope.

But the Pope looks at those topics from a Latin American point of view, with the secret need to give a new dignity to a theology that he considers too subjected to Western theology. Certainly, this Latin American push for more space and weight made room for the liberal agenda to take the stage again. But liberals are now acting in an almost fierce way, even while their reactions seem to be respectful. This is one of the outcomes of the terrorism of gossip that the Pope always asks us to watch out for.