Pope Francis: Looking for a Reform Scenario Pope Francis to the United Nations: Which Diplomacy?

Is the Jubilee of Mercy the Real Face of Pope Francis’ Revolution? 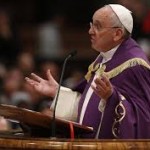 Pope Francis celebrated the second anniversary of the pontificate his way, by convoking an Extraordinary Jubilee for Mercy to begin December 8, 2015 and to end November 20, 2016. This decision shows how much Pope Francis is focused on the theme of mercy. The Holy See Press Office release reminded us that the word “mercy” occurs 31 times in the Apostolic Exhortation “Evangelii Gaudium.” In the end, Pope Francis wants to be remembered as the “Pope of Mercy”. This choice mirrors his pontificate, and may give us a new lens for understanding it.

After two years Pope Francis’ papacy definitely cannot be considered as a revolution. The doctrinal changes so much hoped for by some leftist factions will not take place. If read with care, Evangelii Gaudium – Pope Francis’ Magna Carta, as he admitted – reveals that he is not aiming at doctrinal revolutions, but at leaving the Church with a new, more pastoral approach. The Pope wants to show that the Church is close to everyone, even to those at the margins. But behind his choices there would be no governing vision. Instead, there is a pastoral vision, the vision of a parish priest. Debates over a possible strategy of governing should be left to others. As they have been.

These debates were fomented by those who tried to push their agenda behind Pope Francis’ back. The Pope listens attentively to everyone, because he knows that a good part of his success comes from the good relations that bind him to his grand electors. These electors come from the Curia old guard, more than from the team that Benedict XVI fostered. Even those who were top officials under Pope Benedict, and who are now pushing their own agenda behind Pope Francis, built their careers during the last years of St. John Paul II’s pontificate, thanks to their ties with the heads of the then Secretariat of State, or with other centers of power.

Two years later, the clerical gang war that led to the Vatileaks season, alas, has not ended. Pope Francis has drawn from every bit of his Latin American charm for the sake of reviving the Church’s image. The Pope admitted that he did not have a program for governing. But his pastoral approach was well defined: it was forged in Peronist Argentina where form is substance; in the “Theology of People” that was the non-Marxist, Argentinian version of liberation theology; and in his coming from the end of the world and always feeling drawn to people, more than to a central body of government.

Thanks to these characteristics, the Bergoglio phenomenon arose. During the two years of his pontificate, Pope Francis has often been over interpreted. Choices that he deemed normal, pastoral and popular were interpreted as acts of governing and signs of contradiction. This mostly happened when the Pope spoke off the cuff. Francis is often imprecise, and his words are easily taken out of context and used against the Church. The most obvious example is the way his words about the Roman Curia are always reported. Nourished by a typical Latin American contempt for structures, the Pope spoke of the Curia as the “last European court” in his lates interview,  and his words facilitate the efforts of those who want a weak Church, one deprived of structures and unable to speak the truth to the world. It was even alleged that Pope Francis had claimed that “the Curia is leprosy,” but this was later denied. However, the Pope speaks in ways one hears in bars or on the streets. Nevertheless, after the first moment of indignation, one needs to discern what he really means.

In fact, Pope Francis himself also has had to discern. The past two years may be described as a two-speed papacy: the revolutionary age and the age of the change of pace. The revolutionary age coincided with the design for big reforms; the hiring of expensive, external consultants to improve finances, structures, even communication; and the establishment of an ad hoc Council of Cardinals in order to reform the Roman Curia.
The era of the change of pace was instead characterized by giving more trust to consultants from within the Vatican, and by the – invisible but important – reinforcement of the “hidden Vatican” that works tirelessly to reform, without dismantling structures. Therein lies the conversion of hearts Pope Francis speaks so much about.

Two years after his election, Pope Francis has established a sort of parallel Curia that will step-by-step replace the current bodies. The creation of two super-congregations (Charity, Justice and Peace; Laity, Family and Life) has been widely discussed. These two congregations would embody at least six already existing pontifical councils. The feeling is that the new congregations will be announced, only later to be filled with personnel and given structures and regulations. Something like this is what happened with the Congregation for the Doctrine of the Faith’s Commission on Delicta Graviora. And even more so in the case of the Secretariat for the Economy.

Even the huge overhaul of the Vatican economy is becoming a reform in slow time, in order to maintain the precision that characterized the path of reforms during Benedict XVI’s pontificate. One might ask whether it was worthwhile to establish an ad hoc Secretariat, or whether it would have been better simply to appoint Cardinal George Pell as Prefect of the Prefecture for Economic Affairs with enhanced oversight powers. This latter move may have avoided the blood-letting that recently came out through a series of leaks – something that seems to be in fashion again.

By calling a Jubilee for Mercy, Pope Francis showed where his primary interest lies: a pastoral interest, more than one in governing. “Evangelii Gaudium” reveals a Pope that does not want to speak as an expert about anything, but who speaks on each topic with the concern of a shepherd. He also runs the risk of being imprecise, but he does so in line with his primary goal of bringing the Church close to people. For Pope Francis, there are no theological nuances designed for peculiar situations. There is instead the need to take a stand, and especially to take a stand on behalf of those he deems to be the poorest.

After Pope Francis’ election, the idea of a Third Vatican Council was widely discussed in order to complete the Second Vatican Council and to bring the Church into a new season. Pope Francis responded with a new synod season, during which much discussion takes place, but few decisions are reached. But he also responded by calling this Jubilee of Mercy, thus giving new life to the Pontifical Council for the Promotion of the New Evangelization that he had previously sidelined a bit.

All this demonstrates that the real issue is talking abut God. Paradoxically, this issue is still alive despite Pope Francis’ missionary push. This question is so crucial that it will be the topic of discussion during the next meeting of the Ratzinger Schuelerkreis, the circle of Benedict XVI’s former students. In the end, Benedict XVI indicated clearly that the “polar star” guiding the Church is Jesus, as the three books he wrote on Jesus of Nazareth demonstrate.

Two years after Pope Francis’ election, the same fundamental problems that developed and that were addressed during Benedict XVI’s pontificate remain today. Pope Francis took over those topics, he asked for recommendations, he listened to everyone and made his decisions, but without a precise governing program. We would be proven wrong if we tried to give Pope Francis’ choices a deeper meaning. Many of his decisions are influenced by his advisers, and often the Pope seems to be quite fascinated by the ideas coming from the progressive wing. This does not mean we have a progressive Pope; quite the opposite.

Perhaps Pope Francis called the Jubilee in order to deliver this message: be merciful, confess your sins, pray. This is how the conversion of hearts is achieved, and not through the (secular and non secular) agendas that attempt to give this pontificate a direction other than Francis’ own.

8 Responses to Is the Jubilee of Mercy the Real Face of Pope Francis’ Revolution?