Media vs. the Church: from Cardinal Barbarin to Cardinal Pell 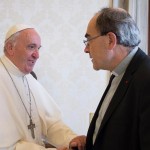 None of the most important media outlets have covered the news that the investigation on Cardinal Philippe Barbarin, who allegedly cover up priestly abuse on minors, was definitely archived.  The charges against the Archbishop of Lyon were unsubstantiated.

When the allegations were made public, media outlets strongly attacked the Cardinal, while the then French Prime Minister Manuel Valls asked him to “assume all responsibilities: I do not expect words, but actions”. The media also spread the rumor of a certain embarrassment within the French bishops’ conference.

That media campaign has no more reason to exist. The Lyon Public Prosecutor issued Dec. 11 a decision to archive the case. The Archdiocese of Lyon was informed of that last week. The decision stressed that the investigation “did not find any criminal offense.”

The allegation was infamous. A release by the Archdiocese recounted that Cardinal Barbarin was accused of “not having denounced a sexual aggression and not having assisted a person in danger, with respect to the accused Fr. Jerome Billioud, in 1990 and 1993.”

According to the Lyon public prosecutor there was “no violation”, because the complainant was 17 and then 20 years old when the events took place, and because Cardinal Barbarin advised him to file a complaint, which he actually did.

The first question is: “Who will return Cardinal Barbarin his honor and reputation?” He is not the first Church member to be under the spotlight for false accusations. He will not be the last. The media feeds itself with exaggerations and innuendos. In Cardinal Barbarin’s case, as in many other cases, his presumption of innocence was never upheld. But a complaint does not mean that a person is guilty or an accomplice to a crime.

The second question to raise is: why has the decision to archive the case been met with total media silence?

Cardinal Barbarin’s story is the archetype of many other cases of alleged pedophilia scandals within the Church.

However, for a long time the Church has been working to fix these mistakes. It is a strenuous struggle, that one piece of data explains better than any other: between 2011 and 2012, Benedict XVI laicized about 400 priests.

However, just as the sins and mistakes of priests and ecclesiastical hierarchies must be acknowledged, so it must also be acknowledged that in many cases the accusations led to nowhere because they lacked merit.

The allegations had often been brought forward with the ultimate goal of gaining huge compensations, under the auspices of unscrupulous lawyers, and even by associations of survivors that have also been sometimes criticized by their own members.

During the 2010 annus horribilis, when the cases of clergy sex abuse came out at an impressive pace, even Benedict XVI’s brother was put under the spotlight. Who remembers this? And who remembers that witch hunt climate, that led any weak allegation to be turned into a certainty of guilt?

This is the reason why Cardinal Barbarin is the archetype of all those priests unjustly sentenced by the media, rather than in a trial. Unfortunately, the story also reveals the inability of the Church to defend its own members. Campaigns against the Church are really ferocious.

If nothing has been said of Cardinal Barbarin, way too much has been written about Cardinal Pell, who went to Australia to defend himself at the trial that charges him for yet-to-be-specified sexual crimes.

When he announced he was taking a leave of absence from hist post as Prefect of the Secretariat for the Economy, Cardinal Pell described the attacks against him as a “relentless character assassination”. There had been voices in Australia that showed perplexity over the way the allegations against him were raised.

Angela Shanahan, in a piece published on the June 10 The Australian issue, underscored that “Pell can never receive a fair trial. The vibe has taken over.” And she added that “that vibe was created by the avalanche of media stories and commentary clouded by sheer speculation going back to the cardinal’s last appearance before the Royal Commission into Institutional Responses to Child Sex Abuse, none of which is relevant to a criminal charge of sexual abuse.”

It is even more shocking that Pell was subjected to similar allegations in 2002. He reacted the same way: the then archbishop of Sydney took a leave of absence to clear his name. The allegation was that he abused an 11 year-old altar boy when he was in Melbourne. The report, signed by justice Alec Southwell, stated that the allegations were “unsubstantiated”, and in addition shed light on the lack of reliability of the complainant.

The Southwell report was released after four months of “media ambush,” as the Catholic World Report described it.

Commenting on the case, David Quinn, editor of the Irish Catholic, stressed that  “if, or rather when, Archbishop Pell emerges from this terrible ordeal, the Australian Church may have to reconsider how better to protect its priests against false accusations. It seems a better balance needs to be found between the rights of the priests and the rights of their accusers.”

The question is still pending, and can be applied to all the cases of alleged sex abuses of the Church. Even the Pontifical Commission for the Protection of Minors is called to respond to this question.

Born to coordinate the response to abuses through the creation of guidelines for the bishops’ conferences, the Commission lost in the course of the years the membership of the two survivors called to give their contribution, Peter Saunders and Mary Collins. The latter strongly criticized the Congregation for the Doctrine of the Faith, accusing it of an attitude that somehow prevented changes.

It must be recalled that the the Congregation for the Doctrine of the Faith has strongly tackled the issue, since Benedict XVI’s times. Again, 400 priests were defrocked. It must also be noted that a balance is needed between the rights of the accusers and the rights of the priests.

A balance that is hard to establish, and that it will be even harder to attain if the proposal to set up a special tribunal for “negligent bishops” in case of abuses would be implemented. In the end, how can negligence be defined? Justice needs certainty that a crime has been committed, even if the allegations of the crime are horrible.

Looking to the wider scenario, there is the impression that a new attack on the Church is going to be prepared. Through scandals, the attack will try to force the Church to stop standing up on hot issues, or at least to diminish the moral authority of the Holy See.

To achieve this goal, cases of alleged pedophilia or alleged cover up of pedophilia are the easiest route.

Right after he was appointed Prefect of the Congregation for the Doctrine of the Faith, Archbishop Ladaria was accused of having covered up abuses addressed in a proceeding instructed by the same Congregation in 2008.

This was the signal that a new era of scandals could come.

It is also for this reason that it is rumored that Charles J. Scicluna, the current archbishop of Valletta, Malta, who served as the Congregation of the Doctrine of the Faith Promotor of Justice, could be appointed new secretary of the CDF. Archbishop Scicluna addressed and promoted the new course against pedophilia back in the beginning of the 2000s, under St. John Paul II and Benedict XVI. His return to Rome is however unlikely.

But, even if he would return, his reputation would not be enough to save the Church from suspicion and the media machine.

The data of the 400 priests laicized was provided by the Holy See during the meeting with the Committee of the UN Convention on the Rights of Child. The meeting is held with all the countries that have ratified the convention, and it is a dialogue with independent experts to monitor how the convention is implemented in the States.

The UN Committee gave a harsh report, directly attacking the Holy See for having covered up abuses, to the point of requesting changes to parts of Canon Law and abolishing confession, with tunes that sounded like a moral suasion to have the Church not stand for some fundamental rights. It was a subtle invitation to keep quiet.

Turning back to the 2002 Pell Case, Catholic World Report also looked back to the origins of the article that broke the news on the investigation of the then archbishop.

“One of the recipients of the article – Catholic World News reported – was the Eros Foundation, a Canberra-based lobby group for the sex industry,” whose spokesman, John Davey “was also a member of the Rainbow Sash organization, which campaigns for a change in Church teaching on homosexual acts, and had been refused Communion by Archbishop Pell at St. Patrick’s Cathedral in Melbourne.”

For what concerns the Cardinal Barbarin case, there was that media anxiety to condemn an exposed Cardinal, while the government was going through a crisis.

True, one case of abuse on minors within the Church is one case too many. But there is a question that is worth making: why was Cardinal Barbarin’s case effective dismissal ignored? Why haven’t so many innocent priests cases been treated fairly in the media?

Since these questions are left unanswered, a doubt stays that perhaps, yes, there is really a prejudice against the Church, or even an actual campaign that attempts to deprive her of her moral authority.