Pope Francis strengthens the Vatican, in Pope Benedict’s spirit. Liberation Theology and Rome, was it truly a war?

Outsourcing in the Vatican 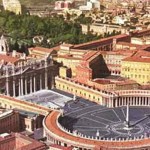 Pope Francis’ last move is the appointment of a pontifical commission to look at the organization of the economic-administrative structure of the Holy See. In essence, it is an external team of auditors who will advise how to streamline the expenses and activities of the 37 semi-autonomous offices which make up Vatican City State. The commission is comprised of eight members. Interestingly, only one comes from the ranks of the Holy See.

With a similar commission (although an internal one), Pope Francis sent the message that he wanted clarity in the activities of the so-called Vatican bank, the Institute for Religious Works (IOR).

For an eventual reform of the Curia, Pope Francis more pragmatically named a group of eight cardinals, including Cardinal Oscar Andrés Maradiaga as their coordinator. The terms of reference for this group have not yet been defined in an official document. It is expected that Pope Francis will soon do so, making the group an official entity of the Church.

It is typical of the Jesuits to form external commissions to confront and resolve problems. Pope Francis has embraced this approach, common in the management of Jesuit provinces, and he is applying it to his pontificate.

Bergoglio’s goals are enormous. He wants to change the way the entire Roman Curia thinks and behaves. A Curia rightly or wrongly perceived by many as out of touch with the people. Pope Francis’ way of proceeding reveals distrust for the Curia.

Pope Francis meets, reportedly quite often, with Benedict XVI. He also phones the dicasteries very frequently, speaking with employees at all levels and asking them about their work.  Some of the employees have also been invited to pay him a visit in the Domus Sanctae Marthae.

Pope Francis has taken the reins of the situation, or he’s trying to. It is an exhausting approach, that which he is taking.

The most recent obstacle he has faced was the appointment of the prelate of the IOR, i.e. the Holy See representative who works as a link between the cardinals’ oversight commission and the board of laymen. Pope Francis decided that Battista Ricca should take that job. Bergoglio knows Ricca very well, they often had lunch together.

Ricca was a career diplomat who – after having served in several nunciatures – was sent back to Rome. There, he gained the reputation of “incorruptible” in his managing of the accounts of the nunciatures. He was also appointed director of three residences for prelates. One, the residence in Via della Scrofa in Rome, was where then-cardinal Jorge Mario Bergoglio usually stayed during his trips to Roma. Another residence managed by Ricca, the Domus Sanctae Marthae, is now the Papal residence.

So Ricca was very close to the Pope, and this is how he earned the Pope’s confidence. But when the Pope chose Ricca as prelate, no one brought up to him the dossier that explained why, earlier in Ricca’s career, it had been so important to bring him back to Rome. A dossier that the Italian vaticanista Sandro Magister made reference to, and which contained accusations of homosexual behavior.

«Who wants to boycott Pope Francis?» This was the question raised after the publication of Ricca’s story. The Vatican’s problem is not whether specific reports and information are true or not. It is more important to understand who “leaked” the dossier outside the Sacred Walls. With an outgoing, «lame duck» Secretary of State and the appointment of his successor on stand by, it seems as if attacks on anyone’s reputation are fair game. It is a chaotic situation inside the Vatican.

This proves that the Curia’s poisonous environments did not dissipate with Pope Francis’ arrival.

Benedict XVI started a plan bring order to the expenses and the activities of the pontifical administration. It was necessary to streamline the structures, as often there were unnecessary overlaps and redundancy of responsibilities.

First of all, Benedict XVI reformed the Prefecture for the Economic Affairs of the Holy See, the Vatican «ministry of economy».  Benedict’s reform made the Prefecture look like a modern ministry of finance, with the power to control and project expenses. This way, Benedict XVI worked towards making the Vatican a modern State, and at the same time to strengthen its structures.

In fact, external consultants are not new. Every Vatican dicastery appoints consultants, i.e. experts called to serve the Holy See in some specific field.  However, not until now had consultants been so clearly a part of an outsourcing strategy.

Pope Francis does not favor appointing “ad hoc” consultants for specific issues.   Instead, he prefers to address some problems by presenting them to experts outside the Vatican. An approach that has been accepted in Vatican City State, to the detriment of the Holy See.

The Vatican administration must pay salaries and keep its finances in the black. In order to meet its obligations, Vatican City State has accepted donations. Including very large donations. Donations, however, invite outsiders’ intromission, since the donors may attempt to exert control over everything. They are ultimately buying the Vatican, one piece at a time.

The Knights of Columbus, for example, have been making generous donations to the Administration of the Patrimony of the Apostolic See (APSA). These donations have served to pay the salary of one of the top consultants at the Vatican, for the past two years. Obviously, before hiring the job holder, the Knights of Columbus were consulted.

Even in the financial area, a lot has been traditionally outsourced. Since the Calvi and Marcinkus era, many things have changed. The IOR is now controlled by a “board of laymen,” the council of superintendency. Ettore Gotti Tedeschi was once named president of this council. But Tedeschi was not a Vatican man. He treated the Vatican more like a multinational company than a sovereign state with funds at the Pope’s disposal. Tedeschi eventually received a no confidence vote from the board he presided.

How was his successor chosen? The IOR’s Superintendency Council decided to contract the services of a specialized agency, a “head hunter”. It was an external agency, which was well paid for its services. The agency identified Ernst von Freyberg for the position. Von Freyberg then hired his own, external, spokesperson, enabling him to manage relations with the press.

In a similar vein, Von Freyberg tasked an American company (the Promontory Financial Group) with auditing the IOR. Nothing wrong or unusual: auditors must be external. What is interesting is that later Antonio Montaresi was appointed the IOR’s chief risk officer. He comes from ranks of the Promontory Financial group. No questions Montaresi’s professional credentials. The issue is, had there been a possible conflict of interest?

In the meantime, Grupo Santander – Gotti Tedeschi had been for years the president of its Italian branch – proudly and loudly announced its re-arrival to the Vatican in the role of consultant to the Prefecture for the Economic Affairs of the Holy See.

Pope Francis wants a poor Church, and always maintains that «structures are important, but up to a certain point.» The problem is that, up until now, Francis is increasing Vatican bodies, and thus expenses. Furthermore, the advisory commission for financial activities can also call on outside experts itself, and will have its needs well covered.

This is how outsourcing in the Vatican is growing. And while the Vatican hires outside experts, inside the Sacred Walls there continues to be potentially disloyal butlers, and priests under the influence of the gay lobby. Will Francis truly succeed in cleaning up the Church? Or will the way he is proceeding favor the formation of new interest groups?