Pope Francis, four issues on the table for the future of the Church Pope Francis, between informality and a Latin American Perspective

Pope Francis, a consistory with view to the next conclave 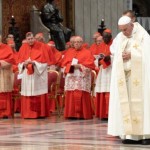 There is a twofold meaning to the Nov. 28 consistory Pope Francis announced Sunday, with which he will set the basis for a conclave with a substantial majority of cardinals he himself has created, and by which he will give a definitive shape to the reform of mindset he has always pursued.

Once again, Pope Francis has offered a few surprises with his choice of men to get the red hat, but that is not the main key to interpreting his choices this – his seventh consistory – or any other time around. This time as in the past, the pope’s choices are a way to remedy the past. Through consistories, the Pope speaks to what has already happened. He confronts unsettled issues and says – directly or indirectly — what he thinks about them.

The first key is numerical.

Pope Francis will expand the number of voting cardinals to 128, since Cardinal Donald Wuerl will turn 80 on Nov. 12. That’s eight more than the limit of 120 set by Paul VI and confirmed by John Paul II. The cardinals eligible to vote might have been 129 if the disgraced cardinal Becciu still had his prerogatives.  They will be 127 since February 2021, when Cardinal Wako, one of the few remaining voting Cardinals created by St. John Paul II, will turn 80, too.

The expansion of the voting membership is a precise expression of Pope Francis’s will. It was widely thought the Pope was going to reform the regulations for conclaves. He did not do so by law. He did it by just doing it, as he did with all the other reforms. There is no legal-institutional basis, but merely a (legitimate) papal  decision.

When it comes to commenting on the Pope’s picks for new red hats, it is often said that the Pope likes to surprise instead of choosing standard cardinalatial sees. It can be the right way of seeing things if we consider that nowadays Milan, Venice, or Paris would sit in a conclave. At the same time, there would be the Archbishop of Siena, Paolo Lojudice, formerly one of the auxiliary bishops of the diocese of Rome.

However, this criterion does not always work. Pope Francis did not wait too long, for example, to give the red hat to Archbishop Celestino Aos of Santiago de Chile, who will become a cardinal at the next consistory. The Nov. 28 list also includes archbishop Wilton Gregory of Washington, DC.

Pope Francis’s main criterion appears rather to be personal trust or the rationale he wants to pursue. For example, Pope Francis will create Archbishop Mario Grech, the Synod of Bishops’ new general secretary. The General Secretariat is supposed to be central in the Curia reform. At least, it was the initial idea that was then set aside in favor of a renewed centralization of the Secretariat of State.

At the moment, the Secretariat of State seems marginalized again. It will lose its financial autonomy and is no longer represented on the IOR Cardinals Commission it used to lead. After back and forth, we are now back to the initial phase of the discussion on reform of the Roman Curia.

Pope Francis will also create Marcello Semeraro, the former secretary of the C8 C9 C6 C7 Council of Cardinal Advisers, who recently succeeded the disgraced Cardinal Angelo Becciu as Prefect of the Congregation for the Cause of Saints.

In the end, the Pope has no problem with giving the red hat to curial officials. He does with those he trusts more, or those with a role he wants to emphasize. He did the same during the 2019 consistory when he created Fr Michael Czerny SJ, who is an undersecretary (for the Migrants and Refugees section) of the Dicastery for Integral Human Development.

The upcoming consistory also puts a big dent in the notion that Pope Francis prefers to look outside of Italy. The Pope always picks the new red hats under a criterion of representativity, as if the conclave might be a sort of universal poll of the Church in the choice of the new guy.

This is a way of interpreting some of the surprises picks of the past and today.

Among the new cardinals, there is Archbishop Antoine Kambanda of Kigali, the first Rwandan cardinal of the History, but also archbishop Jose Fuerte Advincula of Capiz (Philippines) and bishop Cornelius Sim, Apostolic Vicar of Brunei. The pick of bishop Sim also shows that the Pope always wants to create a cardinal from a place where Catholicism is a minority or even persecuted.

However, the upcoming consistory will have a consistent group of Italian cardinals: there are six of them among the new red hats, and three of them are beyond 80, so not eligible to vote in a conclave. Each of the picks has a particular meaning, especially among those not eligible to vote.

Silvano Maria Tomasi, Scalabrinian Father who served for 12 years as Holy See Observer to the international organizations in Geneva, is among the new red hats. According to some rumors, he will be appointed the new delegate to the Order of Malta to replace cardinal Becciu. Tomasi also led the commission on the Order of Malta’s controversies that led to the Pope-pushed resignation of the Grand Master Matthew Festing back in 2017.

Msgr. Enrico Feroci has been for nine years director of Caritas Rome. The red hat to him is an award to a priest on the front line, but it can have another meaning. Some observers note – with some malice and some realism at once – that the pick of Msgr. Feroci is also a slap in the face to Cardinal Camillo Ruini,

When he was Rome’s Vicar General, Cardinal Ruini never backed Msgr. Feroci as a possible bishop (indeed he still is not). Ruini is now 89, but still has much sway in  Italian cultural discussion. In an Oct. 6 interview, he underscored that the Italian Church is in decline and noted that criticizing Pope Francis does not mean being against him. In a poisonous climate like that of today, these words did not pass unnoticed.

Among others, these two choices might lead to describing Pope Francis pontificate as a “remedial pontificate,” since many of his favorites are seemingly a way to underscore what the Pope did not like in the past.

There are many examples of this. In 2015, the Pope created Karl-Jozef Rauber, the nuncio who strongly opposed the appointment of André Joseph Léonard as Aarchbishop of Brussels – even granting an interview that read like anti-Benedict XVI propaganda. It is rumored that he was one of those who leaked to the media a series of innuendos concerning Benedict’s pontificate.

In 2014, Pope Francis created Archbishop Gualtiero Bassetti of Perugia, then vice-president of the Italian bishops conference (CEI), thus making the top ranks of the CEI imbalanced. The then-president was Cardinal Angelo Bagnasco, whose idea of the Church was different from Pope Francis, focused on the Eucharist and faith before any dialogue with the secular world. Cardinal Bassetti then replaced cardinal Bagnasco at the helm of the Italian Bishops Conference.

Another example: in the Oct. 5, 2019 consistory, Pope Francis created a cardinal Archbishop Michael Louis Fitzgerald. In 2006, he was president of the Pontifical Council for Interreligious Dialogue. He expected to be made a cardinal, and he was instead sent nuncio to Egypt. According to Sandro Magister, he used to be too open in establishing a dialogue with some Muslim institutions.

In the 2019 consistory, Pope Francis also created José Tolentino Mendonça, Prefect of the Apostolic Library. That, in itself was not exactly a surprise appointment, while it came by surprise that Pope Francis never created cardinal the former prefect, Jean Louis Brugues, who retired last year.

Pope Francis, however, had some hard feeling toward the librarian Brugues, when he was Secretary of the Congregation for Catholic Education, opposed the appointment of Victor Fernandez as a rector of the Catholic University of Buenos Aires. Cardinal Bergoglio instead backed the nomination of Fernandez, who is now widely held to be one of Pope Francis’ ghost-writers. Fernandez is a go-to interview when it comes to interpreting Pope Francis’s thought. He was first appointed archbishop as rector of the Catholic University — one of Pope Francis’s first decisions — and then sent by Pope Francis to lead the critical diocese of La Plata in Argentina.

Which are the “remedial” decisions of this upcoming consistory, then? One of them is Archbishop Gregory, who was called to lead the archdiocese of Washington, DC. The Pope, step by step, is changing the new US profile: he picks esteemed bridge-builders instead of culture warriors.

The Pope is then turning upside down John Paul II’s rationale, who, in 27 years, worked on operating a shift in the US episcopate. With Pope Francis, we are seemingly back to the trend of the 1980s.

Another “remedial” pick is that of Archbishop Paolo Lojudice of Siena. As an auxiliary bishop of Rome, he ran to become the Pope’s vicar. Pope Francis chose Cardinal de Donatis instead. Cardinal de Donatis will have his former auxiliary bishop in the college of cardinals together with him. The pick of Lojudice seems to be a sort of counterbalance to de Donatis, who was garnering some consensus in the college of cardinals and will now have a similar counterpart.

Pope Francis’ intention to leave a tangible legacy seems clear. Hence, the decision to give the red hat to Fr. Mauro Gambetti, the Custodian of the Sacred Convent of Assisi. This is to underscore Pope Francis’s view that the Franciscan idea must be central in the future Church.

That Pope Francis wants to leave his imprint on the Church is further shown by the fact that in seven different consistories – one per year since 2014 – Pope Francis created 101 cardinals, 79 of them eligible to vote in a conclave when they were made.

The profiles tell the kind of face Pope Francis wants to design for the Church: in dialogue with the world, a Church of peripheries that burns bridges with the experience that in Pope Francis’s view failed. It is a change of mentality, not just a mere geographical shift.

The geographic distribution of cardinals has changed, but not that much. With this consistory, there will be 48 Italian cardinals, 22 eligible to vote in a conclave, and 26 not.

In the end, everything seems to be set for the next conclave. It might come before any comprehensive Curia reform is actually implemented.

4 Responses to Pope Francis, a consistory with view to the next conclave