What does the story of the Vatican decoration to Mrs. Ploumen teach us Pope Francis, four criteria for an unfolding cultural revolution

Pope Francis, a crossroads and a dilemma 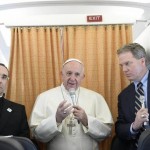 Pope Francis in-flight presser in the way back from Peru could be considered a sort of a watershed for his pontificate. The Pope’s declarations on sensitive issues like that of sex abuse by clergy shed light on one of the biggest difficulties of Popes Francis: combining mercy with justice.

The situation Pope Francis reacted to was objectively complicated. Pope Francis had appointed Bishop Juan Barros to Osorno in Chile. But Bishop Barros was one of the members of a group that gathered around Fr. Fernando Karadima, a charismatic priest guilty of multiple sex abuses in Chile. Karadima was found guilty and was isolated, and Bishop Barros, and the other three bishops who had been raised in the group, accepted the Congregation for the Doctrine of the Faith’s ruling and distanced themselves from the actions of Fr. Karadima.

However, those abused saw in Bishop Barros’ appointment to Osorno, where the cases of abuse took place, a sort of moral slap in the face. Protests and discussion are in place since Dec. 2014, and members of the Pontifical Commission for the Protection of Minors also had lunch with the Pope to discuss the issue and shed light on the discrepancy between his words of firm condemnation of abuses, and his actions.

In a letter, Pope Francis had suggested Bishop Barros to resign. The Pope himself rejected his resignation letter, because a resignation could be considered equal to an admission of culpability. Stung by questions from Chilean journalists, he said that there was no proof of Bishop Barros’ culpability.

Obviously, some of the questions in the inflight presser dealt with the issue. Pope Francis explained in depth what he said. He clarified what he means by calumny, he underscored that in the case of Bishop Barros there is no (material) evidence – thus making a distinction between (material) evidence and the word ‘proof’ he previously used, which he admitted might be hardly acceptable to victims.

The Pope also said he appreciated Cardinal Sean O’Malley’s statement criticizing the Pope’s phrasing, and reiterated the ‘zero tolerance’ line on cases of sex abuse by clergy, noting that he was never going to grant a pardon and explaining the reason why he had signed a decision in favor of a priest that was under investigation. He also added that there will be no appeals if proof of abuse is clear.

These statements show Pope Francis’ dilemma. This dilemma is at the basis of his pontificate, and was brilliantly analyzed sometime ago by Stanisalw Gryiegel, one of St. John Paul II closest friends.

The dilemma is that of choosing between Christ and Moses, between the merciful truth or the casuistry for the hardened of heart. Grygiel’s applied this rationale to the debate following the publication of Amoris Laetitia, implying this questions: is what Jesus said still valid – that Moses conceded to the repudiation of a man’s wife because Israel’s heart was hardened, but that there is a truth that went beyond the hardened hearts?

This rationale can be applied to the sex abuse by clergy issue, as Pope Francis presented it. Pope Francis’ statements go from condemnation to the total need to guarantee justice. Is it possible to be protective of the rights of the accused and tough on abuses at the same time?

Here is an apparent paradox: the Pope in fact applies the casuistry for the hardened of heart when he underscores that no pardon and no appeal will be granted. The Pope repeated this commitment in a Sep. 21, 2017 meeting with members of the Pontifical Commission for the Protection of Minors, speaking off script. His speech was heard even by journalists, although it was not included among the official Pope Francis’ speeches, and the Holy See Press Office delivered the prepared intervention instead, that was not as strong. Now, the Pope has reiterated those words in an in-flight presser conference, so there is no possibility to take them out of the official transcripts.

Zero tolerance to counter clergy sex abuse should be applied. On the other hand, a rigid application of the law is conceding something to the hardened of heart. That is, leaving something to the rationale of a necessary punishment, even if accusations are not true.

Pope Francis knows that. In Bishop Barros’ case, he put into practice the principle of the merciful truth. That is, a punishment is applied when there are clear pieces of evidence, and not before. And, in case there is no clear evidence, things should go on as usual, with many apologies to those who feel wounded, but also with some firmness.

This is how Pope Francis explained the decision to reject Bishop Barros’ resignation, although he had at the beginning suggested to him to resign. In the end, Bishop Barros is not even charged with anything, which makes superfluous the juridical language the Pope used in the inflight presser.

How can Pope Francis reconcile these two different approaches?

To be honest, Pope Francis is not the first Pope called to reconcile justice with the pressure of the world, the need to provide a clean and transparent image of the Church with decisions that do not go against people as long as they are not guilty of something.

Going back in time, there are different cases and similar solutions. Benedict XVI withdrew the appointments of Bishop Gerhard Wagner to Linz and of bishop Stanislaw Wielgus to Plock, respectively in order to help the ecclesial unity and to overcome accusations of espionage against the prelate.

There is no Pope who has done more than Benedict XVI to counter pedophilia. In doing that, he applied Christ’s principle, that is, seeking truth through justice. He operated as a man of the Church, rather than as a man of government.

This is the reason why the hardened of heart did not understand Benedict XVI’s approach. Let’s take the approach he took with the Church of Ireland: is there anything less casuistry than that?

Benedict XVI convoked twice the Irish bishops to Rome, to discuss reports that showed their failure to live up to their responsibilities. However, he did not remove anyone. He put the Church of Ireland in Penance, and asked for forgiveness in a letter sent to the Catholics of Ireland, that was very personal and very in-depth in analysis. Then, he worked to make each of the bishops aware of his own responsibilities. Seven out of 13 bishops resigned. They did so out of awareness, not for opportunity.

Pope Francis applied a similar approach with Bishop Franz-Peter Tebartz von Elst: after the financial scandal that shocked his diocese of Muenster, he was moved to Rome, to the Pontifical Council for the Promotion of the New Evangelization. The bishop had spent a lot in the renovation of the Bishop’s house, but everything had been made according to the rules, using diocese’s funds. Despite that, the bishop was moved to Rome, in order to avoid the unavoidable breach with the faithful.

There is one pending case. That of the diocese of Ahiara, in Nigeria: Benedict XVI appointed to it Archbishop Okpaleke in 2012, but the priests rejected the new bishop for ethnic reasons. Pope Francis was handed over the case, and used a different approach: he appointed Cardinal Onayekan as Apostolic administrator in 2013, and in June 2017 he met with a delegation from the diocese and asked that all the priests send a letter to declare their full obedience to the Pope and to any bishop the Pope will appoint.

These are just some examples, that show differences in approaches, but also the fact that the Church goes on despite the media. When the media tried to influence the 2013 conclave, a release from the Vatican Secretariat of State attacked the media behavior and labeled it as similar to that of the big nations when they had the power of veto in a conclave.

Is Pope Francis’ pontificate subjected to media pressure? Undoubtedly so, as were all the other pontificates. The presentation of Pope Francis’ double approach in the flight from Lima to Rome represented the failure of a model of communication tailored around Pope Francis, with the aim of being juicy for the secular press with slogans and catchphrases, and of selling the Pope’s image in the most positive way.

Until now, Pope Francis had a huge impact on secular media, that neglected to report his more traditional thoughts in themes like marriage, family, abortion and gender ideology. Pope Francis grabs the headlines of secular media with his gestures, especially with simple gestures like carrying his own bag to the plane or personally going to buy new glasses. This particular focus of the secular press also reveals an intention to “spoliate” the Church of a superior dignity and embrace the notion of a “human, too human” Church.

Secular and progressive media then emphasize Pope Francis’ criticism of the Curia, his calls for churches to be open to welcome immigrants, and so on. The fact that he is a decision maker and a centralizer is never mentioned. Presenting the image of a Pope opposed to the Church is good to the secular media, and it is even better when the Church must be attacked, because of prejudice and bad faith. And how is the Church usually attacked? On sex and money, as usual.

This is how we get to the sex abuse by clergy scandal. The theme is very sensitive in the US, where people lived in first person the issues of abuse – so much so that anytime someone tries to uphold some legal protections for a – sometimes unjustly – investigated priest, that person is attacked.

There are many who have committed abuse, but there are even more that have been victims of media campaigns, and that, even when completely exonerated, cannot go back to their prior positions.

The narrative of this pontificate hit the hopes of the hardened of hearts. The establishment of the Pontifical Commission for the Protection of Minors, that at first included some survivors among its members, bore the hope that the Pope was going to strongly tackle the issue of pedophilia.

It is not that the Pope has not done so. He did. This, however, does not mean going against justice, nor to sidestep Vatican and Canon Law tribunals.

Hence, the disappointment of the survivors, that thought they were part of a sort of Vatican watchdog, which in fact could barely be included in a specific juridical framework. Even the idea of a special tribunal for negligent bishops was difficult to implement: there is already a tribunal, that of the Congregation for the Doctrine of the Faith, and negligence is hard to establish. When can a bishop be considered negligent? When, instead, is the bishop considered unable to act because he lacks full information?

All of these issues were caught up in expectations, difficult to meet.

To sum it up, the secular and Catholic progressive worlds will not be content with a mere request for forgiveness if the Church does not change her policies. And Pope Francis will hardly do that, because he knows that, for the sake of the many good priests that are carrying forward their mission, the Church cannot surrender to the spirit of the world.

This is why Pope Francis’ words en route to Rome from Lima are going to mark a break in the pontificate. At its fifth year, all the decisions of government are now Pope Francis’, and not inherited. Pope Francis is going to have against him all those who, in the name of a so-called Church Spring that sounds like the progressive propaganda of the times of the Second Vatican Council, back a certain notion of reform. This idea, most likely, is not fully Pope Francis’ idea.