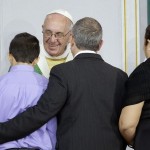 In choosing Greg Burke and Paloma Garcia Ovejero, respectively, as Director and Deputy Director of the Holy See Press Office, Pope Francis confirmed his preference for a less clericalized Church. For the first time, two laypeople are at the helm of the Holy See Press Office, even though – it must be said – the real “czar” of Vatican communications is Msgr. Dario Edoardo Viganò, Prefect of the Secretariat for Communications, a priest. What signs can we discern from the model of Church that Pope Francis is proposing?

First of all, he made a choice of field. He wants everyone to be co-responsible for the choices and life of the Church. In his view, this is not a Church of priests, but a Church in which everyone has the same dignity – laymen and priests, men and women. In a word, a Church of the people.

For this reason, Pope Francis took some visible steps to make this rationale concrete. For instance, he established the Council for the Economy, which replaced the Council of 15 cardinals in managing the Holy See’s economy. The Council of the Economy is composed of 15 members, but while eight of them are cardinals, and the other seven are laymen. When they met for the first time, the Vatican press release emphasized that laymen and priests sat alternately in the Council – one priest and one layman – so that it was visible that they worked together and not in separate groups.

The discussions regarding curial reform also dealt a great deal with the possibility that laypeople could become heads of Vatican dicasteries. The statute of the new dicastery “Family, Laity and Life” clearly stresses that the secretary of the dicastery does not have to be a cleric, while it does not provide any information about the prefect of the dicastery. So, while it is granted that the Number 1 in the dicastery will be a cleric, there is no indication of his rank. Should he be a cardinal, an archbishop, or simply a priest?

Finally, for the first time, three laypeople have been chosen among the members of a Vatican dicastery. This happened in the Secretariat of the Economy which recently announced its membership. This is news. “Pastor Bonus” – the Apostolic Constitution which regulates roles and functions of the Roman Curia – clearly states that members of Vatican dicasteries must be priests. This provision is not there to last.

Are these reforms going to overturn the notion of a clerical Church?

We should look at the bigger picture. Debate pivots on the issue of quotas, that is, there is a quota of laypeople which needs to be included in the control room in order to make the Church really inclusive. Only with an increased presence of laypeople within decision-making ranks – it is said – will the Church eventually lose its clerical mentality.

Yet, it must be acknowledged that a good portion of the officials within the curial ranks are laypeople, charged with several and different responsibilities. True, the Number 1 and Number 2 of each dicastery are always ranked at least as archbishop, but the Vatican is nevertheless a lay world to a large extent that must not be underestimated. Likewise, the weight of consultors, in many cases laypeople of proven experience and ability, often even coming from outside the Catholic environment, must not be underestimated.

The truth is that the Holy See has always been a land of opportunity for laypeople. It is enough to page through the “Annuario Pontificio”, the Vatican’s annual “Who’s Who” book, to become aware that many laypeople are present among papal employees. In the end, the real issue is not the influence of laypeople in the Curia. The real issue is the quality of the work done.

As far as reforms are concerned, discussions are conducted at two different levels.

The first level deals with the general vision behind the reform. The Roman Curia is in fact the body on which lies the head, that is, the Vicar of Christ, the Pope. The new shape of the Curia requires a theological foundation that afterwards must be structured in accord with canon law. Vatican dicasteries consist of Congregations and Pontifical Councils, and the choice was made to weight differently the work done by each (Congregations make decision; Pontifical Councils make suggestions), while keeping this work within a unique framework.

The fact that dicasteries are presided over by cardinals and archbishops underscores their intimate communion with the Pope, since they are part of the college of bishops. Everyone is co-responsible for any single decision, thanks to a common vocation sealed by the grace of the sacrament (Holy Orders).

This particular, sacramental communion is lost when laypeople take over the helm of Vatican dicasteries. In this case, there can be collegiality at the level of decisions, but there cannot be the collegiality of bishops. Thus, de facto, the work of the Curia is considered on a par with that of any governmental ministry and, in this context and to this extent, the Curia must be understood according to secular criteria. This is one of the biggest limits that the ongoing Vatican reforms have to face.

The second level of discussion concerns the dicasteries’ effectiveness. During the pre-conclave meetings that led to Pope Francis’s election, the issue of effectiveness was strongly pushed. The pre-conclave meetings followed the emotional wave of the first Vatileaks trial, and so the cardinals who took part in them asked for a reform that could show the world that the Church was transparent, professional and adapted to the world. Said concisely, a more efficient Holy See was needed in order for it to be credible to the world. That meant a Holy See able to accept recommendations from the outside, to shed some powers and to delegate others, to go beyond its ranks. At first, Pope Francis’s reforms followed this path.

Yet, a Council of Cardinals, two pontifical commissions of reference concerning both the IOR and Vatican management, a commission and then a committee for communications, and widespread (and very expensive) Vatican outsourcing were not enough to move this reform forward. Despite all of this, a second Vatileaks trial has taken place, confidential information was still leaked, and attacks against the Holy See have persisted.

This proves that the core issue is not represented in a more lay and efficient Church, but rather in a Church more aware of its divine mandate – a Church free from secular pressure to be able to believe in God, as both Pope Benedict XVI and Pope Francis have sought.

These are the knots of Pope Francis’s reforms, though they remain largely shielded from view. Instead the Church is discussed along the lines of secular criteria. Declericalization is not intended as a change of mentality, but as the mere introduction of a new quota for laypeople in the Vatican ranks. The Church’s management is not considered part of the Church’s mission, but rather as a pragmatic task. Theological discussion is minimized to being for or against Pope Francis, although the Church has always been enriched by wide open discussions as seen in the theological debates that led up to the Second Vatican Council.

Now more than ever the Church is tempted by the spirit of the world. Since the Second Vatican Council, mass media have tried ever more to penetrate the Church’s internal debates and to influence them, by attempting to move the Church toward new criteria without regard for the Church’s own criteria.

This is how the opposing concepts of the “Media Council” and the “Real Council” were born at the Second Vatican Council – Pope Benedict XVI talked about this during his very last meeting with the Roman clergy. This is how the debate prior to Blessed Paul VI’s encyclical “Humanae Vitae” was managed – it endured unprecedented media pressure along with anticipation that undermined its impact and generated the disillusionment later termed the “Humane Vitae effect.”

From the media, these pressures and debates moved to other places. In the diplomatic field, at first public opinion was pushed to view the Holy See as an NGO and not a State (remember the See Change campaign?). Then, the Holy See was strongly urged to join the United Nations as a Member State and not merely as an Observer, in order to attempt to exploit the Holy See as a third-party supporter of certain resolutions of the Security Council. Finally, non-binding reports like the  Convention for the Rights of Child’s report were used as a hammer to push the Church to change its doctrine. (The report, which referenced clerical sexual abuse of minors, labeled sacramental confession “a culture of silence,” and advised that some parts of canon law be changed).

Will the Church’s problems be solved by a Church that is willing to adopt secular language as its own, or to seek a greater impact at international congresses by assuming a less clerical demeanor?

Certainly not. In the end, the media frenzy following reports about an alleged cover-up of abuses by Archbishop Carlo Maria Viganò, when he was nuncio to the United States, points to a different conclusion – it is not a declericalized Church that is needed, but rather a moral reform of the clergy.

Pope Francis tackled the issue by reforming the profile of new bishops, with some shocking picks including the unexpected promotion of priests with the “smell of the sheep” who never thought about an episcopal career. Trying to combat careerism, the Pope also promoted to the rank of cardinal those archbishops of dioceses that had never been regarded as a cardinal’s see, as if he wanted to underscore there are no “first class” and “second class” dioceses.

Perhaps, this is Pope Francis’s line. However, his line can be understood with difficulty, as it goes ahead and breaks down. And yes, a big reform would be needed. But the reform should start in the seminary and from there it should then flow outward through the clerical ranks.

Pope Benedict XVI started his pontificate by reforming the norms for admission to seminaries. It was the beginning of his end, as the new norms aimed to break up fortified chains, links and coteries. One of the most shocking of the new criteria was the complete rejection of any candidate to the seminary who had embraced or supported the gay culture even moderately. Not by chance, in the soon-to-be-published book-interview he did with Peter Seewald, Benedict XVI says that he believes he dismantled the gay lobby in the Vatican.

What remains is the terror of the gossipers, to which Pope Francis always refer. And while the notion of a declericalized Church is a good catchphrase for all, it will hardly fix all the problems.