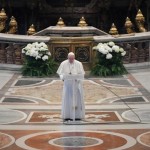 The news of the acquittal of Cardinal George Pell from sex abuse accusations came in the week that precedes Easter. After 400 days in prison, Cardinal Pell will finally be able to celebrate Mass and enjoy his freedom.

However, Cardinal Pell’s acquittal cannot be considered a victory. Cardinal Pell lost all of his reputation. He spent 400 days in prison, and nobody will ever restore to him those days. He was under scrutiny in the Vatican, where he also has to face a canon law trial. When there is a civil guilty verdict, the Congregation for the Doctrine of the Faith also initiates canon law proceedings. What happens when the civil verdict is overturned?

Cardinal Pell’s acquittal cannot even be considered a victory for the Church. The Holy See prudently managed the case, and always stated its full confidence in Australian authorities. It was necessary to state this. Truth be told, even Pope Francis behaved correctly. Cardinal Pell left his positions in the Vatican because he was beyond retirement age, or because his term expired, and not because of the prior guilty verdict now overturned. The Holy See always tried to keep separated the personal situation of the Cardinal from his institutional profile.

Despite all of this, there is the impression that the Church is unable to defend herself from the narrative built against her. The reactions to Cardinal Pell’s acquittal were lukewarm, and those that followed the confirmation of the guilty verdict on appeal were weak. Every declaration on the abuse issue must be accompanied by some phrase that reiterates the Church’s commitment to listen to the victims and the shame of the Church for the cases of abuse.

The same happened with Cardinal Philippe Barbarin, archbishop of Lyon. Cardinal Barbarin was acquitted of abuse cover-up accusations. Right after the acquittal, Cardinal Barbarin resigned. Pope Francis at first did not accept his resignation, but the Cardinal insisted and it was granted.

In the end, Cardinal Barbarin refused to be on the media pillory, nor could he accept there had been doubts about his conduct.

Cardinals Pell and Barbarin are just two top-ranking examples, part of a galaxy of similar situations.

On March 19, Pope Francis appointed bishop Patrick Michael O’Regan as the new archbishop of Adelaide, in Australia. The see had been vacant for a year and a half. On July 30, 2018, archbishop Philip Wilson resigned after he was found guilty of abuse cover-up. He was the highest-ranking Vatican official to be convicted of concealment. After he spent four months in prison, Archbishop Wilson was acquitted because there were “reasonable doubts” about him having committed the crime. This news received almost no media coverage.

The Church that celebrated Easter in the times of the coronavirus is a Church under siege. The churches emptied by an invisible enemy that does not allow the public celebration of the sacraments happens to be a good indicator of her situation.

The Holy See has recently been everything but strong in institutional relations. For what concerns the coronavirus, the Holy See respected the indications of the local governments. It was, however, striking that the Holy See did not request a mention to freedom of worship in the provisions. It is worth remembering that freedom of worship is not about the possibility of a priest celebrating Mass, as he can do so privately. It is about the fact that celebrations can be held in public, and people can freely take part in them. Freedom of worship is a right that is also to be enjoyed collectively, and it is part of the religious freedom, the “right of all rights”.

The approach on Cardinals Pell’s and Barbarin’s cases go along with the approach on the coronavirus emergency. Both situations give an indication on the lack of institutional thinking.

It is paradoxical, given the situation. The bishops have never been as close to the people as they are now, they have never been so visible. Masses are continuously broadcast via social networks. Yet, the real presence and the sense of Eucharist is missing. There is no possibility of overcoming it online.

Pope Francis himself tried to be more present. During the last three weeks, he granted four interviews; he wanted his morning Mass broadcast live every day, he tries to spread a message of hope.

However, the presence of the Church as an institution is lacking. Everyone – bishops and priests – seems to act alone, with no coordination. We cannot find a united and strong message.

True, it is not anymore the time of a triumphant Church. It is undoubtedly a more yielding Church, and not only when yielding is needed. The Church has seemingly nothing else to say and somehow has adapted to the language of the world.

It seems a strongly-worded, harsh analysis. Then, I think that Joseph Ratzinger already foresaw this situation in a series of radio interventions for Christmas in 1969. In those interventions, Ratzinger said that the Church was going to lose some of the structures that she had in times of prosperity. The Church, out of the crisis, he said, was going to become a small Church with fewer faithful and fewer social privileges. A Church, in the end, almost at the mercy of the world. That is the destiny of a worldly Church that believed more in the effectiveness of her structures than in the faith.

But Ratzinger knew that, sooner or later, the world would have set the gaze on that small group of people that still believed. The Church would have then risen, more spiritual, more alive than before. In this moment of crisis, with our churches empty, this is a real message of Resurrection. Happy Easter!

One Response to Pope Francis, a different Easter