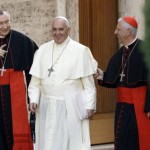 The address Pope Francis delivered to the ambassadors accredited to the Holy See has perhaps marked his definitive change of pace. The speech was characterized by a strong diplomatic approach, and provided a sort of agenda. As observers noted, this agenda, which the Pope made available to every government, entails a stronger role for the Secretariat of State.

This detail must not be under-estimated. Step by step the Vatican Secretariat of State has regained the position of guidance and coordination in the Curia which it was seemingly going to lose under Pope Francis. The change is undoubtedly due to the merits of Cardinal Pietro Parolin, the Secretary of State, who comes from a diplomatic background, but who also shows a certain instinct for simple pastoral actions.

During this last year papal letters to Cardinal Parolin as well as papal rescripts solicited by the Cardinal after audiences with the Pope multiplied. These documents are quickly drafted and immediately put into effect; they are the quickest tools for carrying out reforms.

Scrolling through these documents, we can see that among other matters, they strengthened the Secretariat of State’s control over Bambino Gesù Hospital, the pediatric hospital owned by the Holy See, and established a commission to oversee the health facilities owned by religious communities; they reaffirmed the status quo of curial offices while the reforms are still ongoing; they stressed that the Secretariat of State should keep control of the information publicized by the Holy See Press Office until the transition of competences to the Secretariat for Communications is completed.

These “maneuvers” filled some legislative gaps generated by Pope Francis’ reforms. For example, neither the Secretariat for the Economy, the Council for the Economy, nor the Secretariat for Communications are still included in “Pastor Bonus”, the apostolic constitution that still regulates the functions and competences of curial dicasteries. “Pastor Bonus” will remain the canonical text of reference until a new apostolic constitution is issued.

In addition to these activities of governing, it is noteworthy that the Secretariat of State exercises even more diplomatic influence than before. Cardinal Parolin’s diplomacy is that represented by the great era of Vatican diplomats. Formed under Cardinal Agostino Casaroli, the current Secretary of State refined his diplomatic skills as deputy “Foreign Affairs Minister” of the Holy See under the administration of Cardinal Angelo Sodano. This “diplomatic school” is strong in dialogue and mediation. But it also distinguishes pastoral from diplomatic initiatives.

This was not Benedict XVI’s mode of operating. The Pope Emeritus had changed the diplomatic approach and grounded it in the notion of truth. This transition can be seen not only in the theme of his first message for the World Day of Peace (“In truth, peace”), but also in the diplomatic interventions of Cardinal Tarcisio Bertone, his Secretary of State.

A sample of Benedict XVI’s thinking is given in the homily he preached at the Mass for the ordination of five new bishops. Among these new bishops was the now-Cardinal Parolin, then newly-appointed nuncio to Venezuela. The Mass took place on September 12, 2009. Benedict XVI underscored that “the first cardinal virtue of the priest as minister of Jesus Christ consists in letting himself be molded by the truth that Christ shows us. In this way we become truly reasonable people, who judge on the basis of the whole and not on chance details. Let us not allow ourselves to be guided by what we see through the small window of our personal astuteness, but, rather, let us look at the world and at human beings through the large window that Christ has opened to us on the whole truth and thus recognize what truly counts in life.”

This kind of approach was constantly criticized by the Vatican gang of diplomats, especially when, after the Regensburg Lecture, Benedict XVI was targeted in the crossfires between Catholics who had not understood the revolutionary impact of truth in fostering diplomacy and the most sensitive Muslims. Both parties were disappointed. After the Regensburg Lecture, there arose from the Islamic world the impulse that brought about a solid Christian-Islamic dialogue, which is still ongoing.

Once elected, Pope Francis met on March 22, 2013 with the diplomatic corps accredited to the Holy See. Cardinal Tarcisio Bertone was still Secretary of State, and the Pope’s speech contains a revealing detail. The speech was typically Pope Francis’, mostly a pastoral speech, but one sentence links Pope Francis with Benedict XVI’s diplomatic position. “Francis of Assisi,” Pope Francis said, “tells us we should work to build peace. But there is no true peace without truth! There cannot be true peace if everyone is his own criterion, if everyone can always claim exclusively his own rights, without at the same time caring for the good of others, of everyone, on the basis of the nature that unites every human being on this earth.”

Then Cardinal Bertone was replaced by Cardinal Parolin. Parolin is a professional diplomat. Working patiently, he created around Pope Francis precisely the institutional character that Francis seemingly wanted to get rid of.

Pope Francis’ first New Year’s address to diplomats in 2014 was full of input from the Secretariat of State. But the initial part, which broadly discussed divided families, the role of elderly in society and the World Youth Day in Rio, was certainly an indicator of the Pope’s pastoral approach. The 2015 speech became even more diplomatic in tone, and included wide range analyses of the geopolitical state of the world. In the end, this latest speech was probably Francis’ first “tout court” diplomatic speech, and represented a sort of “homework assignment” for the ambassadors accredited to the Holy See.

However, the speech also presents a clear list of priorities. The top priority is that of migration. One of the to-be-established super-dicasteries is now labeled as “Justice, Peace and Migration”, and not “Charity, Justice and Peace,” as previously planned.

Certainly, facing up to migration issues has become the first of the papal diplomatic aims. The rationale behind this choice is the theory that assisting migrants might avoid the export and epidemic of violence and terrorism, and that bringing more mercy within the migration and human trafficking is considered the perfect solution to human trafficking (Pope Francis insisted on this as his core diplomatic activity in the beginning of the speech).

In the end Pope Francis is apparently undergoing a transformation. He remains the “Archbishop of Buenos Aires” when he takes part in ecumenical meetings, addresses popular movements, or when he speaks off the cuff and off script based on his reading of people’s moods. But he is Pope when it comes to decisions.

Pope Francis loves to make decisions himself. But he also did not know the Curia earlier on, and so he did not trust the men of the Curia. This is the reason he surrounded himself with counsellors from outside the Curia. The period of Vatican “outsourcing” was an outcome of this papal apprehension, as was the establishment of the Council of Cardinals.

Nowadays, Pope Francis trusts some people in the Curia more than before. He now understands the existence of the so-called “hidden Vatican,” that works for the love and for the sake of the Holy See, and he has come to appreciate highly its efforts. The Pope has also become aware of the need to be in continuity with his predecessor, and so he deconstructed the narrative about his pontificate as a rupture with the past.

Pope Francis also made some slight changes in his public appearances, as if he has now understood that he needs to be seen as Pope. So, he uses the fisherman’s ring (one of the papal dignities) when he takes part in certain pontifical celebrations or official events, while he still wears his ring as Archbishop in general audiences and less official meetings. One main change is that he wore the stole during the last Christmas “Urbi et Orbi” blessing from the balcony of St. Peter’s Basilica. It was the first time. He did not wear the mozzeta, but the stole was a step forward toward an improved institutionalization (after the election, he did not wear either the stole or the mozzetta).

These signals perhaps reveal that with time Pope Francis has become more aware of his role. Another signal is that the Pope has already reviewed three times the draft of the post-synodal exhortation, and that he is still correcting it. The exhortation should be published in March, perhaps March 19.

Based on the final text, we will be able to assess whether the Pope has taken a strong stance (which would lead to a sort of “Humanae Vitae” effect for the synod), or whether he has reaffirmed the truth, but watered it down with some kind of pastoral practice, or whether he made of the document a “fetus abortivus” (in one Cardinal’s words), that is, a straightforward short document that will not change that much in doctrine and will not get too much involved in open discussions.

No one can foresee the future, but at the moment the Pope is apparently changing his way of governing. He seems to rely ever more on the Secretariat of State, which won over his trust and regained its earlier prominent position. Probably, the Pope still has some surprises set aside for less official moments, especially during international trips. For example, in Bolivia he received a crucifix sculpted as a hammer and sickle, the Marxist emblem, but also the emblem of the “Orden de Espinal”, created by the Bolivian parliament in memory of Fr. Luís Espinal, S.J. Fr. Espinal was a socially committed priest – and liberation theology hero – who was assassinated in Bolivia. During his trip to South America, Pope Francis paid homage to the priest at the place where he was assassinated. During the trip to Mexico, Pope Francis will perhaps pay homage to others who were compromised by their attraction to liberation theology.

This is an aspect of his lack of concern for the institutional character of the papacy, but also part of his strong link with Latin American issues. But, even though polemics will surround certain improvised gestures of the Pope, papal diplomacy will close ranks and strictly separate the diplomatic and pastoral aspects of the visit. In the end, the papacy is double-faceted: there is the institutional aspect, which the Secretary of State personifies, and the non-institutional part, which Pope Francis plays.