What can Pope Francis learn from Eastern Churches? Pope Francis, the moment of transition 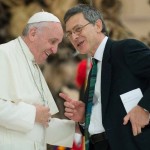 The appointments of Matteo Bruni as director of the Holy See Press Office, and those of Alessandro Gisotti and Sergio Centofanti as deputy editorial directors of the Vatican Dicastery for Communications, show how the Vatican communication is evolving.

In Pastor Bonus, the apostolic constitution that regulated until now functions and tasks of the Curia offices, the Holy See Press Office was directly linked to the Secretariat of State. The information for the daily bulletins, guidance on which news to deliver, the news management guidelines, all came from the Secretariat of State. The director of the Press Office was called to shape this information and communicate it.

The Holy See Press Office was not, then, just a press office. It also worked as an office of communication, and the mediator between the “palace” and the media.

The Holy See Press Office role was part of a more comprehensive design: the Holy See had a series of media, all independent, that was entrusted with providing a broader scenario of news seen from the Church’s point of view.

L’Osservatore Romano, the newspaper of the Holy See, was born, in the end, to defend the Holy See from what Pius IX called “an assault on the truth” – that is, the manipulation of history that went along with the Savoy Kingdom attempts to annex the Pontifical State.

Vatican Radio was founded by the inventor of the radio, Guglielmo Marconi, and was designed as a tool to spread the Pope’s and Holy See vision to the world.

Both tools were crucial during fascism in Italy and during the Second World War. The Holy See was able to provide a lucid and real vision of the war thanks to the Osservatore Romano, that could bypass the Italian official bulletins. Pius XII launched via radio his messages of peace that still shed light on the challenges of the time.

Paradoxically, the Second Vatican Council changed everything. The media jumped into the discussion of the Council and tried to address and direct some decisions of the Council’s fathers. Paul VI understood the danger. He decided to move the Press Office outside the Vatican Walls, he put further filters to communication, while leaving the radio and the newspaper free to express themselves.

After the Second Vatican Council, the new impact of social communication led to an office that later became a Pontifical Council, that is a sort of ministry in the Curia. The radio began to broadcast from Palazzo Pio, outside of the Vatican Walls, while its historic buildings were left within the Vatican walls.

Thus, the Vatican media were still linked somewhat to the small territory of the State, a village that gave flesh to the Holy See’s soul.

The decision to connect the Holy See Press Office with the Vatican Secretariat of State was born out of this rationale. The new Dicastery for Communications has changed everything, for several reasons.

The Vatican Dicastery for Communications will be then the one that will manage information, while the Secretariat of State – from where bulletins and official information come – loses weight on communication. Something is lost on the journalistic side; something is gain on the institutional communication side.

Emblematic of this change is the decision to move all Vatican media outside of the territory of Vatican City State. Starting next year, the offices of the Vatican radio, television and newspaper will be in Palazzo Pio, at Vatican Radio headquarters. Only the administration will be left within the Vatican walls.

There is almost a sense that this means a transition toward a more professional and institutional communication, although one less linked to the Holy See. To set the gaze farther, one can read in it Pope Francis’ desire to privilege peripheries over the center. L’Osservatore Romano and the Italian edition of Vatican News are giving more space to news coming from the Church in the peripheries. Pope Francis’ messages at events or celebrations are released by the local Churches or by Vatican media, but they do not appear in the official bulletins of the Holy See Press Office.

The Vatican media departments balance this movement by elevating the profile of Latin – there is now a weekly broadcast in Latin – to show the history of the Holy See and its particularity.

This is likely a new model of communication for the Holy See, which also comes from the need to rationalize the media department. This model, however, does not show that the Holy See is only now opening up to the world: it has always done that. Instead, it shows the abandonment of the Vatican perspective. This perspective had many reasons to exist. Now, it risks being neglected.