Pope Francis, a non-European to the conquest of Europe 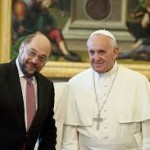 They seem to be two different things, not linked. Yet, there is a threat which links the ongoing discussions about the Synodal path on the family and what takes place in European institutions. Many are the issues that touch on the family and at the same time on the matter of religion in Europe. Starting with gender ideology, which agenda, with the recent approval of Lunacek report, has become the European Union agenda. These are the issues Pope Francis should speak about during his next trip to Europe.

Schulz feels a strong connection to the Pope with regards to poverty and the peripheries, and he hopes that Francis will speak precisely about these issues. In Schulz’s view, Pope Francis should talk toEuropean institutions about the need to welcome immigrants, and even to recall his visit to the small Italian Island of Lampedusa, the first trip of his pontificate. And Schulz – as well as radical secularists– is ok with the fact that the papal trip does not even include a pastoral meeting with the Catholic members of the European Parliament: this kind of program paves the way to reinforcing the notion that the Pope is a just a head of state, like any other.

Yet, Pope Francis may surprise everyone. The issues at stake are very important, and they deal not with European identity. They mostly deal with the human being, the way he is envisioned. They deal with the God’s project of creation.

This is where European issues and the Synod on the family follow the same path. Speaking about the family means speaking of God’s project of creation. It means addressing the complementarity between men and women, of their opening to life, of the way this opening to life becomes the fundamental fabric to build a just society. From Gospel to family to social commitment: this path cannot be broken.

But there have been attempts to break this path. At the Synod, African Bishops strongly denounced that in their countries, which are in need of financial aid, this aid is entwined with the requests for changes in the legislation. These changes are meant to introduce the ideology of gender, to break away from the idea of the natural family. In practice, if an African country needs a new irrigation system, itis obliged to introduce gay marriage in its legislation. Or to pass a law to consent to in- vitro fertilization. Or to any other law of the so-called Reproductive Health Rights, an euphemism used at the United Nations to promote the notion that abortion is a “right”.

It is not just an African problem. In 2012, the Report on the Social Doctrine of the Church in the World issued by the Van Thuan Observatory pointed out that the new colonization did not deal with the conquer and exploitation of States, but rather with that of the human being. The report also stressed that laws that potentially destroyed family and countered natural law have been used as a leverage to clear the way for a cultural colonization. Curiously, the country chosen as a case study was Pope Francis’ beloved Argentina.

Pope Francis proved to be very concsious of the issue. On November 15, meeting the Italian Association of Catholic Doctors, stigmatized abortion and euthanasia and stressed that “playing with life is a sin against God creator.”

Pope Francis may then be particularly conscious of the risks posed by a rootless Europe. Risks that must be faced in a Europe where religious freedom vacillates, as underscored by the most recent World Report on Religious Freedom issued by the Pontifical Foundation Aid for the Church in Need.

The most striking data of the report is that there are many European countries were the degree of lack of religious freedom is considered “of concern”, among these the highly civilized United Kingdom, Germany, France and the Netherlands. Scrolling the report, one finds out that in these very countries a Christian may be discriminated against on account of positions taken regarding family – from the choice of a Catholic school to the French protest against the institutionalization of gay marriage – and that Churches are attacked by radical secularists because they dare speak about these topics.

When he presented the report in Rome, Martin Kugler, a member of the Observatory on Intolerance and Discrimination against Christians in Europe, provided a gloomy picture of the situation, and underscored that «menaces to religious freedom are above all supported by groups of radical feminists, homosexual lobbies and radical laicists.»

Radical feminists – Kugler explained – think that non-restrictive laws on abortion and contraception, without any possibility of objection of conscience, are needed to pursue a real equality between man and woman; homosexuals want to show that homosexuality is absolutely normal, and aim to silence Christians and Muslims about their positionson homosexuality; radical secularists aim at excluding the religious point of view from public life, since in their view religious groups should not take any public stances.

This is intolerance masked as freedom, with a conception of progress that puts aside every notion of natural law. The basis for this masked intolerance are not new. They can be traced back to the change in the United Nations vocabulary, which the Holy See has denounced increasingly. The international organizations speak about Right to Reproductive Health, right to a dignified death, the right to choose a dignified life. All of these words hide one sole word – and notion: eugenics.

Eugenics is a word nobody wants to mention, since it brings to mind Adolf Hitler’s aberrations. However, eugenics is practiced every time a life is not considered dignified enough to be lived.

It is worth noting an interview that Carl Djerassi, the father of the abortifacient pill, recently granted to the British newspaper “The Telegraph”. In it, Djerassi clearly disclosed the pill’s endgame: that sex would become just a recreational activity. So much so that, starting in 2050, sperm and embryos would be routinely frozen in order to be used for in-vitro fertilization whenever it is considered convenient.

The recently beatified Paul VI, in drafting the encyclical Humanae Vitae, was keenly aware of the menace of designs which render the human person merely a sort of mechanical robot, with no sentiments, unable to give love a sense.

Such designs, it now seems, are becoming a reality in a rootless and 2012 Nobel Laureate for Peace Europe Union. Meeting European Bishops, Pope Francis has said he had not understood the reason why Europe did not include a mention to its Christian roots in the European Constitution. Those roots were not just an aspect of its identity. They signifiedcare for the human person – just think about the network of hospitals – that has now, it seems, disappeared.

But this is just part of the narrative. Always in 2011, the Strasbourg European Court of Human Rights labeled as “not coherent” the Italian law on the in-vitro fertilization, which forbade the pre-implant diagnosis of embryos.

On the one hand, a judgment that defended the embryo. On the other, a judgment that would open the doors to eugenics. Two cases that reveal how the rootless Europe has become mostly an unlimited bureaucracy. A concept of the human personis lacking at the core, as are values shared in common. Ideas and ideologies are carried forward through the so-called ‘soft law’, since whenever an appeal reaches the European Court, the final judgment becomes part of the common jurisprudence for all of Europe.

When Pope Francis speaks about the prevalence of a «throw-away culture», he has in mind the way that society treats the poor and other marginalized people – anyone who is discarded by society. But he is also probably referring to those discarded by transhumanism in the world. This is the European risk, now. This is the reason why a discussion about the family, the beauty of the natural family formed by man and woman and open to procreation, not only mirrors God’s design on men: It can serve as the greatest antidote to the human being without humanity that bureaucracies and international institutions want to impose.

2 Responses to Pope Francis, a non-European to the conquest of Europe