Pope Francis: A Red Line between the US Trip and the Synod 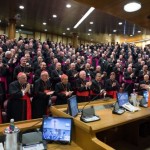 The Pope’s most awaited speeches in the US are those he will deliver at the United Nations and at a joint-session of the US Congress, the only two speeches out of 26 in which he is likely not to improvise. He did not improvise when he spoke out last November 25 on behalf of social justice and the family to the Council of Europe and to the European Parliament. He will not improvise before Congress. He will speak in English, a language that he does not have down pat. Nor will he improvise at the United Nations, though he will speak in Spanish, his mother tongue.

It is noteworthy that Congress invited him to speak before both houses in a joint session despite the fact that Congress had not sent him the traditional congratulatory message upon his election. It is even more noteworthy that US public opinion over the Church has changed with Pope Francis, who is more appreciated for what he is said to have said than for what he really ever says.

This is how Pope Francis has become the pop star and icon of a certain leftist press that highlights a Pope open to homosexuals in the Church, whose agenda of mercy is really on target, whose efforts for social justice are justly praised because they are focused on sociological problems and backed up by real scientific data, and not on the issues of life and religious freedom that don’t sit well with the Left. These latter issues were not just at the core of the US arena, but also at the core of a global debate that up till now the Church has led – suffice to think about the work of the Holy See at the Cairo and Beijing UN Conferences (respectively in 1994 and 1995).

When Pope Francis speaks about life and family issues, when he condemns abortion – as he also does in the encyclical “Laudato Si” – public opinion remains silent. In fact, the secular world wants to use the Pope as a totem to promote a cultural revolution that will eventually overshadow the Church. This is the reason the Church is said by the leftist press to have finally found its real dimension, whereas before it was out of date. The secular world’s rationale is that the Pope – and by extension the Church – must be close to the poor, must reach out to the “existential peripheries,” and might even be useful for carrying out some diplomatic operations that require a third party and an authoritative diplomatic umbrella. But at the same time – the secular world thinks – the Church must remain outside of the international arena.

One of the reasons for the US congressional invitation to Pope Francis is the hope – not so hidden – that a South American Pope, more concentrated on the Church’s social impact than on the Church’s cultural impact – could ratify this capitulation of Church to society in front of politicians.

However, this trip is not only about politics. There is a whole world inside the Church that is particularly interested in the outcomes of the Pope’s speeches to the United Nations and the US Congress. This world is led by the German Bishops who are the most committed to carrying forward the so-called “agenda of mercy”. They theorize that if the Church does not take the current social situation sufficiently into consideration, it will continue to hemorrhage more of the faithful. Instead – they maintain – the Church’s thinking must adapt itself to social situations and heal wounds, rather than provide an ideal to be pursued.

This is one of the outcomes of what Pope Francis calls the “field hospital” Church. The Pope, however, speaks about first-aid, to be applied in what are often desperate situations. As often happens with popes in relation to their native lands, Pope Francis’ perspective has been that of Latin America. There, the Christian world is deeply divided; Catholics are losing ground and Protestant sects are prevailing. The crisis of faith in Latin America is occuring because the Catholic Church’s structures are considered to be more or less “social agencies,” and not a place where one looks for faith. This is the reason Pope Francis always insists that the Church is not “a merciful NGO,” and why he appreciates so much popular piety as the only genuine faith he can experience.

After being cared for in the field hospital, people must be moved to structures that provide a permanent healing. It is not just a matter of sewing up an open wound. Instead, the wound has to be healed and a correct therapy has to be applied so that the same wounds will not occur again. The upcoming Synod on the Family is looking for this kind of therapy. This is its goal, and not – as it is widely stated – the consolation given both by access to sacramental Communion for the divorced and civilly remarried, and by extending moral acceptance and even a liturgical blessing to same-sex couples.

Pope Francis also has this first goal correctly in mind, though the way he will bring it about is yet to be made clear. In fact, the real issue that needs to be explored is to understand how he is given advice and by whom?

In the upcoming Synod of Bishops the rules have been changed, with the result that the Synod is shaped far less like a communion of bishops. The conclusions of this Synod will be communicated in the Pope’s final address, and not in a final message by the Synod or by a post-synodal apostolic exhortation. Neither of these documents will be issued. A commission charged with writing the message has not been indicated in the list of this Synod’s delegates, as it was for the Synod in 2014. Yet in 2014 there was no commission to deal with controversies, a body that was born during the Second Vatican Council and that was aimed at resolving controversies.

Those who changed the rules say that the changes will permit the Synod a more open discussion, because there will be no mid-term report, and because every part of the Synod’s working document will be discussed in small groups. However, this is exactly the way that collegiality is being shunted aside, because as things stand now, the Pope’s final message will overshadow everything else, and only his voice will be heard. Certainly the Pope’s presence is a guarantee of the Church’s unity. But no pope before this one has ever played such a crucial role during the actual Synod of Bishops, only to forego issuing a concluding document.

Nothing is known of the time to be given to discussions during the Synod. Pope Francis’ choices of his personal appointments to the Synod – made known on September 15 – are without any clear and definite criteria. For any rule you can find, you can also find at least an exception. The appointments appear to be the fruit of Pope Francis’ will to “hacer lìo,” which means to “make noise” in the Buenos Aires’ dialect. So it appears that the Pope wants every position possible to be represented in the debate.

But how will his final address be exploited after the Synod? The “adapters of doctrine” will probably focus more on primacy of conscience, since their attempt to pressure doctrinal and pastoral changes were defeated at the last Synod, when they failed to get a qualified majority of bishops. The “defenders of doctrine” will highlight the fact that there are already adequate pastoral responses to diverse social situations in place that also allow the Church to remain faithful to doctrine. However, the Pope might like the stress on primacy of conscience, as he often says that the people of God in its entirety cannot fail.

Pope Francis, in the end, considers popular piety a fundamental means to reviving faith, together with the emphasis on social justice issues. On these latter issues, the US speeches and the Synod of Bishops are intertwined.

If the Pope says anything showing that the Church is taking itself out of political debates, his move will be manipulated by the adapters at the Synod. The adapters, in fact, do not expect any other occasion to underscore more than this trip that the Pope does not want a Church built on an ideal, but one that is merely and concretely close to the people’s needs. A vague speech in political terms might be the occasion for the adapters to push the Pope to emphasize that the Church must adapt more to society in his address at the close of the Synod.

This is the reason the Pope’s visit to the US is intertwined with the Synod. Much will depend on the Pope’s exact words. Cardinal Gerhard Mueller, Prefect of the Congregation for the Doctrine of the Faith, has spoken about the risk of a schism. Cardinal Walter Kasper, a promoter of the agenda of mercy, has emphasized that “a pragmatic schism” is already underway. These are the terms of a struggle that deals with the very presence of the Church in society. The rest – including Pope Francis’ much-touted popularity – is smokescreen. The real discussion is taking place behind the newspaper and magazine covers dedicated to the Pope. And it is also beyond the words inaccurately attributed to him.

5 Responses to Pope Francis: A Red Line between the US Trip and the Synod