Pope Francis, a synod for the Church in Italy? 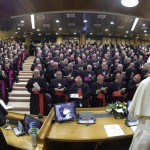 Pope Francis opened the general assembly of the Italian Bishops’ Conference with a harsh speech. In it, he complained about the Italian bishops because they did not follow his indications contained in the 2015 Pastoral Convention in Florence, and because they are mismanaging the new procedures for marriage nullity. However, above all, Pope Francis gave a sort of green light to the possibility to convoke a Synod for the Italian Church.

Fr. Antonio Spadaro, editor of the Jesuit-run magazine “La Civiltà Cattolica” and very close to Pope Francis, has recently launched the proposal of a Synod for Italy.

According to Fr. Spadaro, a synod for the Church in Italy should pay attention to Catholics committed to politics and social issues. These are “Christians that make Italy,” according to the headline of a special issue of “La Civiltà Cattolica” coinciding with the European elections.

Fr. Spadaro starting point was Father Luigi Sturzo, the Italian priest, exiled for opposing fascism and founder of the Popular Party. In 1919, Fr. Sturzo launched an appeal to “all the free and strong men.” Pondering on Fr. Sturzo’s manifesto, Fr. Spadaro asked whether “the time has come for a Synod of the Italian Church.”

Fr. Spadaro’s article prompted L’Osservatore Romano, the Vatican newspaper, to ask Bishop Domenico Pompili of Rieti, about a Synod. Bishop Pompili is highly regarded by Pope Francis and served for a long term in the Italian Bishops’ Conference as undersecretary and director of the national office of social communication.

Bishop Pompili said that the Synod “could have a beneficial effect,” and recalled that Pope Francis, in Florence 2015, asked “to consolidate an ever more synodal style” so that “shepherds and people will be able to interpret, and not just suffer, change.”

Bishop Pompili went beyond. He aims at reconciliation between two poles: the pole of the ethic for life and the pole of the social ethics. “The defense of the embryo and that of the migrant – he said – are two faces of the same coin.” This is Pope Francis’ principle, who also structured this way the Pontifical Academy for Life and the Pontifical Theological Institute John Paul II for Studies on Marriage and Family.

The proposal of a Synod for Italy was already launched back in 2015 by Bishop Nunzio Galantino, then general secretary of the Italian Bishops’ Conference. The project did not take off.

Pope Francis’ seems to have the project close to his heart, and also indicated the path. He asked, in his speech, that a Synod would start from the bottom and not from above. Vatican News immediately clarified that Pope Francis was not backing the summoning of a Synod. He was instead putting a topic on the table, without exerting any pressure.

Bishops were somewhat lukewarm to the idea. In part because it was a proposal coming from outside the Bishops’ Conference, as an imposition.

This coldness must be read through other lenses.

For years, in Italy, there was a Catholic party, which had a majority in Parliament. Since the 1990s, with the collapse of the Catholic party, the Catholic Church in Italy changed strategy: Catholics were called to be the ‘salt of the earth,’ committed in politics in every party. This strategy was well managed by Cardinal Camillo Ruini, who served for more than ten years as the Pope’s Vicar for the diocese of Rome and president of the Italian Bishops’ Conference.

During the 2000s, the Catholic point of view almost disappeared from the public discourse. In 2009, a school of social teaching led by Salesians attracted many leaders from the Catholic movements. They were asked to educate young people, to start a new cultural change. The campaign was immediately subjected to media leaks.

The school of social teaching did not aim at founding a new party, but at renewing politics through Catholic perspectives. Many of the people involved, however, wanted to create a new party or at least enter politics. Those who were backing a new party met in Todi. The meeting of Todi provided several ministers to the government led by Mario Monti. This way, both the idea of a Catholic party and a new Catholic culture from the bottom fell.

Fr. Spadaro and the Jesuits of Civiltà Cattolica may want to bring back the issue. The Synod might be the starting place for a new space for meetings for Catholics. Some even think about creating a new Catholic party.

Who would lead this new party, and how? The Italian Catholic laity still has not reacted. Fr. Spadaro challenged them: “What is the place of Christian fellowship in the modern democratic society? How could Christians contribute to a healthy democracy in Italy?”

There are also opinions against it. For example, Archbishop Corrado Lorefice of Palermo underscored that “a quick and simplistic opinion on the need for a political response by Catholics to the crisis of Italy would not be only a mistake, but also like pouring good wine in an old wineskin.”

It is even rumored that Fr. Spadaro will be appointed Archbishop of Naples to replace the soon to retire Cardinal Sepe. In that position, Fr. Spadaro would be part of the Italian Bishops’ Conference and pull strings from there.

These topics involve local and universal situations: Italy is Catholic by tradition and generally linked to the Vatican, and often a workshop for the universal Church. A Synod for the Italian Church could also pave the way for other national Synods. This is part of Pope Francis’ notion of a Church in a state of permanent Synod.

Another possibility is that Catholics will be gathered everywhere around a common agenda.

However, the proposal of the Synod can also be considered a response of progressives to the extraordinary success of events like the March for Life and Family Day in Italy.