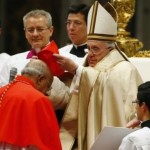 With three decisions made on June 26, Pope Francis gave his final shape to the Roman Curia and to the College of Cardinals. The decision to expand the order of Bishops within the College of Cardinals, the appointment of the new president for the Administration of the Patrimony of the Apostolic See and that of the new Prefect of the Vatican Library are part of a definite strategy.

In particular, the order of Deacons mirrors the Deaconies, that are the Roman regions administered with a special attention toward poor; the order of priests is that of the parishes to which Cardinals were linked to; the order of Bishops is linked to the ancient suburbicarian sees, that is, bishops’ sees that were part of Rome’s jurisdiction.

Paul VI reform was part of a wider reform, that also involved the Pontifical Household. Paul VI was not aiming at abolishing tradition. He in fact wanted to fit functions and offices to the times, without breaking with romanity. It can be correctly assessed that Paul VI’s reform was a modern exaltation of romanity.

Pope Francis’ decision is not just a breach with tradition. It is mostly a breach with Romanity, as an ancient episcopal see is made equal to a function. Scrolling the list, those promoted to the rank of Cardinal Bishops are some of the Pope’s main collaborators. All of them are head of a Vatican Congregation. This opens a possible further expansion of the order of Bishops.

Above all, Pope Francis has broken the very particular bond Cardinals Bishops had with Rome, which was an even stronger bond of that of the remaining college of Cardinals. All of the Cardinals, as the main collaborators of the Pope, are assigned a deaconry or a title, which corresponds to a church in Rome. New Cardinals Bishop are assigned a church of Rome, but this latter is not a suburbicarian see.

A second breaking choice is represented by the selection of the new president of the Administration for the Patrimony of the Apostolic See (APSA). Cardinal Domenico Calcagno retired, and was replaced by Bishop Nunzio Galantino, coming directly from the ranks of the Italian Bishops’ Conference, where he served as general secretary.

Cardinal Calcagno had spent 11 years in the APSA, first as Secretary and then as president. He knew everything of the administration. In his recent interview with Reuters, Pope Francis complained about a lack of clarity in the management of the Vatican real estate. It is noteworthy to remember that, under Pope Francis, the Administration underwent various adjustments, and taken out at the beginning from the path of reforms initially foreseen.

In 2013, the APSA established its consultants (that every Vatican body has) as members of a supervisory board. This company-like choice was later corrected with other norms, that brought back 0 APSA to its old ways, ending the path of the Administration toward more clarity about its role.

As established in 2012, and as reported by the Council of Europe’s MONEYVAL committee that year, the accounts to the APSA have been abolished or transferred. The presence of accounts was an anomaly inherited by the ancient management of the patrimony. This way, APSA was ever more shaped as a Church central body.

The appointment of Bishop Galantino will mark a change of mentality. As General Secretary of the Italian Bishops’ Conference, Bishop Galantino managed the “Otto per Mille” funds, that is the tax share Italian citizens can give to the Church or to other religious confessions that have a concordate with Italy or to the State itself.

Certainly, Bishop Galantino has no administrative experience other than in his home diocese, and proved to like populist and colorful affirmation more than prudent ones. His way of speaking and behaving put the Church on the spotlight.

Considered a good organizer within the Italian Bishops’ Conference, it is likely his way of governing will not be a Vatican one. By Vatican “modus operandi,” it is intended a management of the Vatican finances that also takes into account the particularity of the Holy See, and of the fact that the Holy See is a State, with its peculiarity. The Holy See problem is not transparency, but management. Pope Francis wants to break with the old mentality. It is not clear if this breach will be healthy for the Holy See sovereignty. Much will depend on future choices.

Finally, Pope Francis appointed Fr. José Calança Tolentino de Mendonça as Prefect of the Vatican Library. Fr. Tolentino has served until now as vice-rector of the Catholic University of Lisboa (Portugal), and will replace Archbishop Jean-Louis Brugues. Archbishop Brugues has not turned 75 yet (he will in November) and above all he has not stepped down yet. Pope Francis, in the end, wanted a new phase for the Vatican Library, and did not want to wait. It must be noted that the Pope had a poor relation with Arcbishop Brugues: according to Argentinian journalists close to the Pope, when Archbishop Brugues was secretary to the Congregation for Education, he opposed the appointment of Victor Fernandez as rector of the Catholic University of Argentina.

Whether the rumors are true or not, it is certain that Pope Francis’ first appointment was the elevation of Fernandez to Archbishop, and that the appointment of a new Prefect for the Vatican Library takes place in the week when Archbishop Fernandez, labeled as the Pope’s ghostwriter, took possession of his new archdiocese of La Plata.

To mark the new phase, Pope Francis selected as Prefect of the Vatican Apostolic Library and the Secret Archive, a priests, not a bishop, beloved for the Spiritual Exercises he directed during Lent at the Roman Curia. Certainly, Fr. Tolentino has little knowledge of the library’s ordinary work. The Library purchases every day thousands of books, and maintains a series of institutional relations of a certain level.

Pope Francis is operating these three main changes in the week of his fifth Consistory. With this consistory, the College of Cardinals has finalized a shift: from now on, Cardinals created by Pope Francis are more than the others, if we consider cardinals who are below 80 and so eligible to vote in a conclave.

This is how Pope Francis’ Church takes shape. Since the beginning, the selection of the members of the College of Cardinals pointed to this kind of reform. Cardinals have been chosen mostly for their geographic representativeness, with no consideration of traditional issues unless traditional issues did not conform with the Pope’s thought. The same happened with the order of Cardinals Bishop, expanded to guarantee a major representativity.

With Pope Francis, the Catholic Church linked to Rome seems to dissolve. Rome not as a local reality, but as a universal model, the Pope’s see and for this reason guide of the dioceses all over the world. Pope Francis, with his decisions, is apparently willing to break with the Pontificate of Rome.

This anti-Romanity has been typical of all reforms and schisms, from the Lutheran to the Anglican one, passing through the French Gallican movement. There is, in the end, a greater protagonism of particular Churches, while the Pope acts as a guarantor and makes central decisions when he wants to govern.

Roman tradition did not mean to be closed to new things, but a new way to live them. Now, this tradition is at risk of disappearing. This is not the fruit of the internationalization of the Curia, started under Pius XII, as internationalization meant that priests from all over the world came to Rome to work in the Vatican after they had studied in Rome and having served for a while in their homelands. This is rather a centralization of the principle of peripheries.

How much this loss of Romanity will cost to the Church, only time will tell.