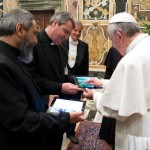 Reforms will be accomplished. Pope Francis reiterated this point once again while meeting the members of the Roman Curia for Christmas greetings. The meeting was noteworthy because several “curiali” were absent, so many that Cardinal Angelo Sodano, Dean of the College of Cardinals, had to acknowledge the fact publicly. Is this a signal that the Curia is opposing Pope Francis? Not really. Instead, the absences signal that many would like the reforms to be given a clear direction. And they also signal that in the midst of scandals, not all the members of the Curia wanted to be battered, since last year the Pope listed 15 curial maladies.

One year later, Pope Francis balanced his judgement. In his speech, he acknowledged the efficiency, fidelity and attention to work of the employees and members of the Curia. He thanked the “hidden Vatican” (this is not a Papal phrase) that is composed of people quietly working within the Vatican and for the Vatican. They do not grab headlines, but they carry on the Curia machine. Pope Francis also thanked Vatican employees.

Pope Francis’ change of viewpoint was noticed during the flight back from the Central African Republic. During the usual press conference, Pope Francis also spoke about Benedict XVI’s election. By doing this, he deconstructed the narrative that had been built around him, one that was probably accompanied by a well-defined agenda behind his back. This agenda was also furthered by the decision to opt for outsourcing during the first year of Francis’ pontificate. Now the plan is seemingly the opposite: appointments come preferably from inside the Vatican.

As already mentioned, these appointments show that the reform is continuing, but at the same time that it needs internal continuity. Since the beginning of the Vatileaks 2 trial, Pope Francis appears to have abandoned the idea of hiring external consultants or experts. Even Gianfranco Mammì, the new Director General of the Institute for his entire career, starting as a cashier. He was also one of Pope Francis’ trusted men, as the Pope met him when Mammì took care of Latin American affairs at the IOR.

New appointments in communications also signal another point: that the Holy See wants to pay ever greater attention to the way that secular media perceives it. Greg Burke, a former correspondent for Fox News, was hired with a three-year contract as Advisor for Communications in the Secretariat of State during the first Vatileaks season. He took part at Castel Gandolfo in the meeting between Benedict XVI and the Cardinalatial Commission on the Leaking of Documents in the summer of 2012 (that Commission had also questioned a couple of prominent “vaticanisti”).

Greg Burke also entertained good relations with the secular and Anglo-American media environment that still “makes the news” in the world. While he was Advisor, the Financial Times published a piece by Benedict XVI for Christmas 2012 (though with a poor headline on the first page); the data on the Church’s response to pedophilia were delivered in the world by secular media first; the news of alleged insider trading operating through an APSA account was first published by Reuters. Greg Burke cannot be accused of having necessarily been the “deus ex machina” of all of these scoops. Certainly, though, he emphasized paying attention to secular media.

The same happened with Msgr. Viganò’s appointment as Director of Vatican Television. He orchestrated the wonderful clip of Benedict XVI’s last voyage as a Pope in a helicopter to Castel Gandolfo. But he also had the idea of granting an exclusive interview between Pope Francis and the US network ABC before the trip to United States. Msgr. Viganò knows how to communicate, and he communicates wherever he can get a good audience, and the secular media are in fact a perfect stage. Spreading the message is the most fundamental thing to him. As Prefect of the Secretariat for Communications, Msgr. Viganò will take over the reins not only of the structures, but also of the contents of Vatican media: one of the proposals for reform in Vatican communications deals with the creation of a unique newsroom for all Vatican media.

How the content will be delivered is yet to be seen. But these appointments show the Vatican’s perceived need to maintain good relations with the secular world, as if the judgment of secular media were pivotal for the life of the Church. It might be true, but this rationale bears the risk of sacrificing the development of a specifically Catholic journalism, one that, although not institutional, is nevertheless faithful to the institution, able to deliver in an objective and correct way the main themes of interest to the Vatican and the Catholic Church.

As Vatican media attachés seek to put forward the best image possible for the benefit of secular media, and books of the popes are published with publishing houses other than the Vatican Publishing House (Libreria Editrice Vaticana) which owns the rights to the Pope’s words (as happened twice with Benedict XVI’s “Jesus of Nazareth”), Catholic media are currently experiencing a deep crisis. Many magazines have been shut down. The monthly 30 Giorni (30 Days) quit publishing a couple years ago, in spite of the fact that it provided an important cultural service to missions and dioceses. This year, “Il Regno” and “Settimana”, two magazines published by the Dehonian Fathers, were shut down: the Catholic world in Italy thus lost two important voices in a wide debate.

Even “Ad Gentes”, the only missionary magazine, quit publication, while the news of the shutdown of the Missionary Press Agency MISNA came out suddenly some days ago. There are no investments in these missionary journalism enterprises, and they are not sold widely enough to break even.

It is also a matter of contents. Commenting the closure of “Ad Gentes,” Fr. Piero Gheddo, a longstanding missionary, criticized the magazine’s drift toward social themes, while the missionary ideal seemed somehow lost. He stressed the need to speak about God. And speaking about God is a must today as ever, despite (or thanks to) the great Pope Francis’ missionary spirit.

Not by chance, the latest Ratzinger Schuelerkreis (the circle of former Ratzinger’s students) discussed “Talking about God in the contemporary world”. According to Msgr. Tomas Halik, who was this year’s Schuelerkreis lecturer, Christianity “is living its afternoon” (not a decline, but not a rise either), which needs to reignite the new evangelization.

The changes in the structures of communication might help to improve the Church’s image in the media, but they do not solve the issue of content. Nor do the improved relations with the secular world help the spread of more balanced and professional information concerning the Church, despite the sympathies that this or any other Pope might arouse.

In fact, the secular world often looks at the Church through a keyhole, with no intention of explaining the Church in all of its nuances and from every perspective. The final aim of secular media’s coverage of the Church is swinging from an emphasis on its weaknesses to an enthusiasm toward the Church anytime this might help to sell more product. Behind the secular press is a need for profit and image exploitation that the Catholic Press cannot adopt.

Pope Francis’ mission for the upcoming years should be that of returning to the original charism of communicating the Gospel, and through it, the truth. This is a crucial topic of discussion, at every level of the Church. Even ecclesiastical movements are engaging in strong debates on the issues of the original charism. In the search for needed professionalization, the search for identity was lost from view.

This is also true in the Vatican, and now adjustments are in the making. After the end of the period of indiscriminate outsourcing and of the hiring of external consultants that in fact contributed to leaks, it is now the time for an enlightened “insourcing”, able to raise up a new generation of professionals with great knowledge of the Church’s institutions. In the end, this is also a step toward an old-fashioned style, which the Vatican has somewhat lost in the last two decades.

Pope Francis is apparently moving toward this direction. He will succeed only when information from the Church and about the Church will not be tailored to the needs of the secular world, but to truth and deep identity. This is the real, enormous challenge for the upcoming year. This challenge of communication goes beyond Curia reform as well as Pope Francis’ reform of bishops.

3 Responses to Pope Francis and Communications: Next Year’s Challenges