Pope Francis, and dialogue at all costs 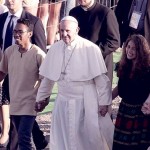 Meeting the World Council of Churches on June 21, Pope Francis said dialogue is not a strategy, but a necessity, and that in the end dialogue always seems to be “operating with a loss.” He was obviously referring to ecumenical dialogue, but the speech showed Pope Francis’ rationale.

On June 20, excerpts of a long interview Pope Francis granted to Reuters already confirmed this rationale. Speaking about Cardinal Joseph Zen’s concern about a possible agreement with China, Pope Francis underscored that yes, dialogue is a risk, but “I prefer the risk than the certain defeat coming from not dialoguing.”

This is the outward Church approach. This approach has an extraordinary missionary strength, but also its limits, if not handled with care.

One of these limits became very clear when the Instrumentum Laboris (working document) of the 2018 Synod on young people was presented June 19. The document is very long, and it is a strong candidate to be the longest working document ever in the history of Synods, with its 214 paragraphs and 52 pages.

The document’s limits come from the “outward Church” approach.

First of all, the document is overall a sociological document. So was the case with the guiding lines of the Synod, and with the International Seminary ahead of the Synod and the pre-Synod of young people.

Reality is described, but there is no mention of how to shape reality. As if the Catholic Church had nothing to propose to the world, and to young people.

In addition, the “spiritual thirst” of young people (and people who are not young anymore, too) is apparently marginalized. The working document claims that the culture of indifference is not winning, and that there is a return of the sacred. The document, however, does not go in depth to the reasons why the sacred is coming back, while it emphasizes social issues – like poverty and marginalization.

This is fruit of the “pastoral of the ear,” the need to be listening to the people. The dialogue, however, is not presented as a full proposal. It is rather an assessment of things as they are.

The Holy See has always refused categorizations like LGBT, as people must be considered as people, and not qualified according to their sexual orientation.

The issue is introduced in paragraph 197. The paragraph reads that “some LGBT young people, through various contributions sent to the Secretariat of the Synod, long for the benefits of a greater proximity and care from the Church.”

The document also reads that “some Bishops’ Conferences are trying to understand what to propose to young people that chose to come together in homosexual couples instead of heterosexual couples and who wish above all to stay close to the Church.”

The Holy See’s basic principle is that all human beings are considered equal, despite their sexual orientation. For this reason, it cannot support the categorization of people according to their sexual behavior, which the term LGBT gives rise to, nor a document that talks about discrimination against homosexuals. The Holy See focuses on the need to defend every human being.

From a wider perspective, the Holy See has always been suspicious of terms like “Islamophobia” and “Christianophobia” (although it has used this term occasionally), always on the principle of not judging people on the basis of categories. Fostering human dignity also means understanding the inner reasons of the hatred, beyond any religious belonging.

Now, it may be possible that, when the Holy See fights for these principles in the international arena and rejects LGBT terminology, some will recall that the Holy See already used LGBT in a document, claiming that it means that the category has been formally accepted.

It might seem a remote possibility, or a mere issues of details. But nothing is a detail, in international congresses. The Holy See knows it: everything is handled with extreme care, from the choice of the words to the themes to develop.

Asked why the term LGBT was included in the Synod’s working document, Cardinal Baldisseri, secretary general of the Synod, said that the document has just taken it from the final document of the pre-Synod of young people, to which they were very faithful.

This was in order to listen to young people. But this generates problems, too. The document of the pre-Synod of young people was born out of a closed door meeting of young people, far from Rome, where the participants were asked to respond to questions that were obviously leading to these responses. There was almost the will that young people were going to describe reality that way.

In fact the term LGBT is not included in the pre-Synod document, so Cardinal Baldisseri was at least mistaken. But even if it were, the pre-Synod document is not an official Vatican document. Young people responded to the questions, but in some cases they also complained that the whole final text seemed to be pre-compiled.

The truth is that, even in that case, there was a lack of will from the Church to educate people. The pastoral of the ear is not accompanied by the spreading of the Christian message.

Assuming the worst, one might say that this happened in bad faith. That there is an agenda behind Pope Francis’ back that aims at changing doctrine, or to put the Church and consolidated pastoral practices in crisis with marginal adjustments that at first do not generate scandal.

Thinking negatively, one could conclude that the Pope is misinformed, as could be deduced by the fact that he said in a Reuters interview that he got to know about the Dubia letter from newspapers.

However, such concerns may be exaggerated. Beyond agendas and ideological pushes, it is the way things are handled that have become superficial. This is how potentially good ideas like the pastoral of the ear can become boomerangs. Sometimes willingly, sometimes unwillingly. This is the risk of the dialogue at all costs promoted by Pope Francis.