Pope Francis, here is the Church’s future challenge Laity, Family and Life, a glimpse into its statutes to understand the Pope

Pope Francis and Eastern Churches, the ecumenism of the equal closeness 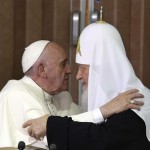 Giulio Andreotti was an Italian statesman who dominated the Italian political scene for more than 40 years. Eight times premier, Andreotti was both a target of attacks and praises. Among the attacks, that of embracing an excessively “philo-arabic” policy in the Middle East, not maintaining the right equidistance between Israeli and Palestinian people. To these critics, Andreotti responded: “Rather than equidistant, we are equally close.”

This description can be also applied to Vatican diplomatic initiatives under Pope Francis, somewhat because of Cardinal Pietro Parolin, the Vatican Secretary of State, who is one of the main heirs of that Christian Democratic tradition that governed Italy for decades and that had in Andreotti one of its main characters. And a little because Pope Francis’ culture of the encounter is aimed at having equally close relations to everyone.

This also applies to ecumenical dialogue, and in particular in relations with Orthodox Churches.

Pope Francis’ latest initiative is to convoke for July 7th a meeting of prayer for the Middle East in Bari, inviting all the Middle East Patriarchs and Bishops, also those of non Catholic tradition, especially the Orthodox.

There are still no details about the event – it could be a two-day program that involves the Pope in the very last day – nor it is known who responded positively to the invitation.

Certainly, the initiative to talk with all the Middle East patriarchs is one further step in the path toward unity that Pope Francis always preaches about. This unity is based on a pragmatic ecumenism, rather than in theology. The themes of the war in Syria and of the Christian persecution in the Middle East, as well as those of peace and the fight against secularization are shared by all the Christian churches, beyond their specific denominations.

Pope Francis wants to gather all the possible Christian denominations for an effort of unity that goes beyond still existing theological disputes. In this effort, he makes no distinctions. Not even with the Orthodox.

The Orthodox world, in fact, is undergoing a deep internal debate. The Moscow Patriarchate seems to be always more willing to want to take a central place in the world scene. Patriarch Kirill’s trip to Albania is part of this process of strengthening of the Orthodox, although it received scant media coverage.

On the other hand, Patriarch Bartholomew of Constantinople worked to prepare the Great and Holy Pan-Orthodox Council. Only in the very last moment the Moscow Patriarchate withdrew from participation, followed by other three patriarchates.

Hence, relations between Constantinople and Moscow are tense. Bartholomew did not go to Russia to celebrate the 100th anniversary of the re-establishment of the Moscow Patriarchate as the other Orthodox Patriarchs did, and relations now risk to get cooler because of the Ukrainian issue.

In Ukraine, in fact, there are two independent Orthodox Churches, although not legitimate, and president Poroshenko asked the Ecumenical Patriarchate – the first in the Orthodox sinaxis – to issue a tomos of autocephaly, thus legitimating them. The way in which Bartholomew will handle the issue will determine the future relations.

Pope Francis does not of course take any position. He chose Bari for the meeting of prayer, a destination for both Bartholomew and the Metropolitan Hilarion, head of the external relations of the Moscow Patriarchate. Both Constantinople and Moscow have always set the gaze to Bari. After the February 2016 historic meeting in Havana, Pope Francis accepted Patriarch Kirill’s request to transfer some of St. Nicholas’ relics from Bari to Moscow. And Bari was considered a likely scenario for a meeting between Benedict XVI and Kirill.

Certainly, the prayer meeting called by the Pope is above the political and nationalistic aspects that have always characterized Orthodox Churches.

However, the meeting is also a response to a Kirill initiative. After the last US-UK-French air strikes on Syria, Patriarch Kirill took the initiative to call all the Orthodox Bishops of the Middle East and Pope Francis. After that, the Moscow Patriarchate delivered a joint declaration that included Pope Francis’ signature, although Pope Francis had never signed it. However, according to a spokesperson of the Moscow Patriarchate the declaration was also “inspired by the conversation with the Pope.”

This detail shows that the risk of political instrumentalization is always behind the corner. Also for this reason Pope Francis presents “pastoral” initiatives, as “pastoral” – in his words – was the Havana joint declaration, when in fact the text was a little imbalanced toward the Orthodox side.

Rather that a new Ostpolitik, Pope Francis seems to apply a new “pragmatism of the dialogue”, trying not be instrumentalized and at the same time not blocking any bridges.

This is why the meeting of Bari might to be balanced by another initiative.

It is rumored that Pope Francis will also go to Assisi before the end of the year. For that occasion – it would be the fourth time the Pope visits St. Francis’ city – there could also be a second meeting with Patriarch Kirill.

It would be difficult for this meeting to take place in Bari, since Patriarch Bartholomew will be there, too, as he is one of the Patriarchs of the Eastern Churches affected by the conflict in the Middle East. And this is why the meeting would take place in Assisi. The city also awaits Russian president Putin, who will be awarded with the Assisi Pax, an award for peace efforts.

Local press in Assisi reported that a delegation from Assisi recently went to visit Metropolitan Hilarion, to transmit through him an invitation for Patriarch Kirill to visit Assisi on the occasion of the award ceremony. Local sources also spread the rumor that the meeting is intended to have a spiritual character, with the presence of the maximum spiritual authorities of both of the confessions. That is, Pope Francis and Patriarch Kirill.

In addition, president Putin, who has already met with Pope Francis twice, would back the meeting in order to set the basis for the first visit of a Pope to Moscow. It was St. John Paul II’s dream, and relations between the Holy See and Russia are good, and even improved by the September 2016 Cardinal Parolin’s visit to Russia.

Assisi might then be the scenario that makes visible Pope Francis’ closeness to the Moscow Patriarchate, while re-balancing the invitation to Bartholomew and other Eastern Patriarchs.

In the meantime, Pope Francis has kept strengthening ecumenical links with other Christian Confessions.

There are the good relations he maintains with the Anglican Church – and the climax was the first Papal visit to an Anglican parish – and with the Lutheran Church, highlighted in his trip to Lund.

Pope Francis’ trip to Georgia established relations with the Georgian Orthodox Church, among the most conservatives in the world: in Georgia, if a Catholic wants to marry an Orthodox, he is required to be baptized again. But the re-baptism practice is just a practical detail to Pope Francis, who considers Patriarch Ilia II as a “man of God.”

Pope Francis’ trip to Egypt and the joint declaration of Pope Francis and Pope Tawadros II highlighted the good relations with the Orthodox Coptic Church, that every year celebrates on May 8 the first visit of Pope Tawadros to Pope Francis, that took place May 8, 2013.

Pope Francis also extended his hands toward the Orthodox world by establishing a Catholic-Orthodox dialogue with Cardinal Aloizje Stepinac, Archbishop of Zagreb during the Second World War and for a short time thereafter, who was a martyr of communism and nazism: beatified by John Paul II, his canonization is resisted by the Serbian Orthodox Church, mostly for political reasons.

Finally, Pope Francis is maintaining relations with Patriarch Daniel of Romania. The Pope will likely visit Bucharest in 2019, to foster the ecumenical dialogue. The trip was previewed in 2018, but the 100th anniversary of Romanian independence could lead to an instrumentalization of the Papal trip.

All of these relations are based on good will, faith, ecumenism of blood and pragmatic challenges, rather than on theological convergence. This is how Pope Francis is “equally close” to every Orthodox Church, trying to foster ecumenical dialogue.