Pope Francis and the response to coronavirus Pope Francis, the signs of the times

Pope Francis and reforms. He has never been more alone than now 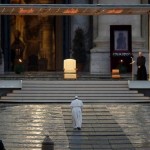 While Italy is locked down because of the Covid-19 pandemic, the Holy See has nevertheless continued to work, though with less staff on site. Also, Pope Francis has kept seeing regularly the heads of dicasteries, according to the so-called “udienze di tabella” (pre-scheduled and recurrent according to a fix cycle). The life of the Church does not stop.

All of these audiences prove that the life of the Curia goes on, though with reduced ranks. The most striking audience are those of March 12. Pope Francis received Cardinal Giovanni Battista Re, Dean of the College of Cardinals. Before him, the Pope met with Fr. Roberto Dotta, abbot of the Abbey of St. Paul Outside the Walls, and Cardinal Stanislaw Rylko, archpriest of the St. Mary the Major Basilica.

Aside from the meeting with the heads of the two Papal Basilicas, which might be a clue for some future initiative, the presence on the schedule of the Dean of the College of Cardinals always looks as a warning. It does, at least, since February 9, 2013, when Cardinal Angelo Sodano, then Dean, was received by Benedict XVI. Two days after, the Pope emeritus announced his renunciation.

Why did Pope Francis meet with the Dean of the College of Cardinals? Renunciation does not seem in the offing. Pope Francis’ initiatives during these days are intended to encourage people to overcome the coronavirus crisis and to promote prayers for the end of the pandemic. On March 25, Pope Francis prayed the Our Father and invited all the Christian leaders in the world to join him in doing that. On March 27, he delivered an exceptional Urbi et orbi blessing from the yard of St. Peter’s basilica directed towards an empty St. Peter’s Square. Next to him was the crucifix of the St. Marcellus church that saved Rome from the 1522 plague.

However, the role of the Dean of Cardinals is going to change, and we can assume there will be more audiences with the Dean scheduled. Perhaps, a first sign of the change of the office occurred when Cardinal Re responded to an open and circular letter sent to the whole college of Cardinals by Cardinal Joseph Zen, bishop emeritus of Hong Kong.

As is known, Cardinal Zen sent a letter to each cardinal to expose his dubia (doubts) on the China – Holy See confidential agreement on the appointment of bishops. Cardinal Re responded to Cardinal Zen with an official letter, registered as the first act of the office of the recently elected Dean.

Pope Francis has already reformed the office of the Dean of the College of Cardinals. Before, it was a life term position. Now, the Dean is elected on a five-year term basis, renewable just once. Pope Francis also asked that the Dean be committed full time to the job, but this request was not formalized.

It follows from the letter sent to Cardinal Zen that the Dean of the College of Cardinals will shape his activity differently. One of his new tasks might be the resolution of controversies among cardinals, or addressed by the cardinals to the Pope. Following this rationale, today, the dubia issued by four Cardinals following the publication of the exhortation Amoris Laetitia would get a response by the Dean of the College of Cardinals. Pope Francis, in fact, never personally addressed the issue.

The new role of the Dean is part of the general Curia reform under study. All of Pope Francis’s meetings in the last two weeks have been “udienze di tabella.” However, we cannot underestimate the fact that many of these dicasteries will undergo reform.

Five out of nine heads of the Congregations turned, or are going to turn this year, 75 years old, which is the retirement age. Pope Francis is already thinking about their succession.

Despite the lockdown, this is a transition time for Pope Francis. He has to close the old files and open new ones. During these days of lockdown, news comes out, but they barely come out via the Holy See Press Office.

The provisions of the Congregation for Divine Worship for Easter were published directly on the web site of the Congregation and announced by Tweet by Cardinal Sarah on March 22. Not until March 25 was the update of the provisions published by the Holy See Press Office. At a minimum, there was no coordination between the dicastery and the Holy See communication staff.

On March 25, the Holy See published two decrees on the Mass in extraordinary rite, issued by the Congregation for the Doctrine of the Faith. The orders are, in the end, an outcome of the work done by the Commission Ecclesia Dei, now absorbed into the Congregation.

There is the impression that everything in the Curia will change from June on, and that the transition is not being governed. There is not much institutional thinking, and for this reason, the Holy See seems not able to manage new things.

In this new scenario, the office of the Dean might be used to shield the Pope, or at least to face the criticism raised by the cardinals themselves. It is also foreseeable that the Pope will always be more present in the media to revive his image – in fact, the Pope already granted two phone interviews and one Skype interview amid the coronavirus emergency.

Pope Francis’ image is not at stake, though. The governability of the Church is at stake. The transition toward the “new world” will not be painless, as no change is. But in this case, it seems it will be worse since the criticism is also raised by people loyal to Pope Francis. Pope Francis has never been as alone as he is now.

2 Responses to Pope Francis and reforms. He has never been more alone than now