Pope Francis and the altar of hypocrisy 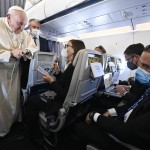 During the press conference on the return flight from Greece, Pope Francis explained why he accepted the resignation of Archbishop Michel Aupetit of Paris. Aupetit, a strong voice in the French episcopate, was accused by a journalistic investigation of having had improper relations with a woman. The archbishop admitted the inappropriate exchange of messages but stressed that there was no romantic relationship and that his superiors have always been informed. However, he resigned – or, better, he returned his mandate to the Pope, as he explained.

The news that Pope Francis had accepted his resignation came on December 2, the very day the Pope began his trip to Cyprus and Greece. And at the very end of that trip, Pope Francis explained his position, trying to turn the problem to journalists (“Do you know what he did? Do the investigation”), then explaining, erroneously, that it was “caresses and massages” to a secretary (who never came into the picture, and in fact, the reference was cut from the official transcript) and finally concluding that Aupetit had perhaps sinned, but that it was not such a severe sin. And that the Church, after all, had accepted Peter as head, and Peter had committed an even graver sin, that of denying Jesus.

“I – Pope Francis concluded – accepted Aupetit’s resignation not on the altar of truth, but the altar of hypocrisy.” Strong words, which, however, also confirm a sense of crisis in the Church.

Archbishop Aupetit was not forced to leave because he was found guilty of something but because gossip had ruined his reputation. As already happened to Cardinal Philippe Barbarin, acquitted of any accusation of covering up abuses and yet forced to resign to save the good name of his archdiocese; as already happened to Cardinal George Pell, who returned to Australia to “clean up his name” and was dismissed from his posts in the Curia; as also happened to Cardinal Rainer Maria Woelki, archbishop of Cologne, who suffered a media mud machine for having questioned the results of an initial abuse report and ended up in retreat and penance for six months.

But there are other cases. The most emblematic is that of the Chilean bishops. After Pope Francis approved the appointment of Bishop Barros Madrid to head the Osono diocese, in Chile, where he had been in the magic circle of the well-known abuser Karadima, protests in Chile, but also from elsewhere, even in Vatican institutions, multiplied. Yet, Pope Francis defended the choice to the end, even on the return flight from the trip to Chile. Then, however, he sent an inspection and twice summoned the bishops of Chile to Rome, and at the second meeting, they all resigned, leaving his hands free.

Therefore, the decision to accept Aupetit’s resignation is not surprising, considering the precedents. The Pope has admitted several times that there are media attacks against the Church, he did so surprisingly even at the end of the anti-abuse summit he wanted in Rome in February 2019. Pope Francis has always been very sensitive to media opinion.

The excuse is that the bishops would have lost the possibility of governing entirely due to the “chatter.” But if the push for the resignation of every bishop that is hit by the media mud machine is accepted, little or nothing is done to resist the chatter.

If all this is not surprising, it is somewhat surprising that the Pope decided to speak about it openly, thus confirming a modus operandi. The comments about Aupetit sound, at first, beautiful and profound. The Pope shows that he is aware of a problem and is facing it. Among other things, comments about Aupetit were preceded by critical words on the abuse report, the CIASE – and it is worth remembering that the same criticism and requests for contextualization had cost Karine Dalle the post of spokesperson for the French bishops.

But, after realizing the problem, Pope Francis still keeps his decision to avoid a war, enter into dialogue with public opinion, and make the decisions that public opinion expects. The fact that the bishop’s reputation has been compromised is real, but at the same time, there are different ways of handling the situation if you don’t want to go stand firm. Pope Francis, however, prefers to choose the one that allows him to have the media on his side. One way, one could say, of making the Catholic Church, constantly under attack, dodge bullets.

Pope Francis’ intentions are probably the best in the world. But the fact that he openly said that he had sacrificed a bishop on the altar of hypocrisy cannot help but raise questions.

Because a Pope who decides to sacrifice a bishop on the altar of hypocrisy risks losing a lot of his credibility, since the situation prompts many questions. For example: how many decisions did Pope Francis make that sacrificed someone on the altar of hypocrisy? And again, are the legitimate attention and clarifications on some issues by the Pope dictated by sincere interest, or are they chosen to influence public opinion? How much, then, is narrative, and how much is truth in the pontificate of Pope Francis?

These are questions that remain in the background but which are pressing. Because the words of Pope Francis on Aupetit, in the end, certify the possibility of an actual modus operandi of the Pope. A modus operandi that risks putting even good things into question. After all, the secular media have loved almost everything about Pope Francis, going so far as to say that there is a conspiracy by conservatives not to show the Pope’s most extreme positions in favor of the poor.

The secular media loved seeing Francis beat on the Roman Curia. They loved the ambiguity of language that arose from the application of Amoris Laetitia. They appreciated his insisting on ecological and environmental issues, which, after all, are the same ones that are supported in the world. In irregular situations, the Pope prefers not to pronounce himself. Sometimes a note arrives from the Congregation for the Doctrine of the Faith on cases where discussion cannot be avoided.

But is all of this real? What is the substance behind the Pope’s actions? What will remain? In the end, the altar of hypocrisy is that of a pagan god who needs human sacrifices. It cannot and will not last long. Probably the Pope is counting on this, choosing the lesser evil.

Instead, the altar of truth asks us to exercise and live justice. It doesn’t require human sacrifices. But it requires the path of personal sacrifice and dedication. Unfortunately, the Pope’s words suggest that he has chosen, for practicality, as a matter of public opinion, the altar of hypocrisy. How many other times in the pontificate might he has chosen this altar?

7 Responses to Pope Francis and the altar of hypocrisy