Pope Francis, four issues on the table for the future of the Church 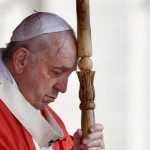 Until now, Pope Francis appears to have escaped the criticism and attacks levied against the Church. Even when it comes to the recent Vatican financial scandals, Pope Francis’ name is never mentioned. It is strange since the Pope, though he never took any responsibility for what happened, always presented himself as a guarantor, a leader committed to clarify and solve the most difficult situations.

Although the attacks do not directly target Pope Francis, the situation is shedding light on some of Pope Francis’ shortcomings in governing the Church and in addressing some of the most critical – yet hidden – issues.

There are many issues on the table, and the future of the Church also depends on them.

The first significant issue is about financial scandals. It is particularly striking that the narrative on the Vatican investigation is totally in Italian judicial journalists’ hands. These journalists seize the center stage, get leaked documents, and publish them and decide who must be targeted. They may be just working as clearing houses, exploited by stronger powers. Sometimes they even mention names apparently by chance. Likely, they received instructions to do so. Those who know the Vatican always know who is the real target of the attacks.

The communications function of the Holy See should manage this situation. Where is it? And where is the Tribunal of the Vatican City State? Amid spectacular arrests and extradition requests, the Vatican City State Tribunal seems inactive while its documents are leaked. Not by chance, the news portal Il Sismografo noted that the president of the Vatican Tribunal, Giuseppe Pignatone, is also an op-ed writer of the GEDI Publishing Groups, which includes several newspapers and magazines —among them La Repubblica, La Stampa and L’Espresso.

Pope Francis, however, seems not to be interested in this nexus between some media and the Vatican judicial authority, and neither is anyone from the Vatican communications machine. Beyond the need to push for transparency, nobody is sharply facing the media issue. Pope Francis himself never misses thanking the media who uncover the most difficult cases. Kudos to them. Why does the Pope not intervene to defend the institution? And why does he accept the pulse of the narrative being in the hands of the Italian judicial newspeople?

The second issue is the relation with Italy. Under Pope Francis, the Holy See narrative has turned to be always more Italian, while international themes have disappeared.

Why, then, has the Pope failed to embrace the generational relay and instead backed the return of an old, Italian-oriented mentality? It is noteworthy Pope Francis has recently appointed five Gentlemen of His Holiness, all coming from the Italian ceremonial ranks.

The third issue is about the Holy See’s sovereignty: it has always been the real target of the attacks and is questioned by many people within the Church. It is difficult to understand why the importance of the Holy See sovereignty is not recognized, but it is indeed easy to note that scandals are exploited to portray an image of a corrupt State on the media. Hence, the notion of a faith that can express itself disincarnate, free from the State’s weight. Pius XI dubbed the Vatican City State as “that small piece of flesh that supports the soul.” That piece of flesh justifies the Holy See presence in the international arena and gives the Holy See enough weight to speak out and protect religious freedom all over the world.

Incidentally, Pope Francis does not seem to have noticed the attacks against sovereignty, or – if he did – he considers them as a secondary issue compared to the Church’s big pastoral task. Sometimes, it seems that the Pope himself does not care about these issues. However, when the Pope can resort to the Holy See sovereignty to channel his messages, he has no hesitation in doing it.

The fourth issue is about the situation in the Vatican. As usual, the latest scandals hit not only those under investigation but also the hidden Vatican that holds the Holy See up. People in the hidden Vatican are demoralized. Sometimes, they see their names unjustly popping up in newspapers. Some other times, they see people suspended or fired without explanations nor formal allegations. For this reason, the hidden Vatican lives in confusion, carries forward with managing daily operations, and does not participate in any creative process to reform things.

Will Pope Francis look to these people for guidance? Or will he remain as sole in command, marginalizing the broader Vatican team in favor of a series of small groups that will help him advance what he has in mind?

In all of these cases, Pope Francis is overlooking some essential topics. The Pope is instead acting instinctively, without a real strategy. Also, the Curia reform goes on with steps forward and steps back, without a clear vision. According to Fr. Antonio Spadaro, one of Pope Francis’ closest confidants, we should not seek any grand vision.

In the end, the Holy See has now turned into the spoils of war of the judicial news, while the attacks against the Church are still ongoing. Those who report the attacks, however, do not look at the broader context. They mostly focus on the details of corruption, and they lose sight of the precious work done by the hidden Vatican. The Pope sometimes does the same. We do not know for what purpose.

One Response to Pope Francis, four issues on the table for the future of the Church