Pope Francis and the family, the next step 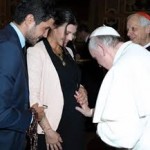 Pope Francis and the family – it’s time for clarification. April 15 was the deadline given to dioceses to return the questionnaire to the General Secretariat of the Synod of Bishops in preparation for the up-coming Synod. Then, beginning on April 15, Pope Francis dedicated his address in two consecutive general audiences to the complementarity between man and woman. In his speeches, Pope Francis defended the traditional family, and attacked gender ideology, emphasizing that “difference is the solution, it is not the problem.”

Those who believed that Pope Francis’ pastoral revolution presaged a doctrinal change in terms of marriage and family heaved a sigh of relief upon hearing his latest words. As far as family issues are concerned, it turns out that Pope Francis adheres to traditional Church teaching. His push toward a more pastoral approach does not necessarily mean he is going to water down doctrine, as was commonly thought. It now seems that those who were claiming the Pope’s support for such changes were probably trying to manipulate him.

It seems to be the fate of this papacy to be romanticized and mystified in some ways. Yet more in-depth analysis reveals that the truth about it is more trivial, and it is found in Pope Francis’ biography. The man who came “from the end of the world” was never fond of the Roman Curia, and probably saw in it a reflection of the Jesuits’ General Curia that isolated him for a decade, before Cardinal Antonio Quarracino, Archbishop of Buenos Aires, plucked him from peripheries and promoted him as his auxiliary bishop.

Viewed from the peripheries, the Roman Curia can seem a place of illicit dealings and general dysfunction. This is how the media depict it, wishing to draw attention to the Church’s shadowy side. It is seen this way, too, by some of the non-Italian clerics who, upon entering the curial ranks, have to work hard to understand mechanisms and languages so different from those they left behind. And so, too, local bishops view the Roman Curia in a negative light, barely able as they are to stand what they consider to be interference in the form of appointments and decisions made by Rome.

From the perspective of the peripheries, the Curia seems like a medieval relic that can definitely be abolished, unnecessary as it is for the Church’s mission. Paradoxically, it is only by living within this institution that one can understand how it guarantees freedom for the Church.

Little by little Pope Francis has understood this point, as this anecdote may show. The new Italian President went to the Vatican for a state visit on April 18. The protocol for such a visit – which is also the legacy of historical relations between the Holy See and Italy – includes an exchange of public speeches, and requires that both the Pope and the President wear their designated official attire for state occasions.

According to a source, Pope Francis did not want the full ceremony to take place. He would have had to wear the red “mozzetta,” but he has not done so from the first day of his pontificate, nor does he do so when the occasion calls for it, as during the New Year’s reception of ambassadors accredited to the Holy See. The Italian President agreed not to wear his official dress, but his entourage asked that the protocol for a state visit, even one simplified in accord with Pope Francis’ style, should, however, be observed.

Pressured somewhat by the recommendations of his diplomatic consultants, the Pope had to agree. Nevertheless, after the meeting, he became aware that by observing the proper protocol for a state visit he was able to address the Italian nation directly, whereas if only a private meeting had taken place between himself and the President, it would have remained confidential, and the details would not have been disclosed. So in the end the Pope understood that the full ceremony of a state visit allowed him to communicate directly and fully a message that otherwise would have been truncated within the confines of a cold communiqué agreed to with the Italian State press office.

This anecdote does not mean that Pope Francis will always agree to perform his official role in the traditional way. Yet it is the latest signal that the Pope’s “revolution” has step by step reverted back into something more established. Those who had pushed for the revolution are very much aware of this fact.

On April 13, Cardinal Oscar Andrés Rodriguez Maradiaga, Coordinator of the Council of Cardinals, presented in Rome a new series of books on Pope Francis. In a short meeting with journalists after the presentation, the Cardinal spoke about the ongoing reforms, and about how they are being carried forward. One question concerned the Institute for Religious Works (IOR), the so-called ‘Vatican Bank’, which was not part of the discussions at the recent meeting. Cardinal Rodriguez Maradiaga replied that everything went well, that the reform was moving along. When someone observed aloud that he was among those who had wanted to abolish the IOR, he turned stone cold. Then he explained: “We understood that abolishing the Institute would have damaged Religious Congregations who would have sustained a financial loss. So we agreed that it was better to heal a sick person than to resurrect a dead one.”

Cardinal Rodriguez’s words nailed the coffin shut on proposals to dismantle the Roman Curia that had begun circulating immediately following Pope Francis’ election. Prior to the last meeting of the Council of Cardinals, Cardinal Rodriguez went to Madrid and took part in a round table with Spanish journalists organized by the weekly ‘Vida Nueva’. One of the questions asked was about the synod. The Cardinal explained that the synod’s method is that of “observing, judging and acting,” and that this method may also lead to a decision to add a third leg to the synod. “We do not know if at the end of the coming October synod, the process will end, or the Pope will convoke a third synod. This could be the case, because the synod deals with very important issues…”

But even these words show that the hoped for doctrinal revolution is stalled. As bishops’ conferences from all over the world are electing their representatives to the upcoming synod, it becomes clearer that the conservative line will be upheld by a wide majority of the participants. None of the bishops is against a pastoral approach; often such an approach is already underway in the Church. But none of the bishops wants to denature the Church’s teaching in favor of a major pastoral innovation.

Seemingly, Pope Francis does not want to do so either. His last two general audiences, dedicated to gender and to complementarity between man and woman, are but additions to the many similar pronouncements he has already made – for example, when in the Philippines he warned about the ideological colonization of family. Pope Francis’ words on gender are on track with the anthropological struggle that the Church is fighting. As the President of the John Paul II Pontifical Institute on Marriage and Family, Msgr. Livio Melina, put it, “man is not an isolated individual, he lives in a network of family relationships, his essence is to be a family. Inside these relations he is free, he defends his truth. When he is outside of this relationship he is simply an individual manipulated by powers, which grant him the hedonistic pleasure of sexuality, but which do not grant him to love truly and to be bound by love. In this reduction of man to sexuality, these powers can control the person. Even [the Marxist sociologist Herbert] Marcuse is aware of this reduction of human sexuality in order to control man.”

This is the huge struggle being fought within the synod’s debate on the family. This struggle is even wider than what the media report, and goes beyond the issues of the divorced and remarried as well as that of pastoral care for homosexuals.

Now is the time for Pope Francis to carry these issues into the international arena. And on these issues he will achieve consensus. It was while addressing the European Parliament in Strasbourg about the family that he earned the most sustained applause. He will certainly speak about the family before the United Nations General Assembly on September 25.

Now that Pope Francis seems to have become aware of the importance of Church’s institutional component in fighting this battle, perspectives on his pontificate will obviously broaden. Perhaps curial reform, as well as the much vaunted doctrinal revolution, will find their proper place in this discussion. But this will be not the ‘core issue’. It will just be a path toward better functionality, one made within a wider vision and concept of mission.

6 Responses to Pope Francis and the family, the next step