Pope Francis, what to expect Fratelli tutti: likes and dislikes of the encyclical of Pope Francis

Pope Francis and the institutional issue 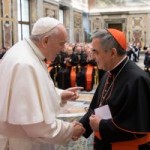 We do not officially know the reason for Cardinal Angelo Becciu’s decision to renounce to his title of Cardinal and resign from the Congregation for the Cause of Saints. One could initially guess that the resignation is related to the acquisition of a luxury real estate property in London by the Vatican Secretariat of State – the purchase is still under investigation, and is yet to be determined if a judicial process will take place. Cardinal Becciu made it later clear that the Pope believed that he did embezzlement. However, no official communication of the Hoy See about the reason came out.

If linked to mismanagement, Cardinal Becciu’s resignation is not just about a financial scandal. Moreover, it is part of a broader, troubling institutional framework.

However, there were many problematic issues related to this investigation. First, the Vatican police have no jurisdiction over the Apostolic Palace. So the search and seizures put at risk the balance of powers between the Holy See and the Vatican City State.

Another issue regards the seizures from the AIF search. The Vatican police seized documents that are part of exchanges with foreign financial intelligence units. The Egmont Group, which gathers some 150 financial intelligence units from all over the world, protested and pulled the Vatican off its internal electronic network temporarily. The Pope was annoyed by this. Good relations were restored only after the AIF and the Vatican tribunal signed a memorandum of understanding.

Cardinal Becciu’s resignation opens another issue. We can imagine that Pope Francis pushed the cardinal to render his resignation, or at least this is what Becciu told. This leads to a broader point: what is the cardinalate?

Being a cardinal is a distinction, and we may thus look at the cardinalate as a function. It is not like the episcopate: one is ordained bishop forever. There have been numerous cases of loss of the red birretta for several reasons, also for mismanagement.

During the last decades, there was a trend to give the cardinalate a more spiritual value. Becciu’s resignation makes the cardinalate more temporal again, considering it a mere administrative function.

The resignation leaves a message in people’s subconscious: nothing is sacred anymore; nothing has an immutable dignity. A cardinal can (must) return the red birretta and stop being a Cardinal if he is questioned over management.

Becciu’s resignation has one recent precedent: Cardinal Keith O’Brien’s. Alleged of abuse and for this reason prevented from participating in the 2013 Conclave, Cardinal O’Brien lost every cardinal dignity in 2015, though retaining the option to don the red birretta. No more consistories, no more membership in Vatican congregations, no more eligibility to elect the Pope in a conclave.

What is the cardinalate then? How must it be interpreted? That Cardinal Becciu had to resign without having the opportunity to stand in a trial show a certain arbitrariness. This arbitrariness is applied to all of those investigated in the latest financial scandals: none of them has been tried yet.

The mere fact that the cardinalate distinction can be withdrawn, with no trial, undermines its spiritual dimension. Rather than a distinction given to someone for some particular merit, the cardinalate can be interpreted as a representation function. Paradoxically, this is what Pope Francis wanted to avoid.

Since the beginning of the pontificate, Pope Francis created new cardinals escaping the old logic of the “cardinalatial position.” No dioceses or position can serve as a careerism steppingstone under Pope Francis.

However, Pope Francis himself, centralizing decision making, applied the criteria of continental representation in creating new cardinals. There are no general criteria, only his sovereign decision.

The Pope has these prerogatives. He can decide and do everything he wants without asking for any recommendation, changing the laws, and making decisions that set the rules aside.

It is, however, striking that this is the case. Pope Francis made of synodality and collegiality two keywords of his pontificate. Becciu’s resignation does not show us only an institutional crisis. It portrays an isolated Pope who feels betrayed by his own collaborators and tries to solve the situation ad hoc.

Pope Francis wants to fight the cancer of corruption by applying zero tolerance. It is a commendable initiative. However, this initiative is sometimes carried forward outside the framework of the institution that the Pope represents. The Pope then gives the impression that nothing in the institution is more important than its boss.

4 Responses to Pope Francis and the institutional issue