Between the End of the Old World and the Beginning of a New One: Benedict XVI’s reflections Pope Francis: Diplomacy and the Role of Religions

Pope Francis and the Issues of Ideological Colonization 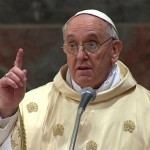 Last weekend 106 papal nuncios came to Rome to celebrate the Jubilee. During three days of meetings and conferences, the Pope’s ambassadors discussed the Church of Francis, but also Islam and gender. The presence of “gender ideology” among the hot topics of papal diplomacy shows how sensitive the issue is today, even in Pope Francis’s Church.

Pope Francis has not avoided describing gender ideology as “demonic,” nor expressing several times his concerns over the issue. The last time he did so was in Poland, during his private meeting with the Polish bishops, the content of which was later revealed by the Holy See Press Office.

Despite the fact that the issue of gender ideology is always evident in Pope Francis’s teaching, and despite the fact that even bishops often tackle the issue, this Pope is surprisingly never mentioned as one of the most conscientious and outspoken among recent popes on this topic. At the same time, against the threat posed by gender ideology, the Church’s best intellectual forces are fully engaged.

A few days before the Jubilee celebration for nuncios, the Italian Biblical Association gathered and discussed complementarity between men and women. The pervasiveness of gender ideology was also a leit-motiv of the discussions at the two synods on the family – a discussion that became particularly lively when the 2014 Synod’s mid-term report seemingly provided an opening to gay couples.

The issue was also mentioned by Pope Francis in his two speeches to the European Parliament and to the Council of Europe in Strasbourg. Those speeches were filled with references to the dignity of human life and to family issues, though only social issues were made widely known to the public by the media – while the same choice to exclude life issues was shown in the EU Parliament official press release.

These questions are food for thought as international events provide further details. A series of leaks – the so called DC Leaks – revealed that the businessman, George Soros, contributed significant amounts of money from his “Open Society Foundation” in order to “switch the American Catholic Church’s priorities” from life and family issues to social justice issues.

According to DC Leaks, in April, 2015, Open Society transferred the amount of $650,000 to PICO and Faith in Public Life, two progressive organizations. The money was donated with the aim of organizing publicity campaigns to support economic and social justice, in order to create a critical mass of US bishops aligned with the Pope. The documents also reveal that the two organizations were chosen since they were involved in long-term projects aiming to change “the priorities of the US Catholic Church.”

How much they succeeded is yet to be seen. The reports show that the Catholic Church is considered by Soros just as one among other secular institutions, in step with his strategy to exploit religions – a strategy that poses as one of the biggest adversaries of faith.

This is not the first time the Church’s teaching has been publicly challenged. Ever since public opinion has made an impact in society, the Church has been challenged and her teaching misrepresented. In this way, a public opinion generally hostile to Catholic ideas was generated, based on the rationale that religious teachings were just relics of superstition and backwardness.

Of this hostility, the Second Vatican Council is the most evident proof. Without regard for what was actually discussed within the Council, the media took sides, supporting positions here and there, and pushing for a change that not even progressives inside the Council were supporting, as Benedict XVI candidly explained in his recent book-length interview.

After the Second Vatican Council, it was the turn of the encyclical, “Humanae Vitae,” that is, of the protracted study on contraception, begun under St. John XXIII and carried forward under Blessed Paul VI, who wrote and published the final draft. As the preliminary study was long, and two commissions were formed to discuss it, media pressures reached extremes. The conclusions of the final draft were anticipated, some of the opinions of the committee were leaked while the media created an image of a Pope (Paul VI) committed to opposing modernity – a modernity the Church could not stand against.

Things did not change under John Paul II, who was strongly criticized from the first years of his pontificate. But then pressures from public opinion changed during John Paul II’s pontificate, as the world had changed and Catholic teaching had already been brushed aside in everyday life. However, the Polish Pope spoke out loudly, while the Holy See remained the last rampart defending human dignity.

The Eighties saw the climax of work behind the scenes to undermine the foundations of the human being: abortion was more accepted and included in national legislation, while the euthanasia campaign was subtly initiated. Human rights came to be thought of as individual rights, a shift that undermined the concept of family – never before was the nature of the family the subject of debate.

And the nature of the family continues to be questioned today in the name of everyone’s right to have children. The step from in-vitro fertilization to surrogacy is shorter than imagined. Surrogacy not only makes the human being a commodity to be sold, it makes room for a further step that is ideologically devastating: sex must be considered completely fluid, and not defined by nature but by social construction.

This is the reason why gender ideology is a main part of this long-term strategy. During the 90s, this fight was opened at the United Nations, which sponsored a series of conferences from the 1992 Rio Summit on Environment to the 1996 Rome Summit on Food. On one side were the US and the European Union, on the other side the Holy See, accompanied by many developing countries, victims of this neo-colonialism. It is undeniable that gender strategy has come a long way since the 90s, but the Holy See has been successful at least in slowing down the advance of this strategy.

And the Church is still the rampart. Despite efforts to include Pope Francis on the side of those favoring gender ideology (sometimes with success), the Holy See has never renounced the struggle for human dignity.

It is not, in the end, just a matter of ideology, and to understand this we should widen our gaze. Item: public opinion is being increasingly manipulated to favor the destruction of the natural family. Item: forces outside of the Church have tried to destroy the Church as a moral force (it is enough to remember the very difficult season of attacks on the Church over clerical pedophilia). Item: those same forces are now trying to divert the Church’s attention from human life issues to social justice issues, the packaging of which is devoid of any religious beliefs. Hence, the roots of this ideological struggle are even more interesting and deserve close scrutiny.

As already documented, individual rights and the ideological efforts to support them are first born and valued in Europe and then exported to developing countries. Yes, the United States is the economic power, but Europe still plays a leading intellectual role.

Yet, Europe itself is ideologically divided, as is demonstrated by a recent book published by Georgetown University Press, “Religion and the Struggle of the European Union.” The authors of the book point out that the founders of the new Europe were Catholics, imbued with the Catholic communitarian view of life. They thought about a Union for the common good, in which every State relinquished a part of its sovereignty in order to establish a community of values and intentions aimed at improving human conditions in Europe. This is the Spirit of the Treaty of Rome.

At the same time, there is another creed in Europe: community rights are less significant than individual rights, and individual conscience has a primacy. This force is Protestantism, and its beliefs were at the roots of the second of the EU foundations: a financial union, characterized by individual rights for people living within their States, with no interest in establishing a real community.

In the end, Europe is experiencing a fight between its Catholic and Protestant worlds. The Protestant ethic in the end is the Church’s sworn enemy, and it was the Protestant ethic that created the kind of ideological colonization about which Pope Francis is always issuing warnings.

Many of the discussions within the wealthy German Church are apparently informed by the idea that the faithful must be given their freedom so that they remain attached to the Church, and that the final aim of Church policy is apparently that of not losing the very taxpayers who endow the Church’s structures with enormous wealth. Thanks to these taxes, the German Church can undertake her charitable works. But the German Church can also exert a strong influence on the bishops’ conferences of developing countries, which depend completely on outside funding, most frequently from the German bishops.

Individual freedoms are thus imposed in the name of a faithless economic force. To contrast this procedure, a less worldly approach is needed: Benedict XVI asked for it, and he is even highly critical of the way the German Church collects taxes – in his last book, he finally accused the German Church for being functionalist. Pope Francis is also a convinced supporter of a less worldly Church.

The issue of gender ideology is etched at the base of the Church’s fight to stay Catholic and not to concede anything to Protestantization, while also aware of the fact that a Protestant would simply accept gender ideology in the name of everyone’s individual freedom to be whatever he wants. This freedom must be paid for: in the name of incomes, some people are willing to put their belief to one side; because of poverty, other people are obliged to do so. This is also the reason why the Church (and the Holy See) must have financial independence: so as not to depend on donations from those who use donations to ask for a change of identity.

This is another reason why gender ideology has become such a crucial issue. And this is the final reason why the world still does not know this.

Tagged with: gender ideology • Pope Francis and gender • Protestantization of the Church