Pope Francis: What Will the Next Year Be Like? Why did Pope Francis criticize the 1968 movement in his speech to diplomats?

Pope Francis and the Need for Non-polarized Communication 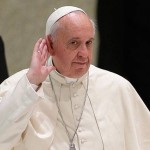 The theme of the World Day for Social Communication 2018 is “The truth will set you free (Jn 8:32): Fake news and journalism for peace.” It is a crucial topic as the great reform of Vatican communications is to take final shape. Above all, it is a crucial theme for the upcoming year, one that is not foreseen as simple where communication is concerned.

Proof that this phenomenon exists around the Vatican is the fake news of the death of Pope Emeritus Benedict XVI, spread through a fake twitter account of Archbishop Luis Ladaria Ferrer, Prefect of the Congregation for the Doctrine of the Faith. The account was promptly closed down. It was activated the day before the announcement, presumably with the sole task of delivering this fake news. Some days before, a fake twitter account for Cardinal Oscar Andrés Rodriguez Maradiaga was opened.

During its short life, the fake account of Archbishop Ladaria announced that it was a fake account opened by the journalist Tommaso Debenedetti. The name of Debenedetti alone made everything clear.

Debenedetti is famous in the world as a hoax creator, a performer of fake interviews and fake news. It the beginning he worked in a very limited context, selling to local and small newspapers the interviews that some writers “granted” him in Italian and Spanish. In the era of digital information, he specialized in creating fake – but well-constructed – twitter accounts. The news he spread via these fake accounts had concrete consequences. The fake news of the death of Syrian President Bashir Assad skyrocketed oil prices.

However, it is not important whether or not Debenedetti was the creator of Archbishop Ladaria’s and Cardinal Rodriguez Maradiaga’s twitter accounts. The character of Debenedetti is useful to understand the theory behind spreading fake news. Debenedetti’s hoaxes are based on the principle that no one will verify the news as long as it is juicy.

What does this story tell us in the end? It tell us that behind the fabrication of news, research is undertaken to make it plausible and juicy. The fake news of Benedict XVI’s death, for example, is the end of a path: the author of the hoax identified a possible conflict, and this conflict became very concrete when the concern for the terms of the “institutional death” of an emeritus pope was raised. The fake news was born in this climate, with the result of the diffusion of a story that many are fearing, while many are waiting to hear.

Even the mere fact that Cardinal Rodriguez Maradiaga had opened a twitter account was juicy. It was considered a consequence of the allegations against the Cardinal over the mismanagement of funds from the Honduras Catholic University, and interpreted as part of the Cardinal’s counterattacks. The Cardinal also received a phone call of support from Pope Francis.

The question that lies beneath these events is even bigger: can media influence the Holy See? Or, even better, is the Holy See able to resist to the pressures of media?

The question is not trivial. The two Vatileaks trials, for example, showed a clear attempt to attack the Holy See’s sovereignty by leaking documents in order to turn public opinion against the Catholic Church on account of allegedly excessive worldliness and financial mismanagement.

Even clerical sex abuse has been used as a tool to set public opinion against the Church. If it is true that a single occasion of abuse is too much, and that those who are guilty of it must be punished, it is also true that the social panic generated by a list of abuses (many of them alleged, but not proven) is used to attack the Church’s integrity, even when the allegations are not credible.

These issues have been used in order to ask the Church to change its doctrine. It happened, for example, when the Holy See / Vatican City State were called upon to report in front of a United Nations’ committee on how the Convention for the Rights of the Child were being applied – a report that was part of the regular procedure of the Convention. The committee of experts went far beyond its competence, to the point that it also suggested changes in Canon Law – something which has nothing to do with the Vatican’s or the Holy See’s jurisdiction as a State – and describing the confessional as occasioning a dangerous “a code of silence”.

Examples can be dated back further in time, at least to the 2013 pre-conclave period. That time the abuse scandal involved Cardinal Keith O’Brien, Archbishop of St Andrews and Edinburgh, who was later excluded by the conclave, but also Cardinal Roger Mahony, Archbishop Emeritus of Los Angeles, who was the object of a media campaign aimed at excluding him from the conclave. Other pressures came from news reports that speculated on a Vatileaks secret dossier, and on how Vatileaks had an impact on Pope Benedict XVI’s decision to resign.

This was the reason that the Vatican Secretariat of State, on February 23, 2013, issued a statement which is still current nowadays.

“In the course of the centuries,” the statement read, “Cardinals had to face many different forms of pressures, directed against individual Cardinals as well as toward the entire College of Cardinals, with the aim of conditioning their decisions, influencing them to political or worldly ways of reasoning.”

The statement added that “if, in the past, the so-called powers, that is, States, tried to condition the Pope’s election, today public opinion is used, often on the basis of evaluations that do not comprehend the typically spiritual moment in which the Church is living.”

For this reason, it was “regrettable that, as the beginning of the Conclave approaches and voting Cardinals will be called to express in full freedom their choice, standing on their conscience and in front of God, news that is often not fact-checked and does not even have the possibility of being fact-checked, along with even false reports are being spread, causing a grave danger to people and institutions.”

Vatican communications are called upon to face these pressures. Such pressures do not simply consist of frontal attacks against the Catholic Church. There are many other, more subtle, tactics. For example, the debates between conservatives and progressives have been over-emphasized: this debate seemed to be a relic of the past, but it once against became powerfully topical under Pope Francis – so much that every debate is depicted by the secular press as being fundamentally “pro” or “contra” Pope Francis, while at the same time, the Pope’s decisions are used by the media to create an opposition between Francis and his collaborators.

So, Cardinal Gerhard Mueller, who was not reconfirmed by the Pope as Prefect of the Congregation for the Doctrine of the Faith, still had to reiterate his loyalty to the Pope in a long interview with the German newspaper “Die Zeit”. Among the questions was also one concerning the reason the Pope did not confirm him as Prefect.

Another example: a book critical of Pope Benedict XVI’s theology is not used as a point of departure for a theological discussion, but rather as a tool to show that critics of Pope Francis are pre-conciliar theologians who also attack the Pope Emeritus.

We can glimpse in these media moves a need to create oppositions. This is the reason that Benedict XVI has been used by numerous parties as a tool either to attack Pope Francis, or to support him, in situations that place the Pope Emeritus at the center of a debate in which he never wanted to take part.

Another thing must be noted: this discussion within the Church is framed by the media as a political debate, with a majority group set out against an opposition party, along with the accusation of censorship of ideas.

Is this political language employed by the media really a language appropriate to the Catholic Church? Does this continuous depiction of opposed factions really help the Church?

Cardinal Giuseppe Betori, Archbishop of Florence, explained at the end of 2012 Synod that the its final report did not publish the points where there was no consensus (that is, the consensus of two-thirds of the Synod Fathers) since “the Synod does not aim at having a majority and an opposition” but rather “to generate communion.”

For this reason, Vatican communications cannot follow the oppositions created by the secular media and address any question with the same secular arguments of those who seek to lobby the Church. Vatican communications are called to go beyond, toward a general outlook that helps every point of view to take part in the discussion – to seek for a unity that is not uniformity, in Pope Francis’s words.

This is the big challenge, in a year that will be full of media pressures. Perhaps today more than ever.