Pope Francis and the new course of Vatican communication 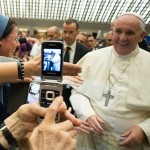 Greg Burke and Paloma Garcia Ovejero’s decision to resign as director and deputy director of the Holy See Press Office marks the beginning of a new course for Vatican communication under Pope Francis.

Paolo Ruffini, prefect of the Dicastery for Communication, released a statement along with the announcements of the resignations. The statement must be read with care, as it can convey implied messages, as it happened with the statement Ruffini released when the appointment of Andrea Tornielli as editorial director of the Dicastery of Communication and Andrea Monda as editor of L’Osservatore Romano was announced.

Ruffini said that he “learned about Greg Burke and Paloma Garcia Ovejero’s decision,” and added that this had been “their autonomous and free choice,” and stressed that – as Burke and Garcia themselves had said– the Vatican media reform required a quick handover in positions.

This latter is a reference to a Greg Burke’s tweet, that said that he and Garcia “at this time of transition of Vatican communication, think it’s best the Holy Father is completely free to assemble a new team”.

In order to avoid mounting speculations, in the evening of Dec. 31, Burke also stressed in a tweet that “just so you know, we had been praying about this decision for months, and we’re very much at peace with it”. These words were to dismiss any speculation that the resignation came in protest against the new management of the Dicastery for Communication.

Even though there were no tensions, it was obvious that a new board needed new people, though the reshuffle was not supposed to be immediate, as Ruffini stressed in the statement on Tornielli and Monda’s appointments.

That a change of the guard was to be expected can be glimpsed in what the prefect of the Dicastery for Communication noted in connection with his latest statement: Burke and Garcia were identified for their positions by his predecessor, Msgr. Dario Edoardo Viganò.

What has changed in the past few months? After the so called “lettergate” scandal – that is, Msgr. Viganò’s handling of a personal letter by Pope emeritus Benedict XVI written as a response to the request of a foreword for a series of books on Pope Francis’ theological thought – Msgr. Dario Edoardo Viganò himself resigned as prefect, and the post stayed vacant.

Msgr. Lucio Ruiz, secretary of the Dicastery for Communication, initially took the interim direction, while Msgr. Viganò stayed in the dicastery as an assessor. Both Viganò and Ruiz are still respectively number 2 and 3 of the dicastery.

The interim term given to Ruiz seemed to indicate a transition in continuity. In the end, the appointment of Msgr. Viganò as prefect of the Dicastery – then Secretariat – was already a discontinuity. The appointment came following the establishment of the commission called to study and rewrite the Vatican media reform as designed by the first committee established for that, the committee chaired by Lord Christopher Patten.

It was then thought that Msgr. Ruiz interim term was going to turn into a permanent position, or that the new head of the dicastery was going to be a high profile ecclesiastical figure, like for example Bishop Paul Tighe, adjunct secretary of the Pontifical Council for Culture. Formerly secretary of the Pontifical Council for Social Communication, Bishop Tighe was a member both of the Patten Committee and of the successor commission.

It was not this way, and again a discontinuity choice was made. Paolo Ruffini, a skilled professional, was appointed to the helm of the dicastery. Ruffini was the director of TV2000 – the Italian Bishops Conference television – and before that was a journalist and manager in the Italian State television station.

Ruffini was appointed at the eve of the 2018 Synod, and marked the beginning of a new course. The first phase of the Secretariat of Communication was marked by a marketing oriented approach, rather than information. Now, in this phase, it seems that journalism will become pivotal again, with the appointment of the long term “vaticanista” Tornielli as editorial director.

It must be seen, now, how the communicative approach will be, once the ranks of the Holy See Press Office are filled.

Some clues of this evolution might be glimpsed in Burke’s resignation. Burke joined the Vatican in 2012 as advisor for communication of the Vatican Secretariat of State, while the first Vatileaks was mounting. He was then assigned to the Holy See Press Office, as deputy director and then as director.

But the Secretariat of State composition has changed in these six years. The then assessor Msgr. Peter Wells, who sponsored Greg Burke’s appointment, is now nuncio to South Africa, while the deputy Angelo Becciu was promoted prefect of the Congregation for the Cause of Saints and was created cardinal.

The change of the guard in the communication area comes, then, at a time of general reshuffling. There will be many other transfers, also internal ones, to look at in 2019.

This change of the guard also coincides with a possible change of paradigm in Holy See communication. This shift might be glimpsed in a passage of Pope Francis’ last Christmas speech to the Curia, delivered on Dec. 21.

Speaking about the sex abuse by clergy scandal, Pope Francis noted that “in discussing this scourge, some within the Church take to task certain communications professionals, accusing them of ignoring the overwhelming majority of cases of abuse that are not committed by clergy – the statistics speak of more than 95% – and accusing them of intentionally wanting to give the false impression that this evil affects the Catholic Church alone”.

But the Pope added that it was rather important to “give heartfelt thanks to those media professionals who were honest and objective and sought to unmask these predators and to make their victims’ voices heard. Even if it were to involve a single case of abuse (something itself monstrous), the Church asks that people not be silent but bring it objectively to light, since the greater scandal in this matter is that of cloaking the truth”.

Although he only referred to the abuse scandals, Pope Francis passage can be applied to many other issues. For example, the Vatileaks scandal. Was the scandal – sometimes, overstated – the key and most important issue? Or was the fact that somebody stole or used confidential documents to reveal the alleged scandal, the most critical issue?

Following this rationale, the Vatileaks trial should have never been held, and in the end the final judgment of the trial did not apparently take into consideration the improper way the defendants accessed confidential e-mails and documents.

Pope Francis’ words seem aimed at building a bridge, an alliance with the secular media and world to help the Church to get out of the scandals. But his comments also apparently underestimate that, in many cases, scandals are actually used to attack the Church. Sometimes the scandals are overemphasized, sometimes they are part of more complex struggles that are aimed at undermining the Holy See sovereignty.

So, Pope Francis’ words bear the risk that they will lead to a defense of the Pope and the Pope’s works while marginalizing the institution. It is a specific risk. Even the first “testimony” by Archbishop Carlo Maria Viganò asking for the Pope’s resignation questioned the Papacy, and not only the Pope.

It is yet to be seen how the new course of Holy See communication will solve the dilemma. If, in the end, communication will be focused only on present issues, or if it will have a more global design, with historical roots, in order to preserve the institution.

Certainly, Greg Burke and Paloma Garcia Ovejero’s resignations open a door to a change in narrative. For the sake of the Church, one cannot but wish success and all the best to those committed to this task.