Pope Francis and the question of the Order of Malta 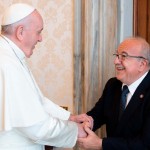 What is taking place these days around the Order of Malta is not just a power struggle, nor does it concern only the issue of the Order of Malta’s sovereignty being at risk. The situation also says a lot about how Pope Francis conceives his power, the way he views the Holy See, and his ability or not to mediate between spheres, necessary to carry out a reform of that kind.

To understand the question, one must take a step back in time. The crisis in the Order of Malta began in 2016 when the Grand Master Fra ‘Matthew Festing asked Grand Chancellor Albrecht Boeselager to resign, and when he refused, he asked him to do so as an act of obedience. The reason for the request was a scandal over the distribution of condoms by some associations of the Order in Myanmar – a question which, among other things, was resolved at the time of the defenestration. Some knights who considered the decision a constitutional break appealed to the Pope. The Pope, in turn, appointed a commission of inquiry. It suggested to the Pope, among other things, to ask Fra ‘Festing to resign, because as Grand Master, he violated the Constitution. The Pope asks him to do so. Fra ‘Festing obeys. All of his latest decisions, including the appointment of an interim Grand Chancellor, are overturned.

There were various topics to be dealt with. The question, first of all, of the requisite of nobility to be able to be appointed Grand Master, very difficult to find in a necessary generational change. Then, the distribution of government posts, and the role of associations.

Thus, a long reform process begins, with consultations among all the knights. In 2020, things changed. The Grand Master Dalla Torre dies, and, after a short interim, Fra ‘Marco Luzzago is appointed as Lieutenant of the Grand Master. When Fra ‘Luzzago’s term in office is about to end (the Lieutenant serves for a year) Pope Francis takes matters into his own hands. He gives the pontifical delegate, who has become Cardinal Silvano Maria Tomasi, full powers to reform the Constitution. He confirmed Fra ‘Marco Luzzago as Lieutenant of the Grand Master, a decision which should have been taken by a Full Council that would have elected him. And he takes over the reins of the reform.

Tomasi, with a working group, develops a constitutional reform. The first draft of the reform provides for the Order of Malta to be considered a “subject to the Holy See.” This, the knights say, jeopardizes the sovereignty of the Order of Malta, which would thus be reduced to an association of religious under the Holy See.

The issue of sovereignty is addressed in the last part of the Lieutenant’s speech at the beginning of the year to the Diplomatic Corps and leads to a heated internal debate.

Cardinal Tomasi has a small working group working on the draft, and those who can see it underline the risks. Boeselager first made it known that he would not participate in the meeting of the enlarged group, highlighting what he considers the criticalities of the draft and also his difficulty in managing the situation amid external pressures – he is, however, considered the culprit of the crisis – and his commitments of government. But Cardinal Tomasi rejected the appointment of Boeselager’s replacement, made by the Lieutenant of the Grand Master, and asks everyone to step back, continuing the dialogue on reforms.

In a nutshell, this is more or less what has happened so far. But what are the themes of this story?

First of all, that of the sovereignty of the Order of Malta. The basis for sovereignty is in the 1313 bull of Pasquale II, which made the hospital a lay monastic order, giving the Knights total independence. For a while, they also managed territories (Rhodes and Malta), but the fact remains that their sovereignty stems from a concession from the Holy See. Being a monastic order, they are subject to the Pope. However, as a unique institution, they have a patron and not a Pope’s ambassador, although they have an embassy to the Holy See.

Therefore, the sovereignty issue is closely linked to the religious character of the Order, and submission to the Holy See gives it the sacred character. The Pope bases his intervention on this, the request for obedience to Fra ‘Festing in his resignation, and now the imposition of a delegate to make the reforms.

However, the Order of Malta claims to be a state without a territory, with a government, which the Holy See cannot touch. The fear of appearing as a subject to the Holy See is precisely that of losing state status and, therefore, losing the right to active and passive legation. This is what the members of the Order are defending.

Cardinal Tomasi said that there have been modifications in the charter, that the passage that described the Order of Malta as “subject to the Holy See” is gone, and Boeslager wrote in a circular letter that he felt now optimistic, having clarified the positions. However, the path forward is still long, and the reforming process will not be an easy task, as some also rumor the risk of a schism of the associations from the Order.

Perhaps it would be appropriate to find a formula through mediation, a way in which the nature of the Order of Malta is explained while maintaining the special bond with the Pope and preserving the character that allows the Order of Malta to have diplomatic relations, decisive for carrying out its humanitarian activities.

But, and this is the point, the Pope does not want to go towards mediation. He interprets the Order of Malta as he interprets the Holy See, that is, primarily as pastoral activity. Papal diplomacy itself has often been considered secondary to pastoral care during the years of Pope Francis. On dossiers such as China, Russia, and South Sudan, the Pope has usually prioritized the question of the pastoral presence (and therefore of his presence) over diplomatic considerations that required greater prudence.

In practice, for the Pope, the Holy See exists to do humanitarian work, and so does the Order of Malta. By treating the Order of Malta as an NGO, there is also the risk of seeing the Holy See treated as an NGO. It is a theme that should not be underestimated in this historical moment. There is a trial in the Vatican that has highlighted how the Pope uses all the possibilities of the absolute monarchy by changing the rules as it moves along, placing Vatican City State considerations well above those of the Holy See. And the pressures to consider the Holy See not a State, but an organization, are mounting on the sex abuse cases in order to hold it responsible for not exercising appropriate supervision. The Pope, in the end, would be treated like the CEO of a company that failed to oversee its employees. Is this where we want to end to promote pastoral activity?

Therefore, the question of the Order of Malta is a reflection of many other issues that directly concern the Holy See. That of a sovereignty never so highly threatened and questioned, not even when the campaigns against the Holy See were blatant. That of diplomacy, never so forced to fall second to pastoral care, with which it has traditionally always worked – diplomacy has always served to protect missionaries, working for the primordial right, religious freedom. That of a Pope who is not afraid to act like a Pope-king, even giving the impression of subduing states without seeking balance – e.g. the Vaticanization of the Holy See now on going with the Pope’s intervention in a Vatican trial. It is the principle of “good violence,” which Pope Francis had already defined when he met the plenary of the Dicastery of Communication in 2017.

Finally, there is a prejudice by the Pope against all knightly and nobility associations, always considered a bit like relics of the past and places of great privilege. With the Order of Malta, the Pope had previous experiences in Argentina.

It is a prejudice that does not help, and that in this situation has also sharpened in the face of many errors – tactical, procedural, legal – that have been made by the knights themselves over the years.

Why did Boeslager go back to being Grand Chancellor, instead of resigning, after the Pope had canceled all the decisions taken by Fra ‘Festing? And why, after announcing that he would not participate in the meeting of the working group, did he not protest against Tomasi’s decision regarding the working group, and instead participated, actually accepting the decision?

These questions remain open, just as the discussion on the future of the Order remains open, which can turn out to be a debate about the future of the Holy See. Until now, the Holy See has recognized the Order as a “special category,” also accepting the double accreditation of ambassadors to the Holy See and the Order of Malta, even when they are resident in Rome (the Holy See does not accept dual accreditation with Italy). And this special status is recognized in the latest Constitutional Charter, still in force, which states that “the Order is subject to international law and exercises sovereign functions” and that “the legislative, executive and judicial functions are reserved to the competent bodies melitensi (of the Order of Malta, editor note), according to the provisions of the Constitutional Charter and the Code. ”

The Charter also defined unique relations with the Holy See. The Charter emphasizes that the Order is a “juridical person recognized by the Holy See” and that the religious of the Order are subordinate only to their superiors in the Order.

Now, the religious aspect takes over. If the new Charter emphasized that the Order itself is “subject to the Holy See,” it would create a sort of break with its previous constitutional charters. This is perhaps the reason for the change. However, if the Holy See begins (or attempts) to treat other institutions like NGOs, it is likely that it will be treated in the same way.