Christian plight, it is now time for a diplomacy of the truth Bishops, Pope Francis’ choices

Pope Francis and the reaffirmation that peace is possible. Following Pius XII tracks 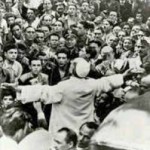 That Pope Francis wanted to proclaim Pius XII blessed is something that has been rumored in recent times. To speed up procedures, the Pope could use the «equipollent canonization,» a formula he already used six times since the beginning of the Pontificate. He might do it again. Pius XII’s file has been studied in depth, and Jesuits were in charge of it – a reason why Pope Francis could be particularly fond of this cause. And the aura of sanctity of Pius XII is broad and far reached, despite the polemics on his alleged failure to speak up against the Shoah during the Second World War. Pius XII should be re-evaluated not only because of his reputed sanctity, but also because he had the gift of prophecy. At a time when we seem to be living a «Third World War in bits» (Pope Francis’ words), re-reading Pope Pacelli speeches may show the Holy See a path to follow. It would also bring to focus some strategic diplomatic mistakes.

Under Pope Francis, diplomacy is not seemingly enjoying a simple life. Pope Francis has made of prayer his main diplomatic tool. On his flight back from South Korea, the Pope reiterated that the prayer for the peace in Middle East held in the Vatican gardens – which he promoted – had not taken place invain, despite the conflict broke in Gaza a little after this event. In South Korea, in addition to the appeal for the reconciliation between the two Koreas, he called on Asian countries that do not have diplomatic ties with the Holy See yet, to «start a dialogue among brothers,» since «Christian do not come as conquerors.»

The strategy with Asian countries seems to be that of a diplomacy of martyrs. Id est, not to just seek a diplomatic dialogue, but to show the beauty of Christianism through shining examples, to evagelize «through attraction.» The rest – the Pope thinks – will come after. For this reason, the cause for the beatification of the first North Korean martyrs has been unlocked. And there will soon be new martyrs from Laos, another of the seven Asian countries with no diplomatic ties with the Holy See.

Despite this strategy, at one point Pope Francis had to turn to a more interventionist diplomatic strategy. Always during the press conference in the place, he backed an intervention in Iraq to stop the aggressor. «I said: stop, not bomb,» he pointed out. And also he mentioned United Nations, reiterating the principle the Holy See has always followed in humanitarian issues. This principle states that there is the need for an international intervening force. States should not perpetuate a war, and should come together to stop them. This is the eternal debate on the just war, which led to the notion of humanitarian intervention. But the humanitarian intervention had to be done under the auspices of a multilateral organization, as the United Nations are. Is the United Nations an organization strong enough to support States? Is this gathering of nations an effective tool to help the common good? Does it have the necessary authority?

This is where Pius XII becomes current again. True, the Holy See has always promoted the commitment and the importance of the United Nations. But it has also always more insistently spoken about a needed reform of United Nations. In the midst of the dramatic humanitarian situation in Iraq, the United Nations seems to be among the bigger losers.

In the face of this humanitarian situation, diplomacy of truth has become the only possible way to build a diplomatic support to action. This is something that Pius XII had already foreste  in his Christmas radio message broadcasted in 1954.

That message is very much worth reading again, in its entirety. Among the Pius XII’s Christmas radio messages, only those the Pope delivered during the Second World War are now remembered. Those messages represent in the end a true social encyclical, and are the basis of the John XXIII encyclical Pacem in Terris and of the Second Vatican Council’s document dealing with the social teaching of the Church. No one remember of the 1954 message, delivered when the world was divided in blocks and peace was kept only because the rivals feared their mutual destruction. «The cold peace – Pope Pacelli wrote – is only a temporary calm, conditioned by a sense of fear that is subject to change.»

In that message, Pius XII condemend the notion of war as a political tool, subjected to the error of those who rule, as an «absurd and inmoral notion of war.» A notion that prevale and made the Pope’s effort to avoid war in 1939 futile. “Nothing is lost with peace. Everything can be lost with war” is a famous Pius XII’s maxim, which Pope Francis intentionally quoted often.

Pius XII went further. «Every effort or pacifist propaganda coming from those who profess no  faith in God is always very dubious and uncapable of mitigating or eliminating the anxious sense of fear.»

It is the faith in God that gives rise to the rational choice of not pursuing war, and to pursue living as brothers instead. Pius XII already foresaw the catastrophe in the making because of the merging of practical atheism, free market and consumerism. He wrote: «It is illusiory to believe that peace can be left  to the care of free market alone,» and «it would not be different in the future, if the blind faith which gives economics an imaginary mystic force is carried on.»

According to Pope Pacelli, «it is necessary to understand that economic relations among nations will be tools for peace  as much as they will obey the norms of natural law, inspire love, care for the other and be sources of help.»

Pius XII was also suspicious of a union of European nations merely based on economic purposes, because the union would be frail, without a «big and effective» ideal that would «make it strong in the defence and operation for a common program of civilization.” »

Coexisistence is not enough either, Pius XII admonished, since «to justify» the quest for peace, there must be a «coexistence in truth». For this purpose, «skeptical and cynical people» are not fit to be the basis of human unity, since their materialism reduces «even the most beautiful truths to physical reaction» and since «they speak of mere ideologies.»

«Those who do not acknowledge absolute truths nor accept moral obligations in social life» are not fit, too, since out of this «descructive and unreasonable critic» have come to prepare an atmosphere «favorable to dictatorship and oppression.»

This radiomessage is very rich in offering topics for further reflection. It is from this starting point that the Church carried forward its presence in the world during the Cold War and beyond. Diplomatic effort run side by side with cultural engagement, catechesis and education, to build up a  coexistence in truth.

Yet, cynics, skeptics, those who do not acknowledge absolute truth have won the day. Europe has lost its identity, integral human development has been overshadowed, alliances among States are above all economic in nature and biased toward the benefits of biggest and wealthiest nations. The Holy See has always strongly spoke out about these problems, criticizing the formation of the “G groups” (G7, G8, G20), backing instead multilateral and inclusive multilateral policies, in order to include the weakest States.

It was not enough. International scenario is completely fragmented. One can only powerlessly look at the crescent moon of conflicts broke from the heart of Europe to Africa, since there are not strong international actors on the horizon.

The Catholic Church can still exercise  moral influence, to help States to pursue common good. It has not the power of deterrence, as noted by the Papal nuncio to Ukraine Thomas Gullickson. But it can express its moral strenght based on truth, which is what can really unite States.

This is the reason why Pope Francis should continue his efforts for peace. His word in the plane reiterated once again the position of the Church, whose international diplomacy cares for people, not for issues. Perhaps, Pope Francis should be guided by and beatify Pius XII for his prophetic gift. A prophecy that John XXIII carried forward, halting the Cuban missile crisis. Paul VI followed the same path, with his wonderful speeches on peace and disarmament. John Paul II emphasized it, pushing for a diplomacy based on the relation with people and not with States, one of the true reasons that made the Soviet Union fall. And Benedict XVI went further in this path, with his diplomacy of truth that was part of a reform project intended to give a structure (juridical, theological) to the big ideals of the Church.

Now, Pope Francis is called to take these responsibilities forward. He must be conscious that the destiny of humanity can depend on the strength of his stances.

2 Responses to Pope Francis and the reaffirmation that peace is possible. Following Pius XII tracks