Pope Francis, is the perception of the season of justice changing? Pope Francis, the financial question is a Pandora’s box

Pope Francis and the relationship with the movements 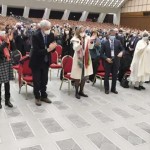 Julian Carron’s sudden resignation from the leadership of Communion and Liberation was the first outcome of a decree from the Laity, Family and Life Dicastery, which stipulated that no ecclesial movement, if not led by the founder, could have presidents or persons in governmental offices for more than two five-year terms. The measure was considered an ax of Pope Francis against ecclesial movements. Is that, then, a direct attack on the movements by Pope Francis? Or is it rather part of his modus operandi, of his need to open processes and at the same time break others that are developing?

The question is legitimate if we think that the provision that affects ecclesial movements is similar to that of all the top officials in the Curia. With the reform Pope Francis wanted, there should no longer be any top positions that can last more than two five-year terms. And it must be said that Pope Francis himself is applying this rule, still unwritten, with various almost sudden transfers, such as that of his secretaries.

But to understand Bergoglio’s attitude, we need to go even further back in time, to 2008. And the occasion was highlighted by Alver Metalli, an Italian transplanted to Argentina for years, former director of 30 Giorni, a monthly linked to Communion and Liberation. Metalli is of Communion and Liberation, and of that circle that was created around Father Giacomo Tantardini, founder of the monthly 30 Giorni and a friend of Cardinal Bergoglio.

Metalli recalls that on 22 July 2008, Cardinal Bergoglio went to present “Is It Possible to Live This Way?” a book by the founder of Communion and Liberation, Don Luigi Giussani. It was the fourth time that he presented a book by Fr Giussani, for whom Pope Francis has always had great esteem.

It was the first time, however, that the presentation took place after the death of Fr Giussani. And Bergoglio – says Metalli – wondered “how to take charge of the legacy of a founder, specifically of the written legacy? Starting from which hermeneutics? The great temptation in these situations is to codify the legacy, in this case making a manual of Giussani’s ideas and affirmations.” He said that the question had to be asked while Giussani’s voice was still alive, but it was a question to be remembered twenty years later.

Metalli says that two weeks later, Bergoglio took up the concept with another movement, that of Sant’Egidio, while presenting the book Convivere by the founder of the community Andrea Riccardi.

Here it is worth following the notes directly from Metalli’s tale.

“Already the third General after St. Ignatius had the temptation to codify the Ignatian intuition of the formula of the Institute, and the constitutions and rules began to emerge all over the world: for priests, for students, for the sacristan, for the doorman ... Everything they had to do was codified. In another era, during the pontificate of Pius XI, a General of the company recoded all the rules. That is, the Jesuits went through a second distillation, a second still. This General made the Epitome of the Institute [a compendium] of the Company, where the Constitution and the Rules were together, everything well codified by themes, and with a very extensive critical system. This General, a very holy man, went to see the superior of the Benedictines and brought him what he had done as a present. The Benedictine looked at him and said: Father, with this you have just killed the Company.”

Then, Bergoglio answered how to take charge of the legacy of a founder with the suggestions that Saint Vincent of Lerins had given. In short, for Pope Francis, a charism will be perpetuated over the years “not if it is preserved,” but instead “if it expands and acquires other forms according to time, if it is sublimated into ever richer expressions according to historical time.”

It should be noted that it is not the first time that the Pope mentions Saint Vincent of Lerins. He had already done so in his first interview with La Civiltà Cattolica in 2013. After that, he had mentioned him in one of his greetings, for the 25th anniversary of the publication of the Catechism of the Catholic Church.

On this last occasion, the Pope cited the only work by Saint Vincent of Lerins that has survived intact to us, the Commonittorium. “But someone will say, perhaps, ‘Will there be no progress in Christ’s Church?’ Certainly, there will be – all possible progress. For what being is there so envious of men, so full of hatred for God, who would seek to forbid it?” St. Vincent wrote.

In practice, St. Vincent does not speak of a change of doctrine but a new approach, a new way of seeing things. Precisely, to take things out of the pre-established schemes. Pope Francis believes that the best way to do this is to “force” people to limit their powers. Pope Francis does not educate for change. He simply makes sure that it is implemented, and he does it powerfully, deciding authoritatively.

Pope Francis does not want to change the charisms. He wants the mentalities to change. And he wants to be the one to lead the change. It is a centralizing approach, even if everyone says that Pope Francis favors and has substantially developed synodality. This, however, is not the reality.

We must think of the enormous juridical corpus produced by the Pope and clear decisions that have been made at certain particular times. The latest example is the motu proprio Traditionis Custodes, which practically abolishes any liberalization for those who want to celebrate according to the ancient rite and does so in a clear way, even establishing a distance from other approaches.

In the end, the Pope, who is said to hate legislation and codifications, is making laws and codes quite quickly. If this will last the test of time is yet to be determined. The decision on the movements, however, is part of this logic of Pope Francis. The logic of those who want to decide, rather than accompany, according to an almost secular modus operandi. Because without accompaniment, only the decision of the boss remains. It might be hard to bare with this decision making attitude, though.

One Response to Pope Francis and the relationship with the movements