Pope Francis, and the risk of character assassination 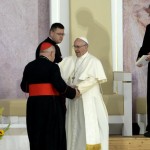 Cardinal Angelo Bagnasco was in Poland to investigate allegations of cover-up of abuses made against Cardinal Stanislaw Dziwisz, Archbishop Emeritus of Krakow and legendary secretary of John Paul II. The cover-up would have taken place during the period in which Cardinal Dziwisz was the archbishop of Krakow. But the news itself is enough to cast a shadow over the pontificate of John Paul II. And to impeach the Polish Church in an almost scientific way.

The negligence charges against Dziwisz are just the latest in a series. Beyond the yet-to-be established facts, it is worthwhile to engage in a broader reasoning on the allegations and how they are dealt with. The risk is that of a dictatorship of public opinion that does not allow, in the end, to have a clear eye on things.

We cannot tell whether Cardinal Dziwisz actually covered up the allegations of pedophilia. We can, however, try to understand the context in which the Cardinal lived. During the Soviet dictatorship, accusations of alleged abuses came up to defame priests, and often the ecclesiastical hierarchies had learned not to believe them. It is a way of protecting the Church, perhaps extreme but genuine. And Cardinal Dziwisz was permeated with it.

So was John Paul II, as can be understood from reading the voluminous McCarrick report – which in any case seems to be written in such a way as to put the pontificate of John Paul II in a bad light.

Beyond the veracity of the accusations, however, there are broader issues to consider. Shedding light on what is happening is necessary. No one should question that. However, there are other questions. Why is this news filtering? And why are these news not dealt with exhaustively by the communication branch of the Holy See? Discretion is essential and necessary, which is why information about this type of investigations is not shared publicly. The Church first of all wants to understand where the accusations come from and if they are true. The pressure of public opinion could influence her judgments.

Once the news is leaked to the press, there is a need for official reactions, because the Church must first of all be protected: the stains of some or many cannot change the beautiful and positive idea of the Church. Among other things, the leaks are interesting because they give an idea of who the sources are. If it is not the Pope’s commission, if it is not the nunciature, the information comes either from the alleged victims or from the alleged accusers. What reason would they have to let people know what’s going on?

The second issue is of a more strictly legal nature: how is negligence defined? What is the evidence to decide whether a person (in this case a cardinal) was negligent or not? The indeterminacy of the term risks leading to the arbitrariness of the law. Everyone can be accused of negligence for not intervening when they could, despite any evidence to the contrary.

The third theme concerns precisely the attacks on the Polish Church. And it goes back to 2019, when the alleged victim Marek Lisinski, president of the Polish foundation “Do not be afraid,” arrived with great media hype to meet Pope Francis at the end of a General Audience, together with the honorable Joanna Scheuring-Wielgus, a member of the liberal-libertine “Now!” party, known for its stances against the Church; and Agata Diduszko-Zyglewska, a militant feminist linked to the radical far-left movement “Political Criticism,” organizer of the Days of Atheism, which aims at eliminating the teaching of religion in schools.

It was later discovered, thanks to the revelations of the journalist Sebastian Karczewski and the liberal and openly hostile to the Catholic Church “Gazeta Wyborcza” newspaper that Lisinski was not a real victim. Instead, he had borrowed money from a priest, Zdzisław Witkowski, and not wanting to repay the debt he instead accused the priest of molesting him 30 years earlier.

Of course, it is a coincidence, but it shows how abuse must be treated with delicacy. Among other things, in Poland, abuses have become a way of attacking the Church, especially now that politically the country is going in a stubborn and counter-mainstream direction: a Poland that has declared eugenic abortion unconstitutional, and that offered a diplomatic channel to repatriate a Polish citizen from England to try to prevent a masked euthanasia, is a nation that certainly is not of the liking of those who, on these new rights, have launched a campaign and even influence governments. There is a lot of money at play and a strong organization pushing these issues.

This concerns Poland, but also other nations or politicians who take a particular stance. Stating this doesn’t amount to indulging in conspiracy theories. Rather, it means considering all aspects of reality.

If nations are under attack, the Church is all the more so. When, in January 2020, Cardinal Philippe Barbarin was acquitted of the accusation of covering up abuses in France, the theologian Massimo Faggioli commented that the acquittal in court could not overturn “the guilty verdict already issued by public opinion, which is what matters for trust in the Catholic Church.”

In short, the crucial point is credibility, not truth. The Church cannot defend itself from unjust allegations because her credibility is undermined. Her credibility is not based on facts, but on what public opinion thinks. Given that credibility is more easily obtained by professing faith and truth than by accepting unfounded accusations, it is true that the drama of abuse has thrown the Church into the position of not knowing how to respond.

The risk is that of character assassination of any priest accused of abuse or bishop accused of negligence. Even when Cardinal George Pell was found guilty before being acquitted, there were lukewarm reactions. It also happens when the dioceses prefers to pay compensation rather than go to trial to avoid a scandal. And it has happened that priests accused of abuse, suspended from their priestly functions, but later found innocent, could no longer return to the dioceses they came from.

It is the strength of the dictatorship of public opinion. And the communication response of the Church does not seem able to isolate this problem. On the contrary, there is the idea of being resigned to never being able to weigh in to influence public opinion, and to never prevail in asserting the truth. Measures are taken that at times appear more populist than real. Like that of the abolition of the pontifical secret for crimes of abuse of minors, even if the pontifical secret does not apply to those issues.

The answer, therefore, risks creating more damage than the show trials. It is certainly not an ideal prospect. When the Church is being defined in the here and now, without historical depth, the attacks on the former secretary of the Polish Pope risk going into questioning an entire pontificate. But is this what we want? Do we want everything to be in year Zero?

It’s hard to say. It would be good, however, if the accusations against Cardinal Dziwisz were contextualized. If only to avoid that sensationalist journalism that hurts the Church. A good communication response from the Church must be based on truth. No matter how much this may put the Church in an uncomfortable position.

4 Responses to Pope Francis, and the risk of character assassination