Does Pope Francis have a plan? And which plan? Pope Francis, his ecumenical diplomacy in Ukraine

Pope Francis and the Ukrainian crisis. What he did, what he could have done 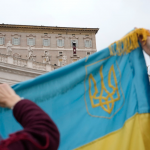 Pope Francis has called for another day of prayer for peace on 2 March, Ash Wednesday, focusing on the war in Ukraine. Since the beginning of his pontificate, Pope Francis has wanted to give prayer a leading role in his diplomatic decisions. From the day of fasting and prayer for Syria in September 2013 to the prayer for peace in the Middle East in the Vatican Gardens in June 2014, to the spiritual retreat for the leaders of South Sudan in the Vatican in April 2019 to the days of prayer for Congo and South Sudan and then for Lebanon.

Regarding Ukraine, Pope Francis met with the Synod of the Ukrainian Greek Catholic Church in July 2019. In that meeting, neither he nor Cardinal Pietro Parolin, Vatican Secretary of State, hesitated to define what was happening in Ukraine as ” hybrid warfare.”

Then, there was the “Pope for Ukraine” initiative, the meetings with the major archbishop of the Ukrainian Greek Catholic Church Sviatoslav Shevchuk, whom the Pope knows since he (Bergoglio) was archbishop of Buenos Aires, the two visits to the country of Cardinal Pietro Parolin, Vatican Secretary of State, and of Cardinal Leonardo Sandri, prefect of the Congregation for the Oriental Churches.

The nunciature in Ukraine has had, in recent years, high-profile diplomats: the crisis of 2014, with the so-called “Euromaidan” riots, saw Archbishop Thomas Gullickson on the ground, who demonstrated that he was able to read Ukrainian events with clarity; then Archbishop Claudio Gugerotti was appointed nuncio, a deep connoisseur of the Eastern Churches fluent in Russian and able, among the few diplomats in the area, to reach the places of conflict; finally, this year Visvaldas Kulbokas was chosen as nuncio, who knows the situation in Ukraine well because he was the one in charge of the Kyiv dossiers in the Vatican Secretariat of State.

Yet, despite many gestures, the diplomacy of the Holy See appeared weak, almost marginalized. It did not developed a critical perspective on the actions of Vladimir Putin’s presidency. It preferred not to take a position on some crucial issues, remaining silent in the name of a dialogue that the forces on the field did not want. Instead, the pope doubled down on his positions on vague appeals for peace and goodwill that may strike people’s hearts but certainly have no short-term political impact.

The latest event was Pope Francis’ visit to the embassy of he Russian Federation to the Holy See on Feb. 25. It was, however, not a diplomatic intervention. The Pope might have summoned the ambassador. By not doing so, he somewhat diminished the impact of the institutional role. He acted as a priest, not as a head of the most ancient diplomacy in the world. It seems odd, but these gestures can make his interventions less authoritative. If he is just a shepherd, though an important one, what is the impact of what he says or asks for?

We must be clear: to think that a single papal appeal can have a diplomatic impact today is an illusion. The Holy See maintains its role as a credible partner internationally, mainly as a third nation to rely on for mediations. But mediation only works if the parties want to negotiate, and not just because the Holy See wants to facilitate it.

In some way, the Holy See has lost that aura of trustworthiness that made it listened to at an international level. Pope Francis’s diplomacy focused on major global issues and the development agenda, such as migration, disarmament, and ecology. But that further impulse was lacking that word of prophecy that stands in the background, given by faith in God and by the encounter with Jesus Christ. It has become a pragmatic diplomacy, and this has made it, in some ways, a diplomacy similar to all others. Vatican Ostpolitik was accused of excessive pragmatism after the Cold War. But that, nevertheless, was a pragmatism that served to save priests under constant persecution, to guarantee apostolic succession. It was something profoundly different in themes and setting. Perhaps criticizable, but different.

What should or could the diplomacy of the Holy See have done in this particular crisis?

First point: develop international awareness. The cross-information network of nuncios and missionaries is among the best in the world. The Church is on the field, speaks to the people, and has the tools to make a detailed analysis. That there could be an escalation was an eventuality. But suppose the diplomacy of the Holy See cannot stop an escalation. In that case, it can create a public opinion that understands the reasons for the escalation, going beyond the typical dichotomies of no to war / yes to war. Where was the analysis of the Catholic media on the subject in these years of conflict in Ukraine? Where was the information disseminated? Where has the debate been disseminated?

Second point: in addition to engaging in networks for communication, it is essential to work multilaterally and in a coordinated and sustained manner. The Holy See maintains representatives at the United Nations and large international organizations. Putting geopolitical issues at the center, particularly the question of a possible war in the heart of Europe, was fundamental and necessary. Side events should have been organized, texts and appeals written, and interviews granted in a periodic and structured manner. The international partners had to be made aware that the Holy See was observing the situation.

Third point: abandon the policy of appeasement in favor of a diplomacy of truth. This means talking pragmatically with all partners, collaborating with them, but not taking precise positions on some issues. Putin was even able to get ahead of the Pope, calling him for his birthday once it became known that the Pope wanted to call him to talk about Ukraine. These are initiatives that the Holy See should take. Humanitarian commitment is not enough. It is also necessary to show oneself as not afraid to put issues on the table. The Holy See can do this because it has no interests of any kind except those of the freedom of her children and the dignity of the human being.

Fourth point: work with the diplomatic corps accredited to the Holy See. Meet them, share positions, let governments know the positions. Make these exchanges public so that people can be aware that there is a mainstream point of view but also a broader point of view. Words of hope arise from greater prospects.

Fifth point: continue to emphasize the importance of faith. There is no fraternity if there is no common Father. But Christians believe that this father already has an incarnate Son, who is Christ. It is the presence of Christ, alive in the Eucharist, which calls for upholding human dignity, which makes the Church’s social doctrine alive. It may seem absurd, but the very moment in which the Eucharist is relativized, or the saving reality of the Gospel is put aside in the discourse, then the Church loses vigor. It becomes something like an NGO. There is a lot of talk about Christianophobia, and it is a sacrosanct theme. The persecution of Christians, hidden and not hidden, is very strong and present. But Christianophobia is a sociological concept.

In 2012, when Benedict XVI spoke of Christianophobia, there was a rumor that in the first draft of his speech, he had used the term Christ-phobia, that is, the fear of Christ. I think it would be a theme that should be re-proposed, and with force, also in the discourse on conflicts. It must be understood that returning to Christ is the only way, not only for Europe but for the whole world, of avoiding disputes, reconciling memory, creating an authentic identity that has human dignity at its center.

In a nutshell, we must return to the power of the Gospel, supported by arguments of reason. Do not just hope to have a deterrent effect on the forces on the field. The last council of cardinals also spoke about the role of the nuncios. They are also conceived as having more of a missionary profile. It has already been established that a year of mission should be added to their studies. But the nuncio must create a cultural elite. He must coordinate the missionaries. He must work on appointing the new bishops. Only in this way will he be able to look to the future.

And this is, perhaps, one of the greatest lessons that the diplomacy of the Holy See must learn at this moment. At least in my humble opinion.

2 Responses to Pope Francis and the Ukrainian crisis. What he did, what he could have done