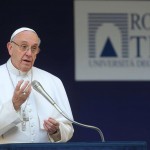 Benedict made the decision not to go because a series of protests by a small groups of professors impeded the conditions for a dignified and peaceful welcome. Some of the professors, criticizing (with erroneous quotes and references) some scientific positions which Pope Benedict was alleged to have held, put pressure on the Rector not to give the Pope the floor for what they thought was to be a lectio magistralis. In fact, to be precise, it was a lecture, an inaugural speech at the beginning of the academic year.

The point is not what the Pope’s speech was supposed to be. It is rather the gravity of what prevented the Pope from visiting a university. If today any kind of opposition against Pope Francis is mounted, and anti-papal posters or the fake copies of the L’Osservatore Romano that ironically mixed Pope Francis’s affirmations are criticized, one should never forget that opposition to Pope Benedict did not reveal a tone of irony, as in Francis’s case, but of the cultural war. This cultural war seems not to be taking place any longer.

The question is: why did this cultural war die out? Why did the world change in so short a time?

The first possible answer is that Pope Francis garners a great deal of consensus from the secular world. This world often finds the Church’s doctrine to be a form of backwardness and not an expression of the truth of the Gospel, and for this reason it appreciates much more Pope Francis’s pragmatic approach. The secular world, in the end, prefers vague stances instead of the affirmation of the truth of the faith. This world appreciates in Pope Francis the grand – sometimes naive – openness to dialogue.

Pope Francis’s openness to dialogue leads him to accept conditions which are perhaps unacceptable in other circumstances.

One example: in the case of the joint declaration signed with Patriarch Kirill in Havana, Pope Francis seemingly allowed the Moscow Patriarchate to get the maximum possible gain from the statement. The declaration, for example, does not make any mention of Christian priests kidnapped in Syria, but only mentions the Orthodox bishops. The declaration also uses the term “Uniates”, taken from a document of the 90s, a term that in fact cannot be accepted by the Greek Catholic Church of Ukraine.

There is no surprise, then, that the Pope hurried to describe this declaration as a pastoral one, and this is how the Vatican still interprets it, avoiding the very geopolitical interpretation that is employed by the Moscow Patriarchate.

Another example: Pope Francis made the decision to go to Lund, Sweden, to commemorate the 500th anniversary of the Lutheran Reformation for only one day and for only that purpose. So at the beginning, a meeting with Catholics in Sweden was not foreseen, although Catholics in Sweden constitute a real existential periphery. Only later, after being persuaded by the requests of the local Catholic Church, did the Pope add a second day to the trip in order to meet Catholics in Malmoe, while nevertheless showing some complaints about it in an interview with a Swedish Jesuit weekly.

One final, third example, that is the closest to the Roma Tre situation. Pope Francis loves to speak with Eugenio Scalfari, the founder of the leftist newspaper, La Repubblica. Not only does the Pope do this willingly, but he even permits Scalfari to publish the interviews solely on the basis of his recollection of their conversations, while also accepting that Scalfari adds statements and interpretations to what the Pope actually says during the interview.

So, the invitation to Roma Tre University represents a little more of an opening to the limits of the unacceptable. The event was designed as a secular event. This means that no clergy were invited. Bishop Lorenzo Leuzzi, Auxiliary Bishop of Rome, charged with the pastoral care of the universities, was not invited at the beginning, and only later he could be present, but not as part of the Papal circle. Cardinal Agostino Vallini, Vicar for Rome, was also not invited. Fr. John D’Orazio, University Chaplain, was invited at first, but in the end was told to remain with the students: he was not allowed to greet the Pope.

Pope Francis, for his part, made the decision that no clerics should take part in the meeting. He wanted the meeting to be without any filter, simply a series of questions and answers with the students. The Pope’s idea was to open the floor to dialogue. But the truth behind this arrangement is that the dialogue had some boundaries. It was designed as a simple meeting of the Pope with students, without, de facto, any institutional weight being associated with the Pope.

That the Pope would have liked this can be taken for granted. Pope Francis has set up a non-institutional way of governing, and he mostly rules via a parallel Curia, with friends and people he trusts. The Roman Curia is set aside, while its reform is awaited – but a complete draft of the reform may not be ready before 2018.

But that a university was allowed to negate the Pope’s institutional role by cutting him off from the world of the Church he represents is a completely new phenomenon. And it is food for thought.

Once again, the Church is accepted only when it is on side – when it is not considered an institution in its own right, but, instead, one of many secular allies, that is, when the message proclaimed by the Church is not disturbing, because counter-cultural. And this is proven by recent movie productions, from Silence by Martin Scorsese to the upcoming Steven Spielberg movie on Edgardo Mortara’s story.

It is then worth a glance at what Pope Benedict was going to say to La Sapienza University. After he cancelled his visit, he made public the text of his lecture. From the very beginning, he made clear that he was called to speak there as “Bishop of Rome.”

Benedict explained that a bishops is “the one who observes the whole landscape from above, ensuring that everything holds together and is moving in the right direction. Considered in such terms, this designation of the task focuses attention first of all within the believing community.”

That means that “the Bishop – the Shepherd – is the one who cares for this community; he is the one who keeps it united on the way towards God, a way which, according to the Christian faith, has been indicated by Jesus – and not merely indicated: He himself is our way. Yet this community which the Bishop looks after – be it large or small – lives in the world; its circumstances, its history, its example and its message inevitably influence the entire human community. The larger it is, the greater the effect, for better or worse, on the rest of humanity. Today we see very clearly how the state of religions and the situation of the Church – her crises and her renewal – affect humanity in its entirety. Thus the Pope, in his capacity as Shepherd of his community, is also increasingly becoming a voice for the ethical reasoning of humanity”.

Benedict XVI observed: “Today we see very clearly how the state of religions and the situation of the Church – her crises and her renewal – affect humanity in its entirety. Thus the Pope, in his capacity as Shepherd of his community, is also increasingly becoming a voice for the ethical reasoning of humanity.”

Pope Benedict knew that a Pope could be accused of a sort of pro-religious bias, as he takes his judgments from faith. But he noted that “John Rawls, while denying that comprehensive religious doctrines have the character of ‘public’ reason, nonetheless at least sees their ‘non-public’ reason as one which cannot simply be dismissed by those who maintain a rigidly secularized rationality.”

In the end, the Pope argued, “[John] Rawls perceives a criterion of this reasonableness among other things in the fact that such doctrines derive from a responsible and well thought-out tradition in which, over lengthy periods, satisfactory arguments have been developed in support of the doctrines concerned.”

This affirmation is important because of “the acknowledgment that down through the centuries, experience and demonstration – the historical source of human wisdom – are also a sign of its reasonableness and enduring significance. Faced with an a-historical form of reason that seeks to establish itself exclusively in terms of a-historical rationality, humanity’s wisdom – the wisdom of the great religious traditions – should be valued as a heritage that cannot be cast with impunity into the dustbin of the history of ideas.”

These words should be enough. The speech went on to make a refined distinction between philosophy and theology, on which Benedict based his understanding of a university, a cosmos of knowledge where religion must have a place.

Perhaps, the real point is that today religion is a reality that is being cast into the dustbin of ideas. A big NGO – and Pope Francis often warned against turning the Church into a merciful NGO – that can be appreciated for its work with poor and refugees, but that must be feared when it expresses the truth and defends the indispensable values of faith.

Pope Francis’s criterion of the Church that is “outward bound”, his trips to where the faith is needed, and his preaching that aims at an evangelization by attraction are very much liked. And these are all very important things, a fundamental part of new evangelization trends. But they are emphasized to the point of overshadowing the teaching of true doctrine.

This is the reason why the debate that has arisen within the Church generates division, while from the outside praise for the Pope is apparently worked out in a way that could divide the Church even more. It cannot be denied that there are different visions on many issues within the Catholic ranks, and also among bishops. What is new is that the debate is being fueled by media in such a poisonous way.

All these premises help Pope Francis to enter a university, which Benedict could not do. He did not give a lectio magistralis, or even a lecture. He went only to dialogue with young people. If once attacks against the Church were aimed at undermining the Holy See’s diplomatic weight, now it is the cultural weight of the faith that is simply being annihilated. This path is indeed very reckless.