Pope Francis and the Vatican middle world he has not shed 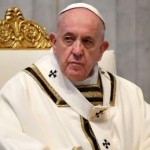 The death of Paolo Gabriele could have closed a chapter of the Vatican world. It was not so. Instead, he has opened another, and this one too has more questions than answers.

For those who do not remember, Paolo Gabriele was Benedict XVI’s butler who then betrayed the Pope’s trust and handed over confidential documents to journalists, who made them books, bestsellers, and attacks against the Church. Tried for aggravated theft and convicted, he was forgiven by Benedict XVI and remained employed by the Vatican because he was hired by a cooperative that worked in the Bambino Gesù, the pediatric hospital of the Secretariat of State.

Gabriele died on November 24, at the age of 54, after a long illness, and his funeral saw the presence of many of the people who loved him and who worked with him. Archbishop Georg Gaenswein, personal secretary of Benedict XVI, testified how the Pope emeritus’  entourage affection had remained unchanged, despite everything. Cardinal James Michael Harvey, at the time prefect of the Papal Household, has always been close to Gabriele. There was Archbishop Paolo De Nicolò, that has been for long time “reggente” of the Pontifical Household. Cardinal Konrad Krajewski, who at the time of Paul Gabriel’s service was one of the papal master of ceremonies, was there too.

Despite everything, the Vatican had not forgotten about Paolo Gabriele. It had tried and sentenced him, but it had always taken into consideration first of all the person and not just what he did. It was an act of humanity, but it was also an act of justice. Also because anyone who knew Paolo Gabriele well knew that he would never betray the Pope out of his own free will, he had neither the mentality nor the skills to do it.

Eight years after the theft of documents, which gave rise to the first Vatileaks, we are faced with the same problems. One could think that Paolo Gabriele’s departure would have represented the end of everything. It was only the beginning. Not only is Vatileaks not finished. There was another leak of documents, culminating in another Vatican trial in 2014. Not only that. Many of the Vatileaks season’s protagonists are still there, moving between the Vatican middle world’s folds and using this middle world as they please.

The problem is not the leak of information, nor the journalistic flair that leads to anticipating information. It is nothing like that. It is instead a particularly selective news stream, managed in such a way as to put this or that person in a bad light and above all to attack the Church.

It is an evil world, which was dangerously exposed during the recent financial scandal that hit the Holy See. The scandal involved the purchase by the Secretariat of State of a luxury building in London. A world that has no interest in the Holy See but uses it as a means to carry out its purposes.

At the time of the first Vatileaks, there was much talk about the possible “masters” of Paolo Gabriele. At the time, it seemed evident that these masters came from the old curial guard, and in particular, the old diplomatic guard, disappointed by a lack of attention on the part of Benedict XVI and Cardinal Tarcisio Bertone, Vatican Secretary of State.

This could be partially true. But subsequent Vatileaks showed that the circle of interests went beyond Vatican diplomats’ profile of the old guard, which actually came back at the beginning of Pope Francis’ pontificate.

Among other things, Pope Francis had immediately made sure to give greater prominence to the nuncios, choosing a long-time diplomat such as Cardinal Parolin as his secretary of state and also creating Cardinal Josef Rauber, who as nuncio in Belgium saw his suggestions disregarded and which was then elevated to cardinal by Pope Francis, in a sort of posthumous compensation.

Despite this renewed attention to the diplomatic world of the Holy See, the leaks continued. Again, it must be understood that this was not a trivial round of news. Advance notice on Vatican events, even scandalous readings, have always been made. In this case, it became clear that the information was more professional and focused, almost secret service-like. Above all, it was based on the theft and publication of complete documents, often de-contextualized, not on the use and interpretation of previewed documents.

Step by step, it also became clear that the news was not about the Vatican world. Everything has become the prerogative of judicial reporters, who have often fed on investigations into Vatican issues and have magnified, told, and exalted them, thus making the image of possible corruption in the Vatican huge.

The second Vatileaks trial, however, avoided addressing the issue of the theft of documents and therefore left a big question mark over the situation. Who leaks papers and minutes to be published? And for what reason?

After eight years, the figure of Paolo Gabriele appeared faded in the Vatican world. Unlike those who fed on his information, he didn’t get rich; he didn’t sell books, he didn’t even write any memoirs. He was an instrument, and as such, he was condemned and then forgiven.

His death, however, did not close a chapter, just as the papal pardon granted him had not completed the season of Vatileaks. That is a trend now, and it isn’t even possible to think about journalism differently. Vatileaks is not over, and it may never end.

Paolo Gabriele’s was the first, but undoubtedly not the most significant case. The burning questions have all remained unanswered. He did not betray any of his friends, and he never betrayed himself. But why should a man risk a prestigious job, a home, preferential treatment, privileges, just to work with people who cannot be trusted?

It is the most mysterious question in the history of Paolo Gabriele. And it is a question that should also be asked of many of the characters who gravitate in the orbit of the Holy See and those around Pope Francis, because whoever instrumentalized Paolo Gabriele is continuing to do that with other people, or personally.

The real power is the invisible one. And there is indeed a deep Church that functions as a deep state, made up of prelates with a specific influence in world affairs. Paolo Gabriele was not part of anything. He was just a man who loved Benedict XVI, convinced that doing what he did would help the pontificate. Anyone who knows the things of the world knows that this can happen. And knows, also, that, after all, in his view Paolo Gabriele did it for the Church. It is difficult to see if all the past (and well paid) consultants in the Vatican in recent years had the same notion of pursuing the good of the Church.

If there is anything that the death of Paolo Gabriele closes, it is the era of people faithful to the Church to the point of sacrificing something of themselves to help it, even in the wrong way. Today, those who say they are close to the Church do so above all to draw advantages. This is the most challenging corruption to eradicate. There is a lot of work ahead.