Pope Francis, facing a 2010 – 2.0? Pope Francis and the Vatican middle world he has not shed

Pope Francis and the Vatican plots 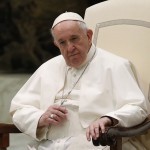 In the end, Cardinal Angelo Becciu sued the Italian magazine L’Espresso for a defamatory campaign against him. The complaint provides a series of details to claim there was a plot against the Cardinal. The word “plot” was mentioned, for the first time, by Vittorio Feltri, editor of the Italian newspaper Libero. Feltri used broad excerpts of the complaint to explain better what happened to Cardinal Becciu.

What was the plot? Feltri jots down a theory: that, while the MONEYVAL inspectors had their on-site visit in the Vatican, the Vatican itself wanted to serve on a silver plate a significant head, to underscore the genuine commitment of the Holy See to combat money laundering.

To understand the story, we need to trace it back. On Sep. 24, Cardinal Angelo Becciu goes to a regular audience with the Pope. After 20 minutes of the meeting, the Pope asked him to resign from his position of Prefect of the Congregation for the Cause of the Saints and to renounce his cardinalatial prerogatives. His resignation news is released from the Holy See Press Office before the Cardinal himself can communicate it. In a press conference the day after, Cardinal Becciu will explain that the Pope told him he could not trust him anymore since the Vatican judges found that he allegedly embezzled funds to favor of some of his relatives.

In that very same week, the magazine L’Espresso published an investigative report on the alleged Cardinal Becciu’s favoritism to his family by allocating (or asking to give) resources to companies owned or co-owned by his brothers. During that time, he was “sostituto” (deputy) at the Secretariat of State.

From then onward, L’Espresso published five in-depth articles on Cardinal Becciu’s activities. The first one ends on the Pope’s desk before its publication. Maurizio Molinari, the editor of Repubblica (a newspaper part of the same L’Espresso’s publishing house), said in a tv show that the day of Becciu’s resignation, the office was pretty agitated. Since they are in the same building and are owned by the same publisher, journalists of La Repubblica knew about L’Espresso’s scoop. But they also knew, Molinari added, that some copies already printed and ready to be delivered in the stores were mistakenly delivered to Domus Sanctae Marthae, where the Pope lives. According to Cardinal Becciu, the Pope had a copy of the magazine in his hands when he asked him to resign.

Cardinal Becciu’s lawyer went beyond and analyzed the source codes of L’Espresso’s website. They thus discovered that the magazine already created and posted the piece about Becciu’s resignation eight hours before Becciu’s scheduled meeting with the Pope. There is no way to make this up: source codes are precise.

Cardinal Becciu then sued L’Espresso and asked for a compensation of 10 million euros for defamation and damages. The sue, a 74-page file, includes all the imprecisions of the articles. In the end, Cardinal Becciu does not want to be the one and only scapegoat.

In his piece for the newspaper Libero, Feltri recounts this story, and then he raises the possibility of a conspiracy against the Cardinal. Feltri pretends not to believe in a plot too much. However, if he used that word, it means something. Since he directly got the information from a source within the Holy See, the idea of a conspiracy was primarily born out of the Holy See.

And so we get to MONEYVAL, a Council of Europe committee. It is entrusted to evaluate how the countries who join the committee observe international standards on combating money laundering and the financing of terrorism.

The committee’s on-site visit to the Vatican was scheduled for Spring 2020, and it was then postponed to Sept. 29 – Oct. 11, 2020, because of the pandemic. After the on-site visit, the committee will draft a progress report, to be discussed at the MONEYVAL plenary assembly in April. It is the fourth progress report on the Holy See / Vatican City State and will be about the judicial system’s effectiveness; that is how the Vatican judicial system enforces the norms. The previous MONEYVAL report criticized the Vatican tribunal for not conducting enough prosecutions. Between 2011 and 2016, there have not been any known prosecutions after the AIF suspicious transactions reports. Things then slowly moved on after 2016.

It was not enough for MONEYVAL. In the 2017 Progress Report, MONEYVAL noted that “the results on the law enforcement/prosecutorial/judicial side two years after the last review remain modest.”

Which are the reasons for a plot, then? First of all, the Vatican tribunal wanted to show how effective it is; then, they wished to raise a media scandal to cover mistakes; finally, the need to find a scapegoat.

And Cardinal Becciu was, in the end, a perfect scapegoat. Although many of the financial decisions now under scrutiny were made after he left the post, Cardinal Becciu had a high profile. Some even say that Cardinal Becciu could be a perfect kingmaker in a conclave to elect the next Pope.

It is essential to stress that we are talking about theories. Likely, there has not been a real plot. However, the Holy See did its best to impress MONEYVAL: the inspectors were welcome by a kick-off address by Cardinal Pietro Parolin, Vatican secretary of State, and also had a private audience with Pope Francis. Not bad for the technical committee. The MONEYVAL experts never meet the top ranking of the countries they inspect since they are just called to evaluate on concrete bases.

Does Cardinal Becciu’s resignation help the Vatican to show that they are working hard? It might be. However, it can also be just a desperate move to put some smoke into the international institutions’ eyes. International institutions, on the other hand, are not very proned to be framed. They look for facts, not for theories or prestige. And indeed, the Vatican investigation on the Sloane Avenue real estate in London raises more questions than answers.

There are six people under investigation. All of them were initially suspended from their position in the Vatican. Two of them, priests, have been sent back to their parishes. One of them was transferred to another office. The other two, officials of the Secretariat of State, negotiated a pre-retirement. One of them was not renewed in his position.

The measures came long before knowing whether any of these people will be charged with something or not. In the meantime, there was a media trial, which does not fit with the real facts.

Many leaks were disseminated in newspapers. A former Vatican radio official noted that Giuseppe Pignatone, the Vatican tribunal president, is also an op-ed writer for the GEDI Group, which publishes L’Espresso and Repubblica. There is nothing terrible in that, but it can lead to thinking that some information is treated differently by these media because of Pignatone. It is also thought-provoking that Vatican judicial news have very often appeared on L’Espresso.

One of the Vatican prosecutors, Alessandro Diddi, was the attorney of one of the defendants in the corruption trial name “Mafia Capitale.” He was often on tv to defend his client and has many connections in the media.

For those unfamiliar with the Italian environment, we must mention that it is common practice in Italy that prosecutors exploit the media to disseminate information, mostly for political purposes.

These details must be on the table when it comes to thinking about things happening in the Vatican. Repubblica and L’Espresso likely got the news of Becciu’s pushed-resignation in advance; they prepared the piece, and erroneously posted it before the news broke. Libero, which stands on the opposite side of the political spectrum, had in exchange the possibility to read Cardinal Becciu’s complaint.

This is how a Vatican issue turned into a public arena trial, polarized for political or personal interests. The Church disappeared in the scenario. The newspapers are on opposite political frontlines and enjoy a typical Italian environment that feeds and foment each other’s media.

The real target is out of sight, though. The investigative report is full of imprecisions and fails to pose the right questions. The focus should not be on who brought the intermediaries of the Vatican’s financial operation and why they had so much power and influence. It is a fact: the problems came out when the intermediaries of the Sloane Avenue operation were step by step cut out of the business, to preserve the Holy See.

If a financial operation was re-structured not to lose the money invested, why did the Pope not praise the operation and instead punished everyone?

One of the narratives says that the Pope was framed and that he knew nothing of the investments. It might be. But we all know that Pope Francis wants to know about everything personally. And, according to the lawyer of Monsignor Mauro Carlino, the Pope did. Carlino is one of the six Vatican officials suspended because of the investigation. His lawyer sent a letter to the newspaper La Stampa to clarify the position of Monsignor Carlino and to clearly state that the Pope was always informed. The details of the lawyer’s letter were not dismissed. The message was, however, harshly criticized by those on the other side.

It seems we have all the ingredients for a spy-novel. We have the story, a corrupt cardinal, the journalist, the Pope. It is not a novel, though. It is the Church. And the Church is running many risks because of this seemingly superficial investigation. One of the dangers is that Italy will, in the end, grant the extradition to Cecilia Marogna.

Marogna was at the helm of an intelligence society and got money for counseling and helping the Secretariat of State to liberate some priests and nuns held hostage in Africa. Putting aside if this is accurate or not; the extradition might cause one problem. If there will be an extradition, the Holy See will have to grant reciprocity. Why should the Holy See not grant the extradition of some top Vatican officials, say an archbishop? One of the reasons the Holy See has always been restrictive in extradition policies is to avoid persecution. What to do now?

This is just one of the many topics. There are many, all of them equally important and complex. They all go far beyond the allegation of theft and mismanagement of the Vatican patrimony. If there is a plot, it might also be this: to expose the Church to a series of allegations, to create a second Vatileaks effect, this time coming from within the Church.

Only time will tell if all of this happened for good. In April, we will know how MONEYVAL evaluated the Holy See. We will see, then, if the Vatican anti-money laundering law advanced for the best.