Pope Francis, what is your approach to theological questions? Pope Francis, and the narrative about the Second Vatican Council

Pope Francis and those Conclave voices 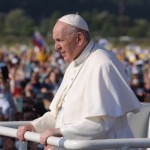 Pope Francis’ words about the fact that some had already thought about his succession at the news of his surgery represented a sort of punch in the stomach. Not so much for the rumors about a possible successor, because those have always been there, and not only when the Pope in charge is sick. It was instead the fact that the Pope spoke in those terms that was striking. Because Pope Francis has shown what he does not want to do: he does not want to take hits, stand by, nor defend the institution of the Church behind the idea that one does not show one’s own dirty laundry. He has decided to protect himself and his pontificate. And this will be the line.

Of course, the words of Pope Francis must be contextualized. The Pope was speaking in a private forum, with Jesuits, in a moment of relaxation in which perhaps he was allowed to make a joke. The fact is, however, that there are no moments of relaxation for a Pope. Specially when his words are recorded and then republished in full on Civiltà Cattolica. This is also known to the Jesuits participating in the meeting, of which, however, Civiltà Cattolica summarizes, does not transcribe, the questions.

The suspicion could even arise that the Pope’s words are also paraphrased, chosen, collected in such a way that the Pope is made to say what one wants to make him say. It is a silly suspicion, and we must discard it immediately. Nobody can doubt the good faith of Father Antonio Spadaro in reporting the Q&A between the Pope and the confreres. Of course, if a complete recording were published, this would help contextualize the meeting and the words of the Pope.

But assuming that the Pope made a joke, this was undoubtedly an unfortunate joke. Even Cardinal Pietro Parolin, Vatican secretary of state, wanted to distance himself from the Pope’s words. He limited himself to saying that perhaps the Pope has information he does not have, stressing that he did not feel a particular climate of tension. Diplomatic words, no doubt. Words that, however, also show a willingness to distance himself from the Pope’s declarations, with the result that the Pope appears to be increasingly isolated.

All this creates a kind of vicious circle. The Pope isolates himself because he takes decisions alone, without the usual official consultations and without placing total trust in his collaborators. The collaborators feel cheated, but above all, they are afraid to take the initiative in front of a Pope alone in command. The Pope suffers because his collaborators do not take the initiative and then criticize him. After all, they are afraid of him. So he publicly complains when they begin to think about a possible succession.

Pope Francis, however, must rest assured. Assuming that his information is accurate, it is neither the first nor the last time the Cardinals have begun to prepare a conclave or possibly organize consortiums while the Pope is still in office. The last ten years of John Paul II’s pontificate, for example, had been a permanent virtual conclave, with the list of candidates updated with each hospitalization or relapse of the Pope. As a result, there might have been ten virtual Popes in those years and many consortiums in favor of what appeared to be candidates.

For example, in those years, the first article on Cardinal Jorge Mario Bergoglio, presented to his readers by Sandro Magister as early as 2002, is counted.

Even during the pontificate of Benedict XVI, many thought about succession. Indeed, the first Vatileaks case was anticipated by the news of a possible plot to kill the Pope Emeritus himself, a mordcomplot, as mentioned in the papers published by Il Fatto Quotidiano. It is also that situation of attacks on the Church that lead many today to question the validity of Benedict XVI’s resignation.

Pope Francis, however, doesn’t just want to take it in and do his work. He shows he wants to keep in check those he thinks are his enemies. In the same conversation, he complained about a big TV station criticizing him and stressed that even if he may be criticized because he is a sinner, attacking the Pope in that way means attacking the Church, and that is “the work of the devil.”

These are words that leave various doubts. Pope Francis has said that anyone who disagrees with him may be working for the devil. So, there can be no criticism of the Pope’s work, and nothing can be disputed. And then, it remains to be understood who told the Pope that a Catholic TV station speaks ill of him, given that the Pope does not watch television by his admission. So if the Pope was talking based on things reported to him, would this not mean that he had somehow allowed himself to be involved in the terrorism of gossip?

However, what Pope Francis wants to demonstrate seems to be simply that no one can attack him without him noticing and reacting. After the surgery, in the interview with COPE, he had wanted to pick up the narrative of his health. Now Pope Francis has simply wanted to let people know that he was still in charge and is well aware of his enemies.

But which Pope, in his reform effort, had no enemies? How many silent wars have been fought in the past decades? Pope Francis, however, is not the type to take it in and move on. Thus, every next step will be destined to regain control.

Something has already happened if you think about the promotion of Archbishop Fernando Vergez Alzaga to president of the Governorate of the Vatican City State. Vergez is a loyalist of Pope Francis. It is to be determined how many faithful the Pope will put in the dicasteries following the reform of the Curia, and above all how many people who have a commonality of language with the Pope (the Italian weekly Panorama noted this predominance of Spanish speakers that is being created in the Curia).

Of course, Pope Francis cannot stop the machine of speculation about who will be the next Pope. He can, however, try to create a mechanism whereby he takes direct control of all information. And that’s what he’s doing.

3 Responses to Pope Francis and those Conclave voices