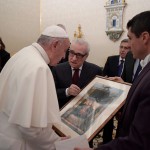 From Leonardo DiCaprio to Martin Scorsese, from “The Revenant” to “Silence,” Hollywood as usual feels the world’s pulse and shows how the Church is perceived, or at least the way the world would like to perceive it. It is probably not by chance that Pope Francis’s 2016 opened with a January 28 meeting with Leonardo DiCaprio – an ecological advocate, but above all an actor anxious to promote his new movie “The Revenant” – and closed with a meeting with popular director Martin Scorsese, who is going to release the movie “Silence,” an adaptation from a book by Shusaku Endo on the story an apostate Jesuit in the Japan of the anti-Christian persecutions.

These two movies have been widely discussed, and they shed light on some important aspects of faith, especially “Silence”. At the same time, both movies depict a Church that either is marginalized, considered a sideline of history or is not strong enough to confess the faith and give witness to it, remaining weak in the face of persecutions.

These are not trivial issues: they are the conditions “sine qua non” for understanding how the world wants to view the Church. Bishop Robert Barron, Auxiliary of Los Angeles and a well-known media personality, provided a vivid review of “Silence” in an op-ed posted at “Word On Fire”. In his article, he noted that the Church portrayed by the movie is a Church unable to fight to the bitter end.

The story behind “Silence” is well known. In the 17th century, two young Jesuits are sent to Japan, where the anti-Christian persecution is horribly bloody, to look for Fr. Christovao Ferreira, a Jesuit missionary and their mentor, who is reported to have committed apostasy. In the end, they discover that he really did commit apostasy, and that he lives with a wife that the State has given to him. The discovery happens in the midst of the pressures the two Jesuits are subjected to in order to force them to renounce their faith, pressures which include the crucifixion in front of them of Japanese Christians. The story focuses on Fr. Rodrigues. When he discovers that his mentor has committed apostasy, and while he faces the pain of Christians horribly tortured, he listens what he believes is the voice of Jesus which invites him to stamp on His image. He wills to do so, he wills to commit apostasy, and thus is portrayed in heroic tones as a ward of the State who like his mentor marries a woman chosen by the government.

That’s the point, according to Bishop Barron. Barron asks rhetorically whether the main characters would be depicted as heroes if they had not been Jesuits, but instead soldiers in a war, captured and tortured, soldiers who in the end renounce loyalty to their own country and choose to live a comfortable life among those who were once enemies. They would be depicted as traitors, not as heroes, Barron argues.

“My worry,” Barron insists “is that all of the stress on complexity and multivalence and ambiguity is in service of the cultural elite today, which is not that different from the Japanese cultural elite depicted in the film. What I mean is that the secular establishment always prefers Christians who are vacillating, unsure, divided, and altogether eager to privatize their religion. And it is all too willing to dismiss passionately religious people as dangerous, violent, and let’s face it, not that bright.”

The movie ends by showing Fr. Ferreira who wears a hidden crucifix, a sort of clue that he always remained Christian. But are such men as these really Christians? Is the reality of the martyrdom of Christians, firm in their faith, too complex, too seemingly inhuman to be accepted by people today?

Barron’s argument thus bears on many of the issues opened during Pope Francis’s pontificate. Francis is very much inclined to consider the role of human weakness and to emphasize the role of God’s mercy, which even St. John Paul II and Pope Benedict XVI deemed fundamental. In general, on the basis of human natural weakness and of the normal difficulties people have in facing many of the messy situations of life, Christian teaching risks to be sort of watered down. It’s as though Christians today are not able to embrace fully the teaching of the Gospel.

Is this really so? “The Revenant” can be of some help in formulating a response. The movie just fleetingly hints at the heroic epic of the Jesuits who evangelized North America between the 17th and 19th century.

The movie is set at the beginning of the 19th century, when large expeditions of trappers set out for the Northwest following the Louisiana Purchase in 1803. It is the era of the explorer and of the struggles with the Indian tribes. But it is also the era of important missionaries.

The movie does not talk about this. However, a clue can be found in one scene, when Hugh Glass, the main character played by Leonardo DiCaprio, dreams of his son, who was killed by a friend of his, mutely rising up from the ruins of a Catholic church.

What is a Catholic church doing there? It represents the forgotten story, that is, the role which a series of heroic missionaries, especially Catholics, and particularly Jesuits, played in the lands recounted in “The Revenant”. Moved by their wish to save souls, they quickly took hold in the culture of Native Americans, so much so that some historians maintain that only the rapidity and brutality of US expansionism prevented experiences similar to the South American “reducciones”.

Among the heroes are St. Jean de Brébeuf (1593-1649), St. Isaac Jogues (1607-1646) who, along with their companions, were killed throughout the territory of the current New York State, after evangelizing, baptizing and educating Native Americans. They endured huge sufferings. Fr. Jogues was captured by the Mohawks, imprisoned for one year, sent back to his country with the thumb of one hand amputated, returned to the States where he was captured again, by the Iroquois. They sentenced him to death: they burned him with burning coals, they broke one by one his bones, and then they cut off his nose, tongue, and ears, and his eyes were torn out.

In admiration of his sacrifice, the Iroquois ate his blood and heart, and the memory of these heroic saints was handed down from generation to generation. This seed flourished. The Iroquois moved west to the Rocky Mountains, and came to know that there was a Jesuit mission in Saint Louis. So, 150 years after the martyrdom of these Jesuits, the Iroquois remembered their courage and asked the Jesuits to send one of their members among their tribe. Belgian Jesuit Pierre-Jean de Smet (1801-1873) accepted. He traveled and lived in very difficult situations, and so won over the hearts of the Indians that the federal government appointed him as a sort of “ambassador” for relations with the Native Americans tribes.

Fr. De Smet’s track record was strong. In 1862, in Mankota, 33 Sioux out of 38 sentenced to death asked for the spiritual accompaniment of French Jesuit Augustin Ravoux (1815-1906), preferring him to a shaman of their tribes and to two Protestant pastors. In four days, the 33 Sioux learned to pray the Our Father, Hail Mary, Act of Contrition and Creed, and serenely faced death. Their calm was an example: the following year, 300 Sioux families asked Fr. Ravoux to visit them, and 200 of them were baptized.

This crucial story is not part of “The Revenant”, but it is part of American history.

This is how “The Revenant “and “Silence”, at the beginning and end of a memorable 2016, demonstrate how the secular world wants the Catholic Church to be: silent, weak, or – when strong – marginalized, obliged to be relegated to the corners of history rather than being the main protagonist of it.

The question is whether a Church like this, unable to overcome the difficulties of life, can be a prophetic Church. And an indirect answer is given by the history of the Church in Japan, especially by what happened after the period of history covered by “Silence”.

In Japan, the banishment of Christians was removed only in 1873, after 250 years of clandestinity. Japanese Christians will never forget that period. This is where the story of “Silence” is linked to another story.

The majority of native Japanese Christians settled in Nagasaki, where there was a flourishing Catholic community. They were decimated by the atomic bomb dropped on Nagasaki on August 9, 1945. Out of 12,000 Catholics, 8,500 died. By a miracle, the “Mugenzai no Sono” Monastery (the Garden of the Immaculate) was spared. The monastery had been founded by Fr. Maximilian Kolbe, before his return to Poland and his heroic death in the Auschwitz concentration camp.

The bomb created more damage than expected. It was supposed to have detonated in Nagasaki, but instead it detonated in the Urakama area, as there was not enough fuel for the scheduled route. This is the reason the Urakami Cathedral, then the biggest Catholic church in Asia, found itself just 500 meters away from ground zero.

All of the Catholic survivors interviewed after the destruction of the city remembered the exile of their grandparents from other regions of Japan, because of their return to the open practice of Catholicism after 250 years of clandestine Christianity. There are many stories to be told. Like that of the orphan Ozaki Tomei, who took this name in his novitiate in Fr. Kolbe’s monastery – an unusual choice for the Japanese who generally choose the name of a Western saint. But Ozaki Tomei chose the name of a martyr from the 1597 persecution who hailed from Nagasaki. Tomei recently turned 88, is a prolific writer on his blog, and has a strong capacity not to lose heart that she probably inherited from those Japanese missionaries who remained in silence, as Scorsese depicted them.

That silence was initially considered controversial, as it contributed to the notion that faith had not been lived. But this silence did not come only from clandestinity. It also came from apostasy, though Fr. Christovao Ferreira, the historical character that was an inspiration for Endo’s novel, returned to Christianity at the end of his life, dying as a martyr after his apostasy shocked the world in 1663.

Despite controversies, Catholics are still found in Japan, and they can look to heroic characters like Takayam Ukon, the so called “samurai of Christ,” recently beatified. Catholics survived through silence, and perhaps it is not by chance that at the end of the Second World War one target of the atomic bomb was the most Catholic city of Japan. It was almost a sign to prophesy the current persecution of Christians.

The Church of Silence, the marginalized Church, the Church of privatized faith is what the enemies of the Catholic faith wish for. However Christians – the Pope said during the December 26 Angelus commemorating St. Stephen, the first martyr – are “hated for the same reason that Jesus is hated: they bring light.”

The best wish for this upcoming year is to take Christianity out of darkness. To go beyond the Christian cultural inferiority complex which made secular history seem brighter. To become aware that Christianity forged the European identity, created human rights with Francisco de Vitoria and the Salamanca school, opposed slavery in the name of human dignity. Catholic faith is in the world, but it is not of the world. Now more than ever in recent times, the Catholic faith risks living in the catacombs, confined to small communities, as Joseph Ratzinger prophesied back in the 1969. This faith, however, has still the strength to shine, despite the way that public opinion and the entertainment empire keeps on depicting it.