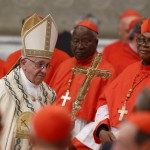 6 Responses to Pope Francis, any moves with a view to a Conclave?