Pope Francis, are we already thinking about the day after? 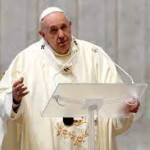 The veteran Vatican watcher Sandro Magister observed that a progressive detachment from the positions of Pope Francis is taking place. Magister gives us as examples two books recently released, “Il Gregge smarrito” by the think tank “Essere qui” and “La Chiesa Brucia” by Andrea Riccardi. Books that highlight how the situation of the Church today is that of a general crisis. The name of Pope Francis is never mentioned, nor is any responsibility placed on him for this crisis. However, it is clear that the triumphalist tones of the beginning of the pontificate are giving way to a different, more thoughtful reflection and that this reflection marks the beginning of the atmosphere of the end of the pontificate.

This end-of-pontificate climate was inaugurated by a particularly critical article by Alberto Melloni, one of the gurus of progressive and “Franciscan” Catholicism, who had not spared criticism of Pope Francis’ decision-making, pointing out some contradictions in the government of the Church by the Pope.

This climate became particularly acute when Pope Francis was hospitalized. The official versions spoke of an “acute diverticulitis” and a “planned intervention.” However, it is also true that initially, there was talk of five days of hospitalization, then of seven, and, in the end, Pope Francis remained hospitalized for ten days. The intervention was described as three hours long, and a piece of the Pope’s intestine was removed. There is no reason to doubt the official versions provided in timely daily bulletins by the Holy See Press Office. The information in these bulletins, however, cannot fail to cause concern.

It is, therefore, normal to start talking about the pontificate to come. It is expected that some hitherto uncritical voices are beginning to emerge sounding different.

Because, after all, the Vatican is a small world. Speaking well of the Pope works as long as you think you can get something in return from the Pope. When we realize we are at the end of an era, we speak with greater freedom, to express our concerns and, above all, to try to direct the debate towards the next pontiff.

It is now, and only now, that all the actual positions will come out of those who, during the pontificate of Pope Francis, have tried to silence all opposition by depicting it as resistance to the prophetic force of the pontificate and even as plots against Pope Francis

.The problem is that, while we are already thinking about the post-Pope Francis era, the pontificate continues, and the Pope continues to make decisions. In the coming months, the Pope will face some crucial issues, which could definitively undermine his credibility, but he could also use them to his advantage.

The first theme is that of Vatican justice. The “maxi trial” for the case of the investment of the Secretariat of State in a luxury property in London risks exposing the flaws in how the Pope has decided to administer justice. The process stems from a summary investigation ordered directly by the Pope, who was also aware of every operation. In addition, how the process was carried out has put international cooperation at significant risk. How will the Vatican judges proceed? Will they be informed by documentation, or will they exhibit an ideological bias in dealing with the issue? And how will the Pope come out?

The second theme is that of the government of the Church. Pope Francis has centered all decision making on himself, but he has operated in a non-institutional manner up to now. Moreover, he dismantled the institution. Pending the reform of the Curia, which is expected to be finally published in the autumn, the Pope has already proceeded to make the reforms himself, dismantling and rebuilding dicasteries and above all dispersing well-tested teams of men, effectively imposing what will be a rule of Praedicate Evangelium. All Curia mandates have a five-year term, renewable for only another five.

The third theme is that of managing people. There are no more teams because the Pope, in moving positions around, tends to divide everyone. But if the absence of teams, on the one hand, can avoid careerism or circles of power, on the other, there is the problem that there is a lack of continuity in decisions. There is no basic philosophy because no one can have one. Everything refers to the Pope and the Pope alone. What will happen if the Pope is unable to govern? Who will decide instead of him?

These issues are fundamental because they also directly affect the next conclave. De-institutionalization has led, for example, to not renewing the mandates of the members of the Apostolic Chamber. There is a Camerlengo, Cardinal Kevin J. Farrell, but it has never been reported that he was sworn in. If the Pope died suddenly, there would be a “formal vacancy” of power that should not be underestimated.

Then there are the more ideological issues. Many had positioned themselves in favor of Pope Francis, hoping that, being more pragmatic than his predecessors, he would be willing to change some things to meet the progressive demands. But, unfortunately for them, this has not happened so far. Aside from his position on social issues, which are pleasing to the left, the Pope has remained firmly on his positions on traditional matters.

Not only on abortion has the Pope always been crystal clear. The responsum of the Congregation for the Doctrine of the Faith on the blessing of same-sex marriages also tells of a Pope Francis who is much less progressive than thought.

Of course, Pope Francis is pragmatic. Yet he did not give that theological turn that the progressive wing expected. Instead, he paid more attention to some social issues; and he included a few more women in the Vatican organization chart, but without really changing much.

Ultimately, Pope Francis appears to be, for the progressive world, a transitional Pope. With his charisma and his decision-making, he is a Pope who led the Church towards the beginning of a new era. But, on the other hand, for the traditionalist world, Pope Francis is a parenthesis because the doctrine cannot be put aside, nor can the history of the Church, which is 2000 years old.

In the end, it won’t be easy to take stock of the pontificate of Pope Francis without being pulled to one side or the other. This will be true as well for the cardinals called to choose a successor. Cardinals whom Pope Francis, faithful to his divide et impera approach, never brought together for dialogue but gathered only to appoint new cardinals. In the end, the cardinals don’t know each other. And this will be decisive in the choice of the next Pope.

4 Responses to Pope Francis, are we already thinking about the day after?