Pope Francis, institutional Church or Church of the charity? Pope Francis: Toward Which Pontificate?

Pope Francis at the crossroads of History 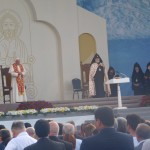 There is an anecdote that relates better than any other how Pope Francis tackles issues. Archbishop Khajag Barsamian, Primate of the Armenian Church in America, reported it. in a conversation with the author of this commentary. “Last year, before the Armenian-Rite Mass in St. Peter’s to commemorate the 100th anniversary of Armenian genocide, the Pope gave a lunch in Santa Marta for members of the Synod of the Armenian Church. We obviously talked about ecumenism. And the Pope said that theology was important, but encountering one another and praying were really crucial.”

Pope Francis perfectly epitomized this approach when he met the Grand Imam of the Al Azhar Mosque in Egypt, a key institution for Sunni Islam, and stressed: “Our meeting is the message.” This approach was demonstrated on many occasions, during his pontificate, for example, when he proclaimed a day of prayer and fasting for Syria in September 2013; when he hosted prayer for peace between Israel and Palestine in the Vatican Gardens in June 2014 with the aim of favoring encounter rather than promoting concrete steps; when he decided to meet the Russian Patriarch Kirill and to sign a joint declaration whose content he labeled as “pastoral”, though it was highly political.

This, for Pope Francis, is the “culture of the encounter”, a leitmotiv of his pontificate. However, this leitmotiv risks being wrongly interpreted as a “surrender” of the Catholic Church. If the trip to Armenia emphasized the pride of a people that has continually undergone martyrdom, and yet was never been bent by history and has never abandoned its Catholic faith, in Europe the Church seems to be surrendering, having almost been completely intimidated by the world that the Church is called by mission to shape.

The European issue is not insignificant. Recent facts prove that Europe is no more a safe haven for human rights, and that secularist thought is not only present, but even aggressive.

This is not news, as things have evolved step by step in this direction. The real news is that, in the name of the “culture of the encounter,” the Catholic Church is in retreat. Not back to the catacombs, or to build monasteries and thus create a new civilization. It retreats in order not to be in trouble with the secular world, not to be too noisy.

The profile of new bishops – Pope Francis’ real reform – somehow enables this retreat. The Pope wants shepherds with the smell of the sheep, people able to foster encounters rather than cultural warriors who make noise and fight against the current mentality. Pope Francis’ appointment of bishops in Italy shows a clear imbalance toward this new profile of bishops, as the Italian Bishops’ Conference agency Sir showed. The appointments of bishops around the world follows the same direction, though things might be perceived as more nuanced. However, the change of perspective is noteworthy.

Have a look at what is happening in Belgium. Archbishop Jozef de Kesel of Brussels has sent back to France the “Fraternity of the Holy Apostles” that his predecessor, Archbishop André Joseph Leonard, had invited to Belgium with the aim of fostering vocations.

Archbishop Leonard entrusted the Fraternity with the care of two parishes. According to Archbishop de Kesel, the parishes are well organized, and members of the Fraternity are able to “sensitize young people to the beauty of a vocation and to the ministry of diocesan priesthood.” Despite this, the Archbishop has decided that the Fraternity will have to leave the diocese and the country, because many of its priests are French. The decision was made notwithstanding the protests of the parishioners, who also requested a Vatican intervention. The Vatican has still not responded.

Again in Belgium, the local bishops conference “took note” of the government decision to cut the hours of religious teaching in schools, hours which are to be replaced with classes in civil education that – according to teachers who protested the decision – “is a formation in neutrality that is in fact designed as formation in anti-religious atheism.” Even in this case, the vast majority of students (the 97 percent) was in favor of religion classes. Belgian bishops decided not to take a stand, but just to “take note” of the government decision.

Even Spain has recently witnessed a retreat on the part of Catholics. There, Cardinal Antonio Canizares Llovera, Archbishop of Valencia after five years spent in Rome as Prefect of the Congregation for the Divine Worship, held a “lectio magistralis” at the Spanish branch of the John Paul II Institute for Studies on Marriage and Family. During the lecture, the Cardinal denounced the attempt to “impose a gender ideology through unjust laws that we must not respect.” The Cardinal also stressed that there is “an anti-family escalation promoted by top politicians, helped by other powers, such as the gay empire and some feminist ideologies.”

Clear and concise words that did not pass unobserved. So, LGBT groups protested and initiated a lawsuit against the Archbishop for having incited hatred against homosexuals and feminists – the court in the end rejected the lawsuit. The Cortes Valanciane, the local Parliament, followed up with a debate to censure the Archbishop’s lecture. On his side, Cardinal Canizares wrote an open letter to his Archdiocese, lamenting that he was being subjected to a summary execution and decrying the lack of religious freedom.

The Cortes also accused Cardinal Canizares of not to putting into practice Pope Francis’ teaching. The Cardinal reacted with indignation. He wrote: “They even manipulated the Holy Father to use him against me. I am not racist, homophobic or sexist. I accept everyone and I do not exclude anyone, since I firmly believe in the Lord. But I look for and proclaim truth and justice, even at the expense of being unpleasant.”

Even in this case, no one from the Holy See made a move to intervene. In the meantime, attacks against the Catholic Church in Europe multiply. There are not only bombings of churches in Pakistan, persecution in the Middle East, Christians killed in Africa; there are attacks in the heart of Europe, and they even become physical.

A review of the news over the last months reveals how big the phenomenon is. Fr. Benoit Delabre, a French priest, told the magazine La Provence that someone set fire to the altar of the St. Madeleine-de-l’Ile a Martigues church, about 800 km from Paris.

He also said that on May 15 the tabernacle of the Church of Jonquieres, in the same region, was profaned. Fr. Delabre himself was attacked by a man apparently caught while stealing something from the church.

These are not isolated facts. Gaby Charroux, Mayor of Martigues, emphasized in a press release that “theft of various kinds of the Church in France are becoming more frequent.”

Catholic institutions are also subject to criminal hacking: according to La Croix, more than 100 websites of churches and religious congregations were attacked by hackers, allegedly members of the Fallaga Team that are Tunisian cyber-Jihadists.

The same thing is happening in Belgium: on the afternoon of May 24, two fires were set to the Church of Mont-Sainte-Genevieve that dates back to the 16th century.

These reports are not mentioned by large media outlets; nevertheless, they are an alert that must not be undervalued. There is a hidden martyrdom of Christians taking place in Europe that cannot be underestimated.

But rather than tackling difficult situations, the Holy See maintains a strategy that favors “encounter”. No one in Armenia expected that once in Armenia, the Pope would label the Armenian massacre a genocide, as he did in fact. Instead, the Armenians said they were satisfied that the Pope had already mentioned the genocide on a previous occasion. The Pope’s first mention of genocide came after he had talked with friends of the Armenian Church, since – as Sandro Magister noted – the Pope used the paraphrase “systematic annihilation of a people” in the speech he delivered to the members of the Armenian Synod just three days before the celebration of the Armenian Rite divine liturgy in the Vatican, when, for the first time, he used the word genocide.

If it can be said that the Pope prefers pastoral work, the Vatican Secretariat of State prefers to work behind the scenes. This is how diplomatic relations with Turkey were restored, after the freeze that followed the Pope’s remarks on genocide. This is how the Vatican is silently working on relations with China, while it promotes reciprocal concessions so that the Pope fulfill his dream to be the first Pope to travel to Beijing. This is how ecumenical relations have developed so successfully that Cardinal Kurt Koch, President of the Pontifical Council for the Promotion of Christian Unity, did not accompany Francis to Armenia, but was sent as an observer to the Pan-Orthodox Council in Crete.

But Francis’ pontificate is not centered on any grand themes; instead, personal encounters are praised. Curial and other Vatican appointments seem stalled; the Pope is apparently isolated, while in the name of the dialogue, he makes controversial statements that foster debates among the faithful. Theological discussion is reduced to a competition between the Pope’s supporters and opponents, with no direct reference to the issue raised (the excuse being that, because of his clear statements, Cardinal Gerhard Ludwig Mueller, Prefect of the Congregation for the Doctrine of the Faith, has been marginalized).

In the meantime, the Church is under attack, a datum that is overlooked by the same secular world that simultaneously praises Pope Francis.

Pope Francis is at the crossroads of history. He will have to make the decision whether to go on with the culture of the encounter or to take a new direction with a strong position that transcends mere closeness to the faithful. Perhaps he will be inspired by the Armenian people.

After the horrible massacre, Communist rule generated even more fatigue in the population. Over 70 years, Christians lost their leadership, since shepherds feared to take a strong stance and the faithful felt too tired to defend publicly the Church they believed in. For Armenians, it is now time to rebuild a generation. In a nutshell, the Catholic Church is called to do the same thing.

3 Responses to Pope Francis at the crossroads of History