Pope Francis, between doctrine and government 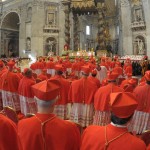 The announcement of a consistory for the creation of 14 new cardinals did not come completely by surprise. For some time a consistory in June was expected, since there were six slots to get to the limit set by Bl. Paul VI, and confirmed by St. John Paul II, of 120 cardinals eligible to vote in a conclave.

John Paul II, in fact, made some exceptions, as Pope Francis has. With the next consistory, there will be 125 Cardinals eligible to vote in a Conclave. However, the number will soon decrease to 122 voting cardinals, as 3 will soon turn 80.

Certainly, with this consistory Pope Francis gave the college of cardinals his final imprint: after June 29, there will be 59 cardinals created by Pope Francis, compared to 46 created by Benedict XVI and about 20 created by St John Paul II, eligible to vote in a Conclave.

Five Pope Francis’ consistories have provided the best overview of the Pope’s idea of Church.

After five consistories, there are 87 countries represented in the conclave, following the rationale that all the possible geographic areas need to be represented.

In general, there are just a few dioceses that are traditionally a cardinalatial seat with a Cardinal Archbishop (there are exceptions, like Barcelona). On the other hand, there are dioceses and countries that were granted a red birretta because of their particular situation. Among the dioceses in Italy, L’Aquila was awarded one because it is still enduring the consequences of the 2009 earthquake. In the past, the Archbishop of Agrigento, that includes the island of Lampedusa, which is the migrants’ first landing ground in Italy, was given the red birretta.

Looking at the countries, this consistory recognizes Iraq and Pakistan, while Syria was recognized in 2016.

Another tip: the profile of new cardinals mirrors that of bishops chosen by Pope Francis: they are shepherds, more than intellectuals, with the character of a parish priest rather than a bishop. They stick to the notion of the “shepherd with the smell of the sheep” Pope Francis has outlined since the beginning of the Pontificate, and that is the focus of his real reform: that of the profile of bishops.

The reform of the profile of bishops, and as a consequence that of the choices of new cardinals, is linked with what could be considered the other real focus of Pope Francis’ pontificate: that of governance.

A big part of the discussion around the Pontificate has focused on issues of doctrine, especially after the publication of the exhortation Amoris Laetitia and the fact that many bishops interpreted the document in the most liberal way possible. For this reason, the theme of governance has been overshadowed. However, it is one of the main aspects of the pontificate.

For what concerns doctrine, it is unlikely Pope Francis will be willing to change it. More likely, he will open a merciful approach, as he did on pastoral care based on life experience – an approach that can sometimes become too concrete and pragmatic. Beyond that, there is always a way to apply mercy following doctrine, as Archbishop Charles Chaput well explained when he published the Amoris Laetitia guidelines for his archdiocese.

In addition, it is worth noting that Pope Francis actually says things that are the contrary of what it is reported that he says. Juan Carlos Cruz was one of Fr. Karadima’s victims in Chile, and was received by Pope Francis together with other victims. In some of the interviews after the meetings, he said that he confessed that he was gay to Pope Francis, and that the Pope said that God loves him the way he is. These words have been considered the umpteenth Pope Francis’ endorsement of the gay community. It was almost a perfect move, as Pope Francis’ words were spread while Father James Martin’s book “Building bridges” was published in Italian edition.

During those very days, Pope Francis was meeting the Italian bishops gathered for their annual general assembly. In a closed-door meeting, speaking about vocations, the Pope asked Italian bishops to pay special care to the quality of the future priests. He also mentioned the case of homosexual people who wish to enter the seminary. The Pope reportedly said: “If there is a minimum doubt, it is better they do not enter.”

Even in the letter the he had given for meditation to Chilean bishops during their first day of meetings at the Vatican, Pope Francis accused bishops and religious superiors of having “delegated leadership to priests suspected of practicing homosexuality.”

Beyond these doctrinal statements, Pope Francis has also a modus operandi that comes into play in his governance. And this is another key issue.

The Chilean Bishops case is revealing. Following the investigation the Pope requested, admitting that he made a mistake, Pope Francis convoked all the bishops from Chile and gave them a text for meditation. He listened to them, but he had not started any kind of trial or similar procedures. During the Irish pedophilia crisis, Benedict XVI convoked the Bishops and then sent an apostolic visitation. In the United States case, U.S. Bishops met with the Pope and officials of the Congregation for the Doctrine of the Faith, that administers justice.

After three days of meeting, the Chilean bishops resigned. It was probably a way to urge the Pope to make a decision. A slap in the Pope’s face, some said. In fact, bishops also need justice. There are bishops who did not connive, nor were they involved. No one mentioned that.

The same happened in Germany, when the issue of the access to communion for Protestants in particular cases was raised and proposed at the German Bishops’ Conference general assembly. Seven German Bishops opposed it, and the Pope called a meeting in Rome with some German Bishops and some officials of the Congregation for the Doctrine of the Faith to discuss the issue. At the end of the meeting, no decision was made: the Pope asked the German Bishops to find a unanimous point of view.

This modus operandi that seems to force collegiality is combined with Pope Francis’ profile as a decision maker who hardly ever reconsiders the steps he takes. Pope Francis proposes the image of the Pope as guarantor, above everything. This is what he did at the Synod of Bishops, when he asked for “parrhesia”, frankness. This is also what he did when he took a firm position about media reform in the letter that accepted Msgr. Dario Edoardo Viganò’s resignation as Prefect of the Secretariat for Communication and at the same time confirmed him in the dicastery’s ranks as number 3.

How is all of this connected with the new profile of bishops and cardinals?

The new bishops and cardinals are more eager to embrace pastoral work than governance, and would not appear to be themselves the best candidates for a high profile governance structure.

Spiritual care is particularly important. This is one of the great skills of Archbishop Angelo De Donatis, the Pope’s vicar for the diocese of Rome and soon to be Cardinal. Archbishop De Donatis kept a pastoral profile even when he inaugurated the Lateran Pontifical University’s academic year.

Pope Francis’ Church profile is that of a traditional, but not a traditionalist, Church; bound to doctrine but pragmatic as much as it is needed to go beyond doctrine; not decisive on governing issues as long as the Pope does not take a sharp stance; and out of the cultural struggle, which has been replaced by the spiritual care, Pope Francis’ real priority.

So much of a priority that Pope Francis should soon appoint a new auxiliary bishop in Rome with the specific responsibility of spiritual issues. So much a priority that the Third Section of the Secretariat of State was born with this objective, and that this was the first objective given to Archbishop Vergez when he was installed as new secretary of the Vatican City State administration.

In the end, the governance issue is still key, as this pontificate has reinvigorated the push for the new evangelization. This issue is combined with the issue of image portrayed by the media. The media puts pressure on the Church, as some theologians and bishops do, carrying forward a discussion that has been going on since the Second Vatican Council.

There has always been a hidden agenda, already operating under Paul VI, continued during John Paul II and with some impact under Benedict XVI. Now, this agenda is in full fledge in Pope Francis’ pontificate. The only way to confront it will be with a strong action of governance.