Pope Francis, a consistory with view to the next conclave Pope Francis and the Independence of the Holy See

Pope Francis, between informality and a Latin American Perspective 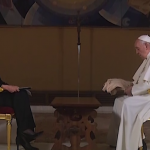 Pope Francis’ alleged declarations backing homosexual civil unions, featured in a documentary film, have generated a lively discussion. Some spoke about a plot to manipulate Pope Francis’ words, while others dated the plot back to when these words were uttered. The film does not include an original interview with the Pope. It shows unaired segments of an interview Pope Francis granted to the Mexican television station “Televisa” in 2019. The segments in the film had been left out of the television interview. So, Vatican communications might have plotted to censor Pope Francis’ words.

Notwithstanding its many interpretations, the story is a key to understanding Pope Francis’ pontificate and the expectations around it.

There are many items to reflect upon.

First item: Pope Francis always speaks referring to the Latin American context. In the film, he talks about the law for couples living together, which is different from civil unions. Pope Francis asks for a law to safeguard these couples’ rights, also homosexual couples’. On the other hand, Pope Francis is in no way ok with homosexual marriage or other forms of marriage-equivalent recognitions.

Speaking about a bill for couples cohabiting, Pope Francis thinks of the Latin American world. Pro-family activists are pretty strong in Latin America, and very vocal. They know that any opening might be considered a highway toward gay marriage; that is the final goal of LGBT activists.

Pope Francis has a different approach. He likes to dialogue, anyway and at any cost. So, the Pope looks for a middle way: a bill for cohabiting couples that could guarantee the rights of homosexuals without any provision that could be compared to gay marriage. Pope Francis’ rationale comes, first of all, as a response to that situation.

Second item: Pope Francis often speaks in personal terms. It is widely thought that a pope speaks for the universal Church. For this reason, those who became pope slightly changed their way of expressing themselves and speaking out.Benedict XVI understood that the hard way when he had to face the reactions to his Regensburg speech. After that, he adapted his lectures to the office he represented, even if keeping room for some freedom (e.g., the publication of the volumes Jesus of Nazareth).

On the contrary, Pope Francis thinks like a leader. Since he is the leader, he has no fear of saying what he thinks, with no filters and without thinking of the consequences. Pope Francis’ vision as a leader stands above the institution. His words are not magisterium, nor he presents them as such. He speaks on personal terms. Some can twist his words against him or the Church. Pope Francis does not seem to care about that.

It is a theme that goes beyond an alleged manipulation of Pope Francis’s words. Evgeny Afinkeev said that the information on civil unions was for him, but all the clues show that it is a segment from a Televisa interview. In that interview, Pope Francis also complained that the media made him say things about homosexuality he never said or thought. In addition to that, when the Pope spoke about the family, he was addressing homosexuals’ rights to remain in their families. That is a right of everyone not to be discriminated against or rejected by their own families. Providing the context might have helped. Vatican communications did not do so.

Finally, the question remains: what does Pope Francis think? Why does he say everything and the contrary of everything? Why does he not take clear positions on some sensitive themes? Why did he not want the journalistic reports to be corrected?

The response to these questions is simple: Pope Francis is not like that. He can accept that people attribute to him contrasting thoughts because some leaks can help him manage his image and public opinion. Pope Francis’ papacy is centralized but informal; media-friendly, and yet always watching out for the media.

Bottom line, there will be no Holy See declarations on what Pope Francis meant, while the movie director was honored with an award in the Vatican gardens and met with him on his birthday. These clues show that some confusion is welcomed.

Looking more in-depth, this episode denotes a certain naivety by Pope Francis in his way of talking, and the existence of particular prejudices (positive or negative) in understanding his words.

It is human. It is understandable. But it does not help the Church.

One Response to Pope Francis, between informality and a Latin American Perspective