Pope Francis: What is the Real Enemy? Pope Francis, a double-faceted government?

Pope Francis: Between Reforms and Diplomacy 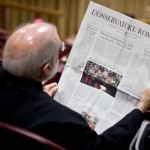 It was Cardinal Pietro Parolin, the papal Secretary of State, who proposed the most important reform of the Secretariat of State in a speech delivered at the Pontifical Gregorian University. Parolin proposed the establishment of an “office for mediation” within the Secretariat of State, as had already happened in the past. The office was supposed to be dedicated to possible diplomatic mediations.

Was that proposal a signal that the Secretariat of State will aim all the more at fostering international diplomacy? Possibly. While it is true that the Secretariat of State has until now kept almost all of its prerogatives (including the coordination of Vatican dicasteries), it is also true that it lost some of its responsibilities – at least in the communications branch.

On December 21, new appointments concerning Vatican communications were released. Greg Burke, who had been serving for three years as the State Secretariat’s advisor for communication, was appointed Deputy Director of the Holy See Press Office. He replaces Fr. Ciro Benedittini, who has reached the retirement age.

Stefano D’Agostini, who spent all of his career working for various popes, was appointed the new Director of Vatican Television. Formerly head of the technical staff, D’Agostini will be called on to manage de facto technical issues, while the control of the contents and of the image delivery will remain in the hands of his predecessor, Msgr. Dario Edoardo Viganò. Msgr. Viganò is now Prefect of the Secretariat for Communications.

Greg Burke is an American, and so he is sensitive to Anglo-Saxon press moods and rhythms. At the same time, he reassures the business world in this delicate moment that reforms are indeed taking place. Anglo-Saxon media often highlight a sort of difference between the old men of the Curia, described as “too Italian” in mentality, and a more manager-oriented Curia, tailored according to Anglo-Saxon criteria.

The narrative over the reforms of the Holy See swings between these two poles. They are obviously two extreme point of views, and they don’t include all the nuances of the current situation. True, a robust reform of the Holy See’s economic-administrative structure was needed, as well as of the organization of the Roman Curia. Everyone was conscious of this.

Benedict XVI set the foundation for this reform by providing it with a juridical framework. For the record, Benedict XVI fostered the reform to promote Vatican financial transparency, the reform of the statutes of the Prefecture for Economic Affairs, the revision of the Vatican City State penal code (the reform was then finalized by Pope Francis), and the reform of charities (with new statutes for Caritas Internationalis and the motu proprio Intima Natura Ecclesiae). Benedict XVI also made a first attempt to streamline Vatican dicasteries: for a while he placed the Pontifical Councils for Culture and Interreligious Dialogue under a single President, and he did the same for the Pontifical Councils for Justice and Peace and Migrants.

Reforms had to take into account the peculiarity of the Holy See, which is a sovereign State. The Holy See is not a company with a marketing department and the need to show its balance sheet to the world. It is a sovereign State, which is called – like every other country – to adhere to international standards, in order to be credible among nations. But for the sake of the same credibility, it has to behave as any other sovereign State. Proof that this is so comes from the so-called Vatileaks 2 trial that is taking place in the Vatican.

In this scenario, the Secretariat of State gained a major role. At the beginning, all signals showed that Secretariat of State was likely going to be dismantled. But at this moment, it has taken upon itself the role of guarantor of the transition, holding on to its other competences, and at the same time intensifying its diplomatic competence.

Among the new appointments, there is some noteworthy detail. Alberto Gasbarri, who has been serving as “papal tour operator” for the last ten years, will retire in February, after Pope Francis’ trip to Mexico. Director of Vatican Radio Administration, Gasbarri will retire because he will turn 70, the official retirement age. As papal tour operator, he succeeded Cardinal Roberto Tucci. When Cardinal Tucci began to organize John Paul II trips, he was president of Vatican Radio.

Gasbarri will be replaced by Msgr. Mauricio Rueda Beltz, a Colombian and an official of the Second Section of the Secretariat of State, who served in the US and Jordanian nunciatures.

However, this reading might also be erroneous. According to Gianfranco Svidercoschi, a veteran Vatican watcher who was also Deputy Editor of L’Osservatore Romano, the transfer of competences for the organization of the papal trips is “almost natural,” and “was not a task Vatican Radio was charged with in exclusive terms.”

Vatican Radio played a major role in the organization of papal trips because “when a successor to Archbishop Paul Marcinkus, who was overwhelmed by the IOR / Ambrosiano scandal, had to be found, it was natural to pick Fr. Tucci, as he was John Paul II’s friend and confidant, and also talented and diplomatically refined. When later a successor to Fr. Tucci had to be found, it was also natural to pick Gasbarri, as he had been Fr. Tucci’s deputy for years.”

In the end, the choice fell on a man from the Secretariat of State because diplomatic skill is needed to carry on the organization of papal trips. The papal tour operator must be sensitive enough to arrive at an agreement that satisfied all the local bishops’ requests and the Holy See’s needs.

This is how Holy See diplomacy will assume an even greater role in managing the Pope’s agenda, while the Secretariat for Communications will manage the contents of the Pope’s messages. The final transfer of competences might in the end come about easily.

The Secretariat of State is due to increase its diplomatic activity. How will that work? Much will be clarified during the speech the Pope will deliver on January 11 in the presence of the diplomatic corps accredited to the Holy See. By tradition, the Pope’s speech to the ambassadors is his first official discourse of the year. It represents the barometer of the Holy See’s diplomatic activity. More than likely the Pope will ask for a major advancement of interreligious dialogue. This effort can be seen in terms of January’s monthly prayer intention. The universal prayer intention asks that “sincere dialogue between men and women of different religions might bear the fruit of peace and justice”.

Are there really slots for further international trips by Pope Francis? Perhaps. He cancelled all the trips within Italy because of the Jubilee (in fact, only a visit to Milan was already scheduled), but he did not say anything about international trips. He will go to Mexico February 12-19, and to Poland for the World Youth Day at the end of July. The French press agency I-Media noticed there are some slots in the Pope’s agenda where surprises may yet be announced.

Scrolling through the schedule of papal events provided by the Prefecture for the Pontifical Household, I-Media noticed that the May 22 Angelus, the June 22 general audience and the June 26 Angelus are “cancelled”. Does it mean – the French agency asks – that the Vatican thinks the Pope will make a visit to some European country like Kosovo? And should the fact that two consecutive events are cancelled in June be a tip that the Pope might visit Armenia, as he already promised?

These possibilities will provide a test for the new link between Vatican diplomacy and Vatican communications. Undoubtedly, it will be an interesting year.