Vatican communications evolve in Francis’ image. Can this eventually help Benedict? From external consultants to consultants from within. Is Pope Francis becoming “institutional”? 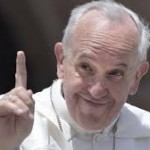 The Roman Basilica of Saint Paul Outside the Walls has been entrusted to Benedictines for 1300 years. There was such a strong tradition of ecumenical dialogue there, that Benedict XVI ultimately decided to give the basilica a specific mandate to promote ecumenism. Popes have been concluding the Week of Prayer for Christian Unity at this basilica for many years. Pope Francis went there last January 25. John XXIII had been to Saint Paul Outside the Walls on January 25, 1959. In that occasion, he announced the Second Vatican Council.

This is the reason why some thought that Pope Francis would have used the 55th anniversary of John XXIII’s announcement, to announce a Third Vatican Ecumenical Council.

Years later, John XXIII recalled the discussions about a new Council, and how his experience as a diplomat in Turkey, Bulgaria and especially France informed his decision. When he spoke about the “Curiali” who maintained there was not enough time to prepare for a new Council, John XXIII asserted: «They have never been outside.»

In fact, the possibility of a Council was already floating within the Vatican Walls. Pius XI started working on a Second Vatican Council in 1922, and then dropped the idea, in favor of first finding a solution to the “questione romana”, i.e. the political dispute between the Italian government and the Papacy since the fall of Rome to Italian unification in 1861. Pius XII requested a preparatory document for a council, and then decided the time was not right and used the ideas developed in the document as text for his speeches.

Writers, intellectuals, and prelates outside the Vatican Walls now perceive the possibility of a new Council.  For instance, Monsignor Celso Costantini gathered some thoughts in writing, later entitled The Council. On the convenience of convoking an Ecumenical Council. «An alleged italianisation de l’Eglise (Italianization of the Church, editor note) is something that has been talked and been written about» Costantini said.   «An ecumenical council would dissipate at once all these dark clouds, showing to the world, including those who are indifferent or hostile to the Church, the features of the Church, its unity and Catholicity, its apolitical character and sanctity.»

Words like these still resonate today. When Pope Francis was elected Pope, there was a lot of talk about an Italianization of the Roman Curia. Benedict XVI’s penultimate consistory was mostly to create Italian cardinals holding posts in the Roman Curia, and this fueled the perception of the «Church’s Italianization.» Partly in response to this criticism, Benedict XVI convoked a second consistory to create just seven new cardinals, all of them coming from outside Europe and none of them members of the Curia.

The criticism was really about the centralism of Rome, considered to be too far from the peripheries. The push for a reform of the Church that led to the choice of Jorge Mario Bergoglio as Pope came from this desire of the peripheries to be main players in the life of the Church.

Yet the centralism of Rome came from the Second Vatican Council. When John XXIII died, Cardinal Giovanni Battista Montini earned the broad support of the college of cardinals because of his personal prestige and above all for his commitment to carry forward the Council toward its intended goal.  That goal was to support innovation on the basis of a united Church, centrally coordinated so that it would not become dispersed and lose ground.

Paul VI worked for this unity, while being a strong innovator. We should not forget that Paul VI was the first Pope to celebrate Christmas Mass outside Saint Peter’s Basilica, in the peripheries (the most moving celebration was that at the siderurgical industry Italsider in Taranto), and that he created cardinal a parish priest, who then continued to be parish priest, something unheard of in the modern history of the Church.

Strongly rooted in the Church Tradition and in Ignatius of Loyola’s rule, Pope Francis is also probably thinking about a big council to break the routine. But not in the way we are used to think about it. He recently made it clear that he does not like the «it has always been done like this» as a guiding principle for a way of life. This is evident in his choice of new cardinals; the emphasis on an intense pastoral outlook; and the homilies he holds every morning at the Domus Sanctae Marthae, which are full of references about how much he detests gossip and scandals.

Pope Francis wants a demundanized Church, and at the same time he is an authoritarian Pope, personally making the final call on most decisions. He will probably do the same with respect to the reforms needed to modernize the «operation» of the «Church machine.»

In fact, reforms were already taking place. On holy communion for divorced Catholics who remarry, Benedict XVI had already started looking into the possible nullification of marriages on the basis of lack of faith, when he was Prefect of the Congregation for the Doctrine of the Faith. Pope Francis institutionalized the fight against the sex abuse scandals announcing the establishment of an ad hoc commission selected by the Council of Cardinals, but Benedict XVI was already fighting the sex abuses before him. The Curia reform has been a «hot topic» for years, and the only proposals about it seem to be mostly «cosmetic,» not really addressing the problem. One example is the discussion about the institution of a Congregation for the Laity, or that for a sort of a Vatican ministry of finance (this latter proposal does not take into account that the Prefecture of the Economic Affairs already has tasks similar to those of a ministry of finance).

Thus, the discussion seems to be far from a Third Vatican Council. John XXIII conceived the Second Vatican Council together with (not isolated from) a synod for the dioceses of Rome and a reform of the Code of Canon Law. These were concrete and structural reforms, which went beyond exchange of views in the hall rooms and responded to a precise vision of the Church, both at a government and field levels.

Not by chance, Archbishop José Rodriguez Carballo, Secretary of the Congregation for the Institutes of Consecrated Life, spoke about a possible reform of Canon Law at a convention about vocations. And not by chance the Council of Cardinals said from the very beginning that its true aim was not to make some slight modifications to the Pastor Bonus, the Pastoral Constitution that regulates the Curia’s functions, but to substantially rewrite it.

Martini had often been linked to the idea of a Third Vatican Council. In fact, Martini spoke often about a sort of “periodic meetings” on specific themes, a broader consultation of the synod of bishops, and not an ecumenical council tout court.

Pope Francis seems to be following Martini’s path. His first focus has been the family, since the family is always under duress in today’s society. How can the family survive secularization? How can the Church still have something to say to families?

Thus, the family will be the topic of the extraordinary synod to be held in October 2014, and also of the ordinary synod to be held in 2015. Moreover: On February 22 Pope Francis will celebrate the next consistory for the creation of new cardinals. The two days prior (February 20 and 21) Pope Francis will hold a general consistory dedicated to the family. And the Council of Eight Cardinals will focus on the family as well, during their next meeting, scheduled for February 17-18. The following week, Pope Francis will take part in the Council of the Synod of Bishops in preparation for the next extraordinary synod. Pope Francis would also be thinking about how to reform the Council in order to give more weight to the peripheries. This is where a lively and real Church is, according to Pope Francis. This schedule supports a notion of a sort of informal, permanent consultation.

Differences of opinion are normal during a consultation. And sometimes the media is used to air these differences publicly. It happened during the Second Vatican Council, when the Council of the media overshadowed the real Council. And it is happening now, with Cardinal Oscar Andrés Rodriguez Maradiaga, the coordinator of the Council of Cardinals, criticizing Gehrard Ludwig Müller, Prefect of the Congregation for the Doctrine of the Faith. Müller wrote an article on the Vatican daily L’Osservatore Romano reiterating the doctrine of the Church on divorced Catholics who remarry. Maradiaga’s message is to «be more compassionate, not (just) to think if it is right or wrong.»

But Pope Francis also needs people like Müller to support his notion of a permanent and informal council. In the end, there is always a need for someone to hold the line and uphold the truth, avoiding misunderstandings. A person like Müller can underscore that the Church «is not a federation of national Churches or a global alliance of confessionally-related ecclesial communities with the Bishop of Rome as an honorary president» as a matter of tradition.  The Church is what «testifies to, and realizes, the unity of peoples in Christ.» Church unity, Archbishop Müller said in Spain, comes from Christ, who established the apostles and their successors. Müller added that nationality, language and culture are not «constitutive principles» of the Church. This vision would end in «a secularized and politicized Church, only slightly different from an NGO.»

This is a clear message, coming at the end of the Week of Prayer for Christian Unity. In the end, if the Church is not united within its own ranks and merely speaks about itself in political terms, there cannot be any push for ecumenism. Pope Francis has always defined himself as «bishop of Rome» and this has fueled great ecumenical expectations. But he knows that the Church cannot be reformed if it does not regain first its internal unity. A viewpoint that was clear in Pope Benedict’s mind as well. This is the reason why Benedict worked to unite all parts of the Church, including traditionalist factions. And this is the reason why Benedict denounced the rapacious behavior («bite and devour») which impeded the Church to be united.

Following this path, Pope Francis has said that «the first reform is that of attitudes.» Let’s see if Pope Francis will follow Martini’s utopia or Roncalli’s.

5 Responses to Pope Francis, between Roncalli’s and Martini’s utopias