The real Pope Francis and his real enemies To Go Where God Is Needed: Pope Francis’ Criterion for European Trips

Pope Francis, Between the Shadow Synod and a New Direction 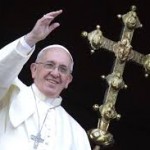 The past week began with a sort of “shadow synod,” that is a gathering of members from the Swiss, French and Germany Bishops’ Conferences dedicated to the issues to be discussed at the coming Synod of Bishops. Media representatives admitted to take part in the event were very few, and those few were told not to quote by name any of the speakers, and they were allowed only to summarize the discussions, not to quote them at length. Participants were obliged not to talk to the press, although some of them – in an attempt at normalization – later granted interviews in which they maintained that the meeting was the normal occurrence of the annual meetings of the Swiss, French and German bishops. Some sources speculated that the final goal of the meeting was to produce a theological document to be published in September – so close to the opening of the Synod that there would be no opportunity to open any discussion – in order to push the most progressivist ideas for the Synod to the top of public opinion. This need to produce a document shows in fact that the progressivist world is feeling nervous, even though at the beginning they hoped that Pope Francis would promote their ideas. This world risks profound disappointment.

This week, for the sixth consecutive time, Pope Francis spoke about family at the general audience. And on May 28, while meeting the bishops of the Dominican Republic who were making their ad limina visit, he asked the bishops to support the traditional family, and added an appeal that they defend the teaching of Catholic Religious Education in schools, and not allow it to be watered down with courses giving a vague treatment of morality or of the history of religions. The latter was by now a conventional topic in religion classes, since the progressivist theology maintains that the teaching of the Catholic religion in schools does not mirror the reality of the multiplicity of religions which are also found even in Catholic countries. This progressivist notion is also used to counter polemically the 2002 Declaration of the Congregation for the Doctrine of the Faith “Dominus Jesus” on the unicity and universality of salvation in Christ and through the Catholic Church.

But there’s more. A referendum took place in Ireland on May 22 asking citizens to express their views about a change of terminology in that part of the Irish Constitution regulating marriage. If the ‘Yes’ vote were to pass, gay “marriage” was to be introduced in Catholic Ireland. And the ‘Yes’ vote did pass, even though about the 40 per cent of the Irish voted against it, a huge bloc, given that all news media and social media, along with advertising outlets, American multinational companies and almost the entire Parliament had campaigned in favor of ‘Yes’. Commenting the outcome of the referendum on May 26, at the end of an international meeting of the Foundation ‘Centesimus Annus’, Cardinal Pietro Parolin, the Vatican Secretary of State, said that it represented “a defeat for humanity.”

Tough words that sounded strange since they were voiced by a man who finds his strength in diplomatic prudence. These words were also not welcomed by those of the progressivist wing (the part who might be identified as personalists)  who look toward Cardinal Parolin as a possible “establishment” candidate for the next papacy, in case no renowned name were to surface, and the search were to turn instead toward someone – even a paper pusher – in whose hands the government of the Church would nevertheless be secure.

Not just the future conclave, but rather the way the Church addresses the world is at stake now. The Irish referendum was a strong warning. The warning alert was in fact already sounding in 2010 when the Irish Church was struggling with the pedophilia scandal, and Benedict XVI – in a memorable letter addressed to Irish Catholics – stated that the real and profound problem was that the Church in Ireland had given in to secularization, and that it was incapable of fostering ways of devotion and veneration such as frequent confession and forms of popular piety, practices that after the Second Vatican Council it had abandoned in favor of a misinterpretation of the notion of mercy – an interpretation that detached mercy from justice (and the application of Canon Law).

Benedict XVI’s analysis, which did not just deal with the Irish Church, but with the whole Church, was lucid. This misinterpretation of mercy is now guiding the Synod’s discussion on the family. The discussion is still zeroing in on details, such as the access to Eucharistic communion for the divorced and remarried and the pastoral care of homosexuals. The final goal is certainly a sort of rejection of “Humanae Vitae”, Pope Paul VI’s encyclical on life and birth control that was savagely attacked by progressives. Not by chance, one of the interventions at the shadow synod, much promoted by the few media representatives present, was about the sexual needs of the human being; the following step is the opening to contraception – precisely the opening that Paul VI did not allow.

Even at the time “Humanae Vitae” was being drafted, pressures in the papal-appointed, internal commission to alter the doctrine were many. Some of the committee members recounted how the progressives tried to steer the debate, and then leaked information to the media in order to stir up public opinion in favor of their ideas. Paul VI took the contrary decision, in the face of huge pressures, but nevertheless aware that the Church was called to be in the world, but not of the world. Paul VI was conscious that holding out against the pressures of secularizing trends was the first step the Church had to take in order to be present in the world, yet able to proclaim the truth about the human being.

The “Shadow Synod” seemingly retraces the same dynamics of the period after the Second Vatican Council. Not by chance, the German, French and Swiss Bishops’ Conferences were the most active in pushing for an adaptation of doctrine according to the signs of the times. Not by chance, the conclusions of last Monday’s meeting were provided by Cardinal Reinhard Marx, who is among the strongest supporters of a doctrine that is “suited to the times” and to the slogan, “The language of the Church is not that of exclusion.”

The core issue is that these discussions use secular terms, instead of the Church’s. Cardinal Robert Sarah clearly identified this problem in a talk at the Lateran University last week. In the end, it is the same glossary of terms used by the United Nations and the UN bodies, as, for example, when in UN reports about the Convention for the Rights of the Child and the Convention Against Torture, the organization subtly asked the Catholic Church to change its doctrine.

The truth is that the progressivist wing is greatly agitated, and the shadow synod is proof. It is a fact that Pope Francis has always defended the traditional doctrine on the family, and has publicly addressed gender ideology. True, he fostered a discussion, but he probably always knew which side he was on. Even during the famous presser during the flight back from Rio, he said that he is “a son of Church.” Beyond allowing a possible vagueness in language, the Pope will not provide any doctrinal shock.

Nor will the bishops. Step by step, the composition of the coming Synod is being designated, and the majority of bishops’ conferences are choosing bishops with a clear traditional vision, albeit one also showing strong pastoral sensitivity. Progressives are also worried about this: they already had to give something up at the Synod last October, after a loud protest against the manipulation of the Synod on the part of some of the bishops present.

Widening the view, the progressive world is now called upon to undergo a reality check. Several of the projected reforms – proposed as if the Church were an NGO, something the Pope clearly rejects – are stalled. During the last week, Lord Christopher Patten, who chaired the Committee for Communications, made public his committee’s final report proposals in a lecture for the World Day of Communication. The final report reads in fact like an strategic plan for a company, one focused very much on structures, not on the transmission of the message (the core of Church’s mission). Not surprisingly, a commission to evaluate the committee’s conclusions was recently appointed. And also not surprisingly, Lord Patten spoke in his address about this commission in an attempt to establish a point of no return in this discussion.

Widening the view even more, there is the reform of Vatican finances, initiated by Benedict XVI and decisively carried forward by Pope Francis. The rhetoric with which the Institute for Religious Works – informally known as the Vatican bank – continues to insist in its annual report that “cases, where the IOR was subjected to abuse in the past, have been reported to the competent Vatican authorities” in order to mark a break with the past, is offset in tone by the publication of the report of the Financial Information Authority. This latter report demonstrates without any media hype that an operational system is at work in the Vatican to prevent abuses and achieve full transparence. As clearly explained by Tommaso Di Ruzza, Financial Intelligence Authority director, in an exclusive interview with ACI Group, this system is in full compliance with international standards to the extent that internal norms are applied – a system that does not have to follow international standards, but that knows how to exist in the world thanks to the good of the work it performs. This consciousness should be applied to the entire Church.

But progressives, anxious to adapt the Church to the principles of the world, have adopted secular language. The ultimate goal, the announcement of the Gospel, seems to be lost. But this goal is very much taken into consideration by the “Hidden Vatican.” Despite the dark times during the external consultations, despite the difficult times when the Pope was suspicious of everyone while seeking to make a decision, the hidden Vatican continued working for a Church in a manner consistent with its mission and its teaching in the world. Pope Francis’ and Cardinal Parolin’s words this last week proved that in the end the Pope has decided to follow this direction. Will he know how to follow through?

3 Responses to Pope Francis, Between the Shadow Synod and a New Direction