Pope Francis: Beyond the Submerged Schism 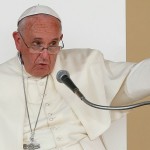 The “lineamenta” (guidelines) of the forthcoming synod on young people, published January13, paved the way to a new path for the synod. Much has changed since the times when it was thought that the Synod of Bishops was going to gain more importance in the Curia – the chair of the first meetings of the heads of Vatican dicasteries under Pope Francis was Cardinal Baldisseri, the General Secretary of the Synod of Bishops. In the meantime, a major role for the Synod of Bishops in papal elections, on the basis of a plan of Pope Paul VI, was rumored. At the moment, nothing of that sort seems to be in the immediate offing. The synod becomes just an occasion for a discussion, and a papal excuse to tackle issues his way.

The debate after the synods on the family

This is proven by the discussion which arose on the issue of the civilly divorced and remarried, that caught fire over the interpretation of a footnote of “Amoris Laetitia” and culminated with the publication of the “dubia” of four cardinals. This publication showed that there is a wide range of opinions within the Vatican world, though almost all want to preserve the traditional teaching. Among these latter, on the one hand, there are those who share all the issues raised by the “dubia,” but who would have not made them public, and would have acted more prudently. On the other hand, there are those who – like the cardinals who promoted and the divulged the “dubia” – think that a clarification is needed for the Church’s sake, and that this clarification should come directly from the Pope.

Both of these positions are legitimate. The second position is shared by many cardinals and bishops, as well as by some priests who do not understand how to exercise the required discernment with divorced and remarried Catholics. Reading the mainstream, the issue of the “dubia” seemed to be just a dialectical issue, detached from the people of God. In fact, the issues are really pragmatic, and, being in doubt, many priests either take initiatives that somehow detach them from the doctrine of the Church, or hook their own initiatives to that doctrine without the creative ability to adapt it to real situations.

As the Pope has not yet responded to the “dubia,” the cardinal signatories are also thinking about the possibility of issuing a formal correction to the Pope. But if a formal correction will be forthcoming, it will not come in the way that has been heretofore understood. Cardinal Walter Brandmueller, one of the signatories, said that this correction should be handled in private, but others think it can be done publicly. Either way, it will not be a slap in the Pope’s face. It will simply be a theological response to the questions posed by the “dubia”. In fact, the Congregation for the Doctrine of the Faith already responded some years ago to a similar question coming from a French priest, made public some time ago on the official Vatican website. So in the end, there is already a “responsum” to the “dubia,” and the correction of the four cardinals would not be much different from it.

Whether made public or not, any initiative in that sense comes from the need to clarify finally a confused situation by giving a fair response that put things in order and gives support to doctrine. It is doctrine, in the end, that unifies the Church and creates that deep reason for which there must be union with Peter. Even the advancement of local churches is born from their union with Peter. Otherwise, there can be schism.

The preoccupation over a submerged schism

The discussion that followed the Second Vatican Council often focused on a “submerged schism”, that is, the schism that divides the lives of regular Catholics from Catholic doctrine. Those who spoke about a submerged schism wanted a Church more in tune with secular issues, more understanding toward modern times and less anchored to almost unreachable ideals. These words and claims came out almost in the same manner during the debates surrounding the two synods on the family, by those bishops that proved themselves to be more attentive to an agenda of mercy in the name of a greater inclusivity within the Catholic Church – for instance, the German bishops led by Cardinal Reinhard Marx.

The “submerged schism” is equivalent to the “pragmatic schism” feared by other cardinals, like Cardinal Mueller in an interview granted last year. Lately, the possibility of a schism in the Church in Latin America came out, in an analysis written by an Italian website, Campari & De Maistre. This is worth a read.

Is everything set for a Latin American schism?

The text underscores that “the big schisms which occurred in the Catholic Church” had a “contingent historical-political basis”, and a first cause which was “anthropological and cultural”. For example, the Orthodox schism took place after a doctrinal dispute, but in fact dealt “with the way to organize the family, social, juridical and political structures” that was different from the Latin world. The schism was consummated when the process of maturation of Slavic society was concluded.

Even the Calvinist, Lutheran and Anglican schisms took place almost in the same period, during the 16th century: they all had “different historical and political” premises, but they took place when “an Anglo-Saxon world” that diverged from the Catholic world on the basis of “the way it conceived society, from civil rights to family rights to the way to live in community.” These variances evolved into a schism only when geopolitical borders and differences took a final shape.

Now – the analysis continues – “the Latin American world is characterized by a specific shame from political, economic, social and religious points of view” and five centuries after colonization it is moving toward “a new doctrine of Christian origins that mixes Protestantism with Marxism together with elements of colonial Catholicism.” For this reason, the Latin American world was subject to special surveillance over the tendencies that derived from Liberation Theology, over the hemorrhaging of Catholic faithful in favor of sects, and over the problem of a Church that has always been mixed in with the social-political framework, since only the Church has always possessed the authority and authoritativeness needed to be on the side of the poor.

According to the article, Latin America now has “all the elements of a schism: first, because a politically important trend, both within clergy and society, follows a new interpretation of the Christian doctrine, different from that traditionally practiced for 2,000 years in the Catholic Church; second, because, as happened with the Slavic and Anglo-Saxon peoples, Latin Americans are essentially living a process of vast socio-cultural evolution, with a homogeneous territorial – and hence, geopolitical – foundation that is then translated into a theological discourse that is potentially schismatic.”

Is this really the era in which we are living? Certainly, Pope Francis represents that Latin American trend that is seeking its dignity, and the fact that he adopted the Theology of People makes him a man of compromise between the Marxist excesses of Liberation Theology and the popular piety that represents the only strength of faith of a continent on the move. Pope Francis’s speeches, especially those delivered to popular movements, are part of the agenda that, one way or another, was part of the Church of Latin American and its extraordinary closeness to a people that is still undergoing difficulties.

At the same time, the sympathies which Pope Francis arouses in the secular world are also the sympathies of those who want the Church to be less committed to talking to the powerful of the earth, and who want to see it disincarnated by the current world situation and reduced to a sort of NGO that advocates for poor, a Church that performs works that are widely appreciated but at the same time one that is shrunken to a marginal voice in the international arena. The Pope seems to hit the target when he says that the Church is not a merciful NGO, which he does since the beginning of the pontificate.

The safe haven of doctrine

Nevertheless, if there is one thing that has kept the Catholic Church together despite all the social and political turmoil that has stricken the world, it is its complete adherence to a single, unique and revealed doctrine. The Church has survived because it has always had its gaze set on Jesus, the one thing needed to make a real Christian life, as Pope Francis recently reiterated during a Mass in the Domus Sanctae Marthae. For this reason, Pope Benedict XVI wanted to add the words “in Him” to the theme of the 2007 CELAM conference at Aparecida, whose theme at the beginning was simply: “Disciples and Missionary of Jesus Christ so that our people will have life.” That document is also a reference point for Pope Francis.

If the social-political schism is almost consummated, it is also true that there is a doctrine to preserve, and everyone is trying to do it in the most proper way. This is how we get back to the “Amoris Laetitia” message and the way the “dubia” are being addressed. Thinking that the “dubia” should have remained private does not mean not recognizing that the questions are valid. It means thinking about the opportuneness of such a move. It means trying to understand whether in this general climate the creation of the conditions for a doctrinal conflict is the strategically correct step to take or not, whether such a move might just accelerate some of the on-going trends which are worrying everyone. This is a huge moment of transition, yet to be defined.