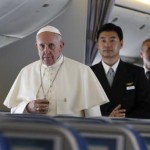 Pope Francis proved once more that praxis is more important to him than doctrine during the in-flight press conference coming back from Mexico when he mentioned the “famous” case of the Congolese nuns allegedly permitted to take the contraceptive pill because of a danger of rape. Yet, this same sentence – analyzed, discussed and even dismissed in blogs and media outlets (Paul VI never in fact said those words) – demonstrates one more thing: that communicating the Pope is always more a matter of crisis communication – and this is the way Vatican media should treat it.

Msgr. Dario Edoardo Viganò, Prefect of the recently established Secretariat for Communications, asked employees of Vatican Radio and Television to pay more attention to crisis communication during a meeting with them that took place February 25. Msgr. Viganò gave the specific example of “external pressures” such as those of the so-called “Pell case” involving accusations against Cardinal George Pell over an alleged cover up of abuses. The example provided was intended to explain that the Church’s communications must be more proactive. It therefore must not just rehearse the positive contributions made through the numerous initiatives the Church has undertaken everywhere in the world. Vatican media – Msgr. Viganò argued – are obviously responsible for giving out this information. But Vatican communications – he added – must take into account the external pressures. It must be able to foresee them, and even to counteract them.

One of the issues never explicitly mentioned, but very much present is that the way Pope Francis communicates forces the Church to perform continually crisis communication. And the recent media furor over the alleged use of contraceptives by Congolese nuns is a prime example.

Pope Francis evidently assumes the veracity of the urban legend that Paul VI accepted the use of contraception by the nuns as a lesser evil in extreme situations. And by making this claim, Francis made it official, despite the fact that all of Paul VI’s biographies insist that he was firm in opposing contraception. Moreover, Paul VI, in one of the audiences given to the Commission entrusted with studying the birth control issue, requested that they make use only of “non ambiguous statements.”

But as much as Paul VI (whom Pope Francis called “a hero” many times) would insist that others not be ambiguous, so much does Pope Francis speak in a way that leaves matters open and ambiguous. Pope Francis’ sentences are conditioned by the experience of very pragmatic issues, for example, by a painful solution given to a situation that he faced in the confessional. These are, in the end, the fruit of his experience of the Church as a “field hospital,” called to apply first-aid to wounds. But they are also affected by a short-sighted vision, more than a long-sighted one.

But likewise, when we think in longer terms, we find a more orthodox Pope Francis who describes himself as a son of the Church, the “Holy Hierarchical Mother”, and who is imbued with a very strong Ignatian spirituality. Yet, his way of reasoning, his way of putting praxis before doctrine, leads him to be the subject of all kinds of exploitation.

This is why communication about the Church, and above all communication about this Pope, is always crisis communication: because the Pope’s words, spoken in personal conversation, in off-the-cuff remarks, in interviews that the Vatican bureaucracy is not aware of, generate a tilt. Whether the tilt is serious or not must be assessed case-by-case. Certainly, it can be easily manipulated.

Today, crisis communication is not just about responding to the attacks launched from the Church’s external enemies.

For example, the Holy See and Bishops in Belgium last week defended themselves against a class action suit asking for damages in clergy sex abuses cases. The Court of Appeals in Gent stated  that the Court has no jurisdiction over the Holy See, and that claims against the Belgian bishops and religious congregations were brought in violation of the Belgian code for civil procedure. To summarize: an abstract case against unspecified general “policy faults” cannot be brought against the Church, and plaintiffs must address themselves specifically against those who commit the fault, explaining precisely what the fault is, how it caused damage. This is only the judgment in the civil case for damages (the criminal case is still pending), but it is however a good point for the Church. Why has no one involved in the Holy See’s communications issued a statement, explained the case, and in the end moved public opinion toward acceptance of the Holy See’s reasoning in this matter? Why did no one in the Holy See notice the attack against its sovereignty, one that has nothing to do with the principle of just accountability according to which the party who is guilty of a crime must be prosecuted?

A proactive response to these issues is clearly needed. But the Pope also needs help in building a new narrative when he speaks off-script, because he sometimes contradicts himself. At the moment, the first impression is that the Pope, more than simply being alone in command, is in fact being left alone in command. Pope Francis loves to make decisions by himself, but at the same time he is also exploited by those who are developing an agenda behind his back.

It is easy to notice that any time Pope Francis speaks off script, especially when he is not fully precise with terms, there is a wide range of people – not only from the secular world – that take advantage of his words to claim that the Church is living a new era and to exalt the Pope’s new approach. In the end, they cast Pope Francis’ words way beyond his real intentions. This happens often, so often that the Pope felt the need to explain – for instance – that his famous sentence “Who am I to judge?” referring to gay people, is taken directly from the Catechism of the Catholic Church; to clarify that people divorced and civilly remarried cannot receive sacramental communion; to justify – and he does consistently more often – that his social though is not communist (during his last general audience, recalling Isaiah’s words, he joked: “and Isaiah was not a Communist”).

Looking at the way the reform is being designed, we would answer ‘No’. The reform of communications is being described in terms of a major power reshuffle, and this might even be true. But this description does not fit all the criteria. For example, Vatican Radio remains still in the Jesuits’ hands. Fr. Federico Lombardi, SJ, is no longer the Director General because the Directorate-General has become an office that covers all media departments, not only radio. But the Programme Director is Fr. Andrzej Majewski, and he is a Jesuit. Jesuits have always been entrusted with overseeing the Radio, and only a Pope can take this mission away from them. Pope Francis will hardly do this.

The editorial department should be responsible for content and the way it is channeled, and for the moment Msgr. Viganò will take over this responsibility. In fact, before having unified content for all Vatican media departments, they must be conjoined: Vatican Radio and Television will be unified by 2016, then the new dicastery will take over the competences of the Typography, the Vatican Publishing House (the LEV), and so on.

The institutional department is represented by the Holy See Press Office, but it is something not included in the Secretariat for Communications. The press office publicizes information concerning the pope and his activities, distributes papal speeches and provides official information concerning the Holy See and Vatican City State. This activity still comes under the aegis of Vatican Secretariat of State, which, in spite of any stated reform project, has so far held onto its functions and maintained a central role in the on-going reform.

In the end, the design for the reform of Vatican communication is mostly managerial with the aim of saving money and generating profits. Communication techniques will change, but nothing will change in the way the message is delivered. Because the management of the message will still be in the hands of the Secretariat of State, it will be called upon to deal with communication issues.

The reform process of Vatican communications demonstrates a more general point in terms of Vatican reforms. The reform of the Roman Curia, the economic reform, and the communication reform respond to the need to cut expenses and generate revenues. Cardinal George Pell, Prefect of the Secretariat for the Economy, clearly explained this when he presented the major reform of Vatican finances in July 2014.

Behind this reform still lies the problem of the encroachment of interests that Pope Benedict XVI tried to undo, and that is now strongly back in place under this pontificate. Cardinal Pell is the subject of a very strong, ugly media campaign. Strikes against him are repeated even as he is preparing to give testimony before the Royal Commission in Australia to respond to accusations of having covered up sex abuse against minors when he was Archbishop of Melbourne. These strikes help us to understand that, in the end, poisonings within the Vatican walls are still persistent. Even the new Vatileaks trial – which is going to be re-opened now – is a clear demonstration of this fact.

In fact, the current discussion is now back to what it was 30 years ago. The debate on the hermeneutic of the Second Vatican Council has been restored, and just a few (always from a certain theological part) claim their right to speak about theology, silencing all the other opinions by labelling them as “conservative” or “outdated”. When New York Times’ columnist Ross Douthat tried to get into the debate from a completely secular perspective, he was subjected to heavy attacks. Douthat also underscored the crisis of content in Pope Francis’ pontificate, with a provocative comparison with Donald Trump.

Certainly, this crisis of content requires a new form of communication. Pope Francis’ pontificate is, once again, suspended between the Gospel and the spin doctors. The upcoming delivery of the post-synodal apostolic exhortation will establish which direction the Pope has taken.