Pope Francis, deciphering his speech to the Curia 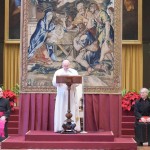 What if the Christmas address to the Roman Curia was Pope Francis’s last? A few days after the delivery of that speech, rumors spread that Pope Francis could renounce his pontificate, as Benedict XVI had already done, between Christmas and New Year. The rumors were credited by an alleged comment by Austen Ivereigh, who considers himself the Pope’s biographer and who wrote a book-interview about him. Ivereigh, by the way, dismissed that he ever commented on that. It was, in the end, a fake news.

It is anyway worth to look into the hypothesis, that is far from reality and suggestive at the same time. Although it is true that, when Bergoglio was elected, the rumors spoke of “three or four years of Bergoglio,” enough to change the Church, and that Pope Francis has repeatedly considered Benedict XVI’s decision prophetic; it is also true that Pope Francis does not seem the kind of person who would renounce the pontificate, and does not seem to want to do so while Benedict XVI is still alive.

All in all, however, this suggestive hypothesis also allows us to look at Pope Francis’ speech to the Curia from a different perspective: what would we say about that speech if this were to be considered his legacy?

Pope Francis has turned the speeches to the Curia into an occasion to monitor who the Pope would attack. From the address on the 16 curial diseases, the Pope has always maintained the line of teasing the Curia on various and different themes. Not only. The Christmas speeches also represent responses to the criticisms leveled at him. For example, this was the 2016 speech, in which he outlined one by one the reforms that had been implemented.

The speech of last December 21 also responds to many observations that are made. It has been said that when the Pope attacks the Curia he also attacks the many good people who work there. However the Pope praises the Curia workers, even if this doesn’t make it to the newspapers.

And again: Is it the case that the idea of reform of the Curia has been criticized in the way it has been implemented in this last period? The Pope warns against relying only on the drafting of an apostolic constitution to define the Curia’s reform.

Is Pope Francis accused of creating conflict? The Pope explains that he loves crises because crises are opportunities to be accepted, but that disputes are to be avoided. For the Pope, a crisis brings on a path, while conflict feeds gossips and self-referentiality.

The proverb says: “In cauda venenum,” the poison is at the end. And in fact, at the end of the day, Pope Francis asks the members of the Curia for the Christmas gift of “generous and passionate collaboration in the good news, especially towards the poor.”

And then: “Let no one voluntarily obstruct the work that the Lord is doing at this moment, and we ask for the gift of the humility of service so that He may grow and we diminish.”

These are two sentences that have the tone of the programmatic speech. On the one hand, he asks for collaboration, implying that there is resistance to his ideas. On the other hand, with a peremptory statement, Pope Francis, in fact, “excommunicates” all kinds of criticism.

In practice, any criticism of the Pope’s work is taken as an act of lack of humility of service and an obstacle to the work that the Lord is doing. On the other hand, Pope Francis has always said it: when he realized that he was about to be elected, peace immediately fell upon him. He is convinced that the election is a sort of legitimation of the Holy Spirit for his work.

A sort of identification has been created between the Pope and the institution, that has created more than one problem. There is constant talk of a Pope Francis who faces resistance of all kinds. But which Pope has not faced opposition? The difference is that, with Pope Francis, any resistance is considered an act of treason.

The request to pass from a logic of conflict to a logic of crisis is interesting in his speech to the Curia. It almost seems like a contradiction because it is evident that many of the disputes that have arisen were wanted by Pope Francis.

As a Jesuit, Pope Francis is a provocateur; he wants open processes and therefore favors discussions. He did so with the two Synods on the family, for example, because Amoris Laetitia leaves the idea of a Synod always open. He did it with the choices on reforms, authorizing completely different reform processes, up to the synthesis. He did it when he chose to keep some men and rotated others, replacing the old guard.

For example, the decision to call Cardinals Odilo Scherer and Petr Erdo to the Council for the Economy, and the decision to confirm Cardinal Robert Sarah at the head of the Congregation for Divine Worship, stand in contrast to the early decision to leave Cardinal Scherer out from essential positions that he had, or to the marginalization of Cardinal Sarah in the debate on the authorizations of translations of liturgical books.

Pope Francis causes the crisis, but in reality, Pope Francis’ crisis is more appropriately called conflict. There is not a single line of interpretation because the Pope considers them all valid. If he wants to reach a goal, he allows more people to work on it differently. Only at the end will Pope Francis choose the path he deems appropriate. It means that all the others, who have taken different approaches, suddenly discover their work’s uselessness.

This is why divisions arise. Even the very fact that the speech to the Curia is expected to be the moment of the year when the Pope will attack some curial attitude shows that the Pope creates division, lives in conflict, and asks that it be accepted. It is a Pope who reaffirms he is in command and interprets synodality not as a collegial government but as a government of high consultants advising the head.

These are just impressions, and perhaps Pope Francis sees his actions differently. But what he says, what he does, all points to this model of government. If the Pope resigned, he would leave a Church flattened by her leader. No one can decide because no one knows where the Pope wants to go. Open processes also mean that there is no precise direction. It would be a Church in crisis, after all, just as Pope Francis likes it. It is an issue not to be underestimated in a future conclave.

3 Responses to Pope Francis, deciphering his speech to the Curia