Pope Francis and the Issues of Ideological Colonization Pope Francis: Peripheries in the Middle

Pope Francis: Diplomacy and the Role of Religions 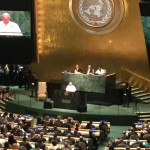 What is the Holy See’s latest mission? To take religions out of the ghetto where they have been abandoned as a result of public opinion and radicalism. This mission seemed to be the main theme behind the speeches that Cardinal Pietro Parolin, Vatican Secretary of State, delivered at the United Nations.

In New York during the week that inaugurated the 71st UN session with an unprecedented summit on immigration, Cardinal Parolin reiterated some of the hot button issues in almost every speech. First, that civil society must lean on faith-based organizations, as these really work on the ground. Second, that these organization are enduring a certain prejudice generated by the spread of religious radicalism combined with a media campaign that identifies in religions a source of intolerance. And third, that the seeds of fraternity lie within religious sentiment, and that this sentiment is the basis for a peaceful cohabitation.

Holy See diplomacy is thus putting into action the gigantic effort of changing the perception of religion, exploiting the huge impact that Pope Francis has on public opinion. This impact was certified by “Laudato Si”, the encyclical on the care of our common home that was read with interest also by members of the American political world and by members and officials of the United Nations.

There are many reasons why Pope Francis arouses so many expectations in the secular world. In general, he takes on social justice issues with which the secular world can agree, and there are so many of these that they can even overshadow Pope Francis’s campaigns against gender theory and in favor of the right to life. When the Pope tackles social justice issues, politicians feel challenged in their fields of interest, and in speaking about these issues, the Pope does not challenge them to deal with matters that can make them feel uncomfortable, such as abortion.

At the same time, Cardinal Parolin’s diplomatic commitment fully corresponds to the Pope’s commitment to interreligious dialogue. The Pope’s presence at Assisi’s prayer for peace on September 20 proved Francis’s intention to work more in that field.

What to make of religions as weapons of peace? Pope Francis is developing a pragmatic tactic. Religions can work together to help refugees, and this is the reason that the Pope endorsed the humanitarian corridors operated by Sant’Egidio – operated in collaboration with Protestant communities – and celebrated the Holy Thursday Maas  at CARA (a refugee camp) in Castelnuovo di Porto, near Rome, a structure supported by many evangelical groups. As they do not feel challenged from a theological point of view, other religions are more comfortable in establishing a relationship of this kind with the Catholic Church. This is the culture of the encounter that Pope Francis always preaches.

Cardinal Parolin is trying to introduce the culture of the encounter into diplomatic work. Difficulties are not few. Cardinal Parolin needs to avoid making of religions a secular tool, while the Catholic Church is called to fulfil its own mission.

For this reason, the Vatican Secretary of State proposed a while ago to establish within the Vatican State Secretariat an Office for Pontifical Mediation. And for this reason, right after the week at the UN in New York, Parolin will fly to Bogotà, Colombia, to take part in the signing of the agreement between the Colombian government and FARC. In conflicts, the Holy See does not take strong stances on behalf of one or the other parties, but it works as a facilitator, even risking being “exploited”, as happened in the US-Cuba talks that brought about the restoration of diplomatic ties between the two countries.

Beyond the so called “diplomacie diplomaticienne” (diplomacy for diplomacy’s sake) religions also need to be freed from the ghettoes where they were relegated by episodes of religious radicalization. The Secretariat of State has being undertaking this task for some time now, through various interventions. The speeches at the UN are just the climax of a line of argument aimed at praising religions and condemning religious radicalization.

With these speeches, the Holy See also gets a sort of validation from other religions, whose dignity is protected in the international arena by the only religion that – in the name of “libertas ecclesiae” – has a sovereign State and a presence at the UN that cannot be compared to that of an NGO.

Nevertheless, the issue of Holy See sovereignty is particularly sensitive, and in addition there is an internal debate within the Vatican over the question: “How do we preserve sovereignty and at the same time help our faithful?” This is the conundrum.

The most widely discussed case is that of China. In order to resolve the impasse with the Beijing government over the appointment of bishops, the Vatican is apparently keen to accept a procedure to appoint new bishops that would involve a prior dialogue with the government of Beijing. In order to resolve the other impasse that deals with diplomatic relations, the Holy See has not yet appointed a Chargé d’affairs in the nunciature in Taiwan. The presence of a nunciature in Taiwan one of the major hurdles to establishing diplomatic ties with Beijing.

Is this a return of Vatican Ostpolitik, as it was put by Cardinal Joseph Zen Zekiung, Archbishop Emeritus of Hong Kong? Not precisely. Taiwan’s vice president was in Rome for the Mother Teresa’s canonization, and personally greeted the Pope, claiming good relations with the Holy See. And this last week, after Bishop Vincent Zhu Zeifang of Wenzhou died – he was one of the loudest Chinese voices against the removal of crosses that is taking place in some parts of the China – the Holy See confirmed that Bishop Peter Shao Zumin, already appointed coadjutor of the diocese, took over the post of Bishop of Wenzhou. The confirmation of the appointment came with a press release that the Congregation for the Evangelization of Peoples wrote carefully and made available after approval of the appointment was granted, with indications that not even a comma of the release had to be changed.

To understand how meaningful this is, it is noteworthy that Bishop Shao was never recognized by the Patriotic Association (the Chinese Church organization linked to the government) and that, just after the very crowded funeral of Bishop Zhu, Bishop Zao was reportedly taken in custody by Chinese authorities. Is this a signal that despite the imminent agreement with the government, the Holy See is not going to concede anything in the appointment of bishops?

How things will proceed is yet to be seen. In this case as well, the Pope will try to find a solution in line with the “culture of the encounter,” while diplomacy will try to find an arrangement without harming the “libertas ecclesiae.”

As relations are now going through a thaw, it is even possible that there will be some gesture from the Pope. There are rumors in Vatican corridors of a top-secret event on “Laudato Si” that will very soon take place with a Chinese delegation – an event to which the Pope might show up, as a bridge to China.

Even in this case, it will have to be clarified how this bridge will help to preserve the Church’s freedom. The priority, however, is that of helping Christians in the minority and at the same time to sign a sort of “holy alliance” with other religions. Catholicism and other religions have in the end a common enemy, that is, the secular world. The real challenge is to revive a positive perspective on religion, beyond any political or diplomatic choice.